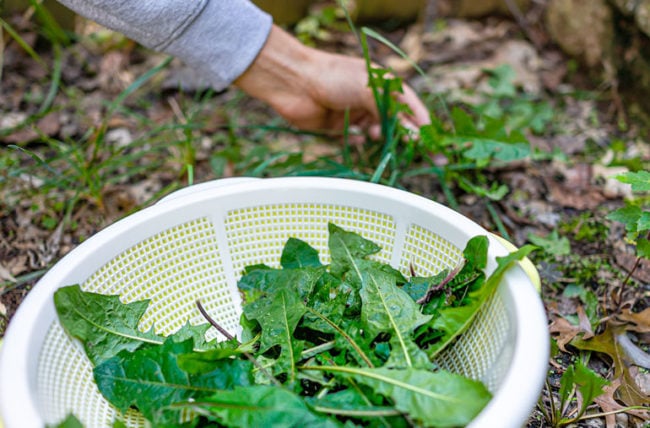 The spring and summer seasons are the perfect time for hiking and exploring nature. But have you ever walked passed an interesting berry, plant or fungus and wondered if were edible?

Surprisingly, edible plants can be found in many natural spaces around us. Whether it’s for your own curiosity or knowing what you can snack on during long hikes, learning how to forage plants can be a useful and fun skill to learn. Not only that, it’s a good way to grab some healthy greens and fruits straight from the source.

But there are a couple things you should know before trying to forage on your own. Registered dietitian Beth Czerwony, RD explains what foraging is and how to be prepared and informed.

Throughout history, foraging — which is the act of gathering food from the wild — ­­has been a large part of human survival. While in our modern world we’ve become used to picking things up at the grocery store or even online, nature has its own produce aisle as well.

“Nature has its own food source and a lot of the birds and deer and other wildlife live off of those things,” says Czerwony.

But you should always take the time to research, consult an expert or even take a class on foraging to make sure you know what you’re searching for. Czerwony stresses that there can be a lot of plants that might be edible for animals, but poisonous to humans.

“You should never try something if you are not for sure that it is safe,” cautions Czerwony. “The other important thing to understand is that there are parts of the plant that are edible versus some that are not.”

Where to go foraging

Your first step is to learn where you’ll be able to successfully forage, as you can’t just go anywhere with a patch of green grass. Czerwony says that many areas aren’t the optimal place for plants to grow. You want to go somewhere that’s as untouched by humans as possible, such as open fields and parks.

Czerwony also points out that it’s important to make sure to ask for permission before picking plants at national parks or reservoirs that may have certain have certain restrictions. While your local metro park or state park is probably a good place to forage, there may be certain rules in place based on your location. Also, be sure to avoid private property or residences.

What can you eat out in the wild?

So, how do you start foraging? It’s critical to know what NOT to eat in order to avoid poisonous or possibly toxic plants.

Timing is also important, as Czerwony points out that springtime is when many plants are in a good, ripe state for consumption.

“In the summer, those plants have gotten a little bit older and the leaves could be a little bit more bitter,” says Czerwony. “So you’re not going to get the most benefit out of it.”

Here are some examples of edible plants you can find in the wild:

Also commonly known as wild onion and garlic, ramps can be identified by their flat leaves and distinct smell. When finding these, Czerwony notes it’s important to just harvest the leaves, so the bulbs can be left to regenerate.

“A lot of times, because they grow inconspicuously, people don’t see them,” says Czerwony. “You can pick up on that garlicky smell as you’re hiking, so that’s a good indicator.”

With ramps, it’s important to pay close attention to their leaf structure, as they resemble Lily of the Valley, which is a poisonous plant. Be sure you can confidently distinguish ramps from Lily of the Valley before you try foraging them.

Nettles are a common plant that you may come across during a hike or forest walk. They’re most known for having tiny stingers that get caught on your jacket. So, it’s important to prep these plants properly before you consume them. “You can actually use them as a substitute for spinach,” says Czerwony. “You have to rinse them off, boil them and then you’ll be able to scrape those little stingers off, and then you’ll be able to enjoy them.”

The familiar weed can be more than just a nuisance in your garden. The leaves, root and petals of the dandelion can be used in various ways. Throw the leaves in a spring salad or even use the roots as a substitute for coffee.

“You can use almost the entire dandelion,” says Czerwony. “The only thing that you can’t is the actual stem. It has a milky, bitter taste.”

You can recognize this plant by its bright yellow blossoms.

There are many different types of wild berries found in nature, but as a safety rule, it’s good to stick with the most easily distinguishable ones. Czerwony points out that while some may look similar in color, it’s better to go for the ones that you know for sure are safe to eat.

Look for the berries that are easy to identify, like:

In addition, there are also berries that you should avoid and make sure you aren’t misidentifying such as:

What should you avoid completely when foraging?

There are some general plants that you should try and stay away from, especially if you’re a beginner.

Czerwony also recommends that as you’re foraging to keep track of the plants you come across by taking a photo. And especially if you suspect that you or someone you’re with has consumed something poisonous, be sure to bring a photo (or the plant itself) with you to the emergency room so appropriate treatment can be initiated.

Before making your way into the woods, take some time to familiarize yourself with the edible and poisonous plants in your area. Take a class in your community or seek advice from a local park ranger to ensure you’re fully informed before beginning to forage.

What To Know Before You Try Digestive Bitters

How to Safely Handle Deer Meat Ever walked by a berry bush and wondered if the fruit was edible? Or wanted to harvest some dandelions to make your own tea? A nutrition specialist explains what to know before you go foraging.