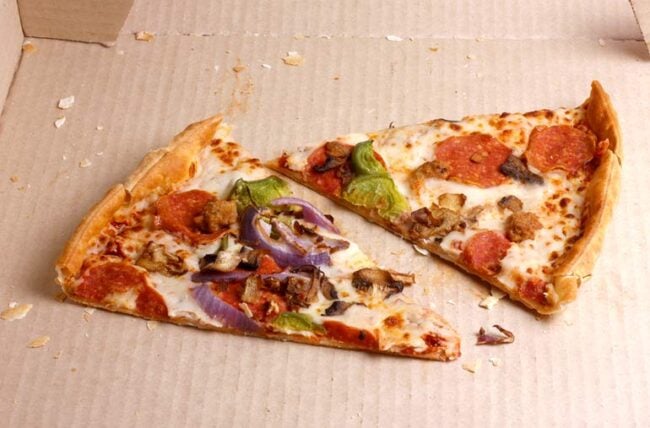 Cold pizza is one of life’s greatest pleasures. It won’t burn the roof of your mouth like piping hot pizza — and, in terms of a once-in-a-while breakfast treat, a tasty slice of cold pizza is hard to beat.

In most cases, you’ll grab a slice from the fridge when you’re hungry. But what if you have a late-night pizza at a hotel and don’t have a place to store it? Or what if your fridge is full? Can you leave pizza sitting out overnight and still munch on it the next day?

Registered dietitian Fawziah Saleh, MS, RDN, LD, says that’s not a good idea. “Perishable foods like pizza are not safe to eat if left sitting out in room temperature overnight.”

There’s more bad news, too: It doesn’t matter if your pizza was plain cheese, packed with veggies or a meat lover’s delight — Saleh says you still can’t leave it on the counter and have it for breakfast the next morning. “Because cheese is the main ingredient, pizzas should be kept in the refrigerator to reduce the risk of being contaminated with food-borne bacteria.”

How long can pizza safely sit out?

Believe it or not, pizza can only be left out safely for two hours at room temperature. At higher temperatures, it’s safe to be left out for just one hour.

“Anything outside of the temperature danger zone — which is between 41 to 135 degrees Fahrenheit (5 to 57 degrees Celsius) — is what you want to avoid,” advises Saleh. “According to the USDA, after two hours, you want to either heat the pizza back up or put it in the refrigerator to cool it down. So, say you’re putting pizza in the microwave or heating it up in the oven … As long as you get it out of that 135-degree F (57-degree C) range, then you should be OK.”

If you’re eating vegan cheese pizza, these same rules also apply. Vegan cheese is considered a perishable food item, so you need to make sure it’s only left out at room temperature for two hours.

Dangers of eating pizza that’s been out too long

So, you’re probably wondering: What happens if I eat pizza left out overnight? Well, this increases your risk of getting food poisoning or contracting a food-borne illness.

Food-borne illnesses can be serious and be things like:

Signs of food poisoning include an upset stomach, nausea and vomiting, or feeling stomach pain going to the bathroom. Symptoms of food poisoning or food-borne illnesses can show up within hours after you eat contaminated food or several days later.

“That’s why a lot of people go back and think, ‘What did I eat that caused me to get sick? Oh, I know — I ate at that restaurant,'” Saleh notes.

How to store pizza safely

According to the U.S. Food and Drug Administration (FDA), you can store pizza safely in the freezer for about one to two months. Pizza in the refrigerator is also cold enough to be outside of that temperature danger zone, although it doesn’t stay fresh quite as long. Saleh says you can safely store pizza in the fridge for three to four days.

In short, if you’re craving a piece of cold pizza, just make sure you’re grabbing it from the fridge or freezer — not your kitchen counter or the end table in your hotel room. Your taste buds, and stomach, will thank you later.

How To Store Your Thanksgiving Leftovers Safely

Cool Down With These Simple Summer Drink Ideas

What Happens if You Accidentally Eat Moldy Food?

Trash It or Eat It? The Truth About Expiration Dates

Is Oatmeal Always Healthy for Breakfast? 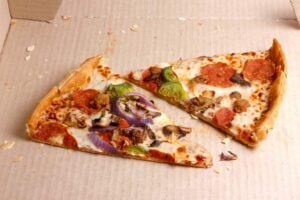 Is It Safe To Leave Pizza Out Overnight?

It might seem safe enough, but sadly, an expert shares why eating pizza that’s been left out all night isn’t a good idea.