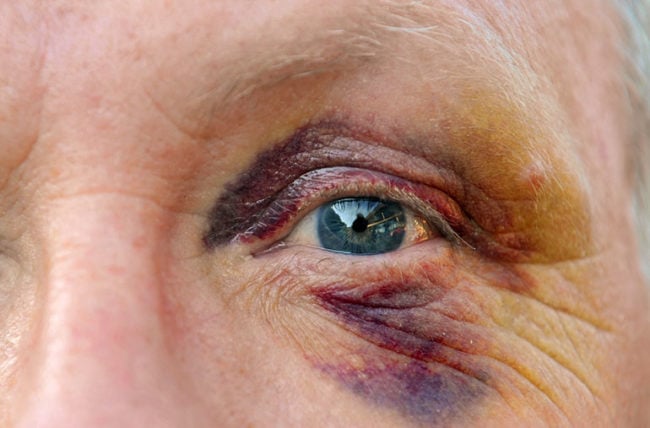 Your kid’s impressive softball pitch was impossible to catch — and now your black eye is impossible to miss. So, in an effort to avoid all of the questions and stares, is it possible to get rid of a bruise like this in a hurry?

“Unfortunately, you’ll have to be patient,” says dermatologist Alok Vij, MD. “But there are some things that may help the bruise fade more quickly.”

Black eye basics: When to see a doctor

Black eyes occur when tiny blood vessels around the eye get broken. The vessels leak blood and fluid into the area under the skin, leaving behind a telltale bruise and swelling.

Black eyes can be the aftermath of a physical injury. But they’re also common after facial surgeries and some dental or cosmetic procedures.

If you get a shiner, the first thing you should do is assess whether there’s more serious damage under the surface. Dr. Vij advises seeing a doctor if you have symptoms such as:

Treat a black eye like you would a sprained ankle or other soft-tissue injury, says Dr. Vij. That means remembering the handy acronym “RICE”: rest, ice, compression and elevation.

“Anything you do that gets your heart rate up increases the risk of swelling and bruising,” he says. Take it easy for the first day or two after the injury.

In the first two days, ice your eye to decrease swelling and stop blood and fluid from pooling. “Apply a cold compress, 20 minutes on, then 20 minutes off,” he says. (The 20 minutes off is important — constant cold exposure can damage the skin.)

Keep your head up (at least for the first day or two). “Sitting in a recliner or using some extra pillows when you sleep helps gravity work to reduce swelling,” Dr. Vij says.

What to expect as your black eye heals

Swelling typically peaks two days after the injury, so don’t be surprised if you wake up looking worse the next day. After that, it can take around two weeks for the swelling and bruising to go away.

Your eye will probably do a rainbow impression as it heals, passing from purple and blue to green and yellow before finally fading away.

Call your doctor if you notice signs that things are getting worse, not better, after the first few days. Clues of an infection or other problem include:

There’s no magic trick to make a black eye vanish. But there are some treatments that might help it fade.

There’s some evidence that this herb — available over the counter — may help bruises heal. Doctors aren’t totally sure how it works, Dr. Vij says. But some studies have found that when people took oral arnica before cosmetic surgeries like nose jobs, it reduced the extent of their bruising.

Some people also find that it helps to put topical arnica gel on bruised skin to speed up healing. Just be careful not to get it in your eyes. “A lot of the gel formulas have other ingredients that can be irritating,” he adds.

If you take blood thinners, Dr. Vij says it’s an open question whether arnica might interact with those medications. Overall, he suggests avoiding arnica in this case to avoid any complications.

Like arnica, vitamin C is available over the counter in both oral and topical forms. Some research suggests it can help blood clot, which helps reduce the amount of bruising and swelling. There are also signs that vitamin C might help clots break down as a bruise heals.

For the best chance of success with vitamin C, Dr. Vij recommends taking it orally within the first day or two of the injury. No vitamin C on hand? Eat some oranges. And if you have topical vitamin C oil, you can also apply that to the skin around the eye. (Avoid getting it in the eye since it can be irritating.)

Dermatologists can use in-office laser treatments to keep a new bruise from spreading and help it heal more quickly. To ensure that the procedure is effective, Dr. Vij recommends having it done right after your injury.

Since laser treatments are cosmetic procedures, they’re not covered by insurance. Given the cost, Dr. Vij doesn’t recommend this option unless you really need your shiner gone in a hurry. “But if you have a black eye and your wedding is coming up, it’s an option,” he says.

If lasers aren’t in your budget, you’ll have to exercise a little patience. In the meantime, there’s always concealer.

How to Get Rid of a Hickey

How Salt Can Impact Your Blood Pressure, Heart and Kidneys

Suspect a Broken Toe? How To Tell – and What Not To Do

How Do You Take Care of a Busted Lip?

What To Know About Pooping After Giving Birth 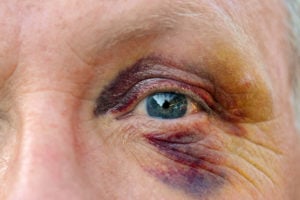 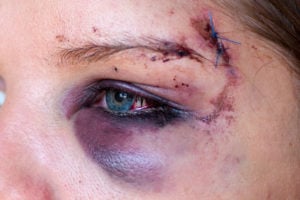 How To Get Rid of a Black Eye

You took a tumble or missed a catch. Now you have an impossible-to-miss black eye. Discover the best treatment options for it from a dermatologist.