You’re sick and feeling pretty miserable. You want relief, and you want it NOW. That probably explains how you landed on this article after Googling for “cold cures” in between coughing and sneezing.

Products such as vitamin C or zinc “immune boosters” carry some enticing feel-good promises, after all. But do they really work?

There’s no question that vitamin C is an important nutrient and a critical ally for your immune system. It’s an antioxidant that helps your body battle against illness by taking on cell-damaging free radicals.

But the nutrient isn’t magical, cautions Dr. Ford. Studies evaluating the effectiveness of therapeutic vitamin C show that it doesn’t reduce the incidence of colds.

But when it comes to recovering from a cold, vitamin C packets might help a wee bit. Researchers found that a vitamin C supplement may reduce the duration of a cold by about 8% in adults and 18% in children.

“That means you may feel better about 13 hours sooner during a typical seven-day illness,” says Dr. Ford.

An added bonus? Vitamin C also seems to slightly reduce the severity of a cold.

Of course, it might not do anything at all, too.

So, vitamin C might help, but stirring a pack of the powder into water isn’t going to have an immediate effect. Don’t expect to take it one night and be ready to go for a big event the next day.

Can zinc stop a cold?

Studies show that zinc may help shorten the duration of cold symptoms if taken within the first 24 hours — but even that hint of relief often comes at a cost.

Side effects such as bad taste and nausea were common among people who took zinc for colds. In fact, researchers advised healthcare providers to warn people about potential adverse effects.

So, basically, are the side effects worth a slight reduction in cold duration? It’s very much a lesser-of-two-evils situation.

So, what’s the best approach to fight colds?

Vitamin C and zinc are just two of many remedies touted as cures for the common cold. Some claim that elderberry can help. (Not exactly accurate.) Others say to try putting garlic up your nose. (Nope!) There’s been a push for fire cider and echinacea flower, too. (Both unproven.)

So, why do folks sometimes think they feel better after trying one of these tactics? These cold products might produce a placebo effect, where you essentially trick yourself into believing something worked.

Bottom line, though? “When you’re sick,” says Dr. Ford, “the best medicine still seems to be time, fluids and rest.

Home Remedies for the Common Cold

How Mullein Benefits Your Lungs

Common Causes for a Metallic Taste in Your Mouth

5 Vitamins That Are Best for Boosting Your Immunity

What To Eat When You Have the Flu

How Zinc Benefits Your Body — and How Much Zinc You Need 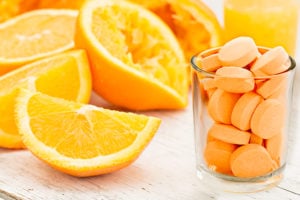 Can Vitamin C or Zinc Cure a Cold?

If you feel a cold coming on, should you spring for a product with vitamin C or zinc that promises to fight the illness off? Find out what the science says.