You know that too much sugar is the enemy of a healthy diet. So low-calorie sugar substitutes might seem like the perfect solution.

But is sucralose — aka Splenda®, aka the sweetener in the yellow packet — a healthy swap for the real thing? To find out if this popular artificial sweetener has a sour side, we spoke with registered dietician Kate Patton, RD, to get the low-down.

There are a variety of artificial sweeteners available, all of which mimic the sweet taste of sugar (sucrose) without the calories. Sucralose is unique among artificial sweeteners because it’s made from real sugar. A chemical process tweaks its chemical structure, making it 600 times sweeter than sugar — and essentially calorie-free.

Fans like sucralose because it doesn’t have a bitter aftertaste, as some fake sugars do. That may be why it’s so hard to avoid. Sucralose is in everything from sugar-free gum and soda to ice cream and yogurt. And because it remains stable in heat, you can swap it for sugar in baked goods.

The U.S. Food and Drug Administration reviewed more than 110 safety studies before approving it as a sweetener in 1998. But since then, research has raised questions about the safety of sucralose. “Although it’s generally considered safe, there are some reasons for caution,” says Patton.

Lots of people reach for diet soda and calorie-free sweeteners to keep their weight in check. But the jury is still out on whether artificial sweeteners actually help you keep off the pounds.

On the other hand, some research suggests that people who drink diet soda might end up eating more calories in food than people who drink sugar-sweetened soda. In other words, sucralose isn’t a slam dunk when it comes to weight loss.

Sucralose and the microbiome

Your gut is home to an entire community of helpful bacteria. The microbiome has several important jobs, including helping with digestion and aiding your immune system. But some studies have found that sucralose might not be so great for those tiny helpers.

Research in rodents shows that sucralose upsets the microbiome balance, and that can lead to increased inflammation.

“We know long-term inflammation can contribute to a variety of problems, including obesity and diabetes,” says Patton. “But we need more data to find out if sucralose causes the same changes in human microbiomes as it does in animals.”

When you eat a sugary treat, your body produces the hormone insulin to help stabilize the sugar in your blood. People thought that artificial sweeteners wouldn’t have the same effect. That makes sugar-free sweeteners popular among people with diabetes, who need to monitor blood sugar levels closely.

But at least one study found that in people with obesity who didn’t normally eat artificial sweeteners, sucralose could raise both blood sugar and insulin levels. “We need more research to tease this out,” says Patton. “But instead of replacing sugar with sucralose, it’s a good idea to find other ways to cut back on sugar.”

It might seem daunting to cut back on the sweet treats you’re used to. But once your tastebuds adjust, you’ll reset your sweet tooth and start to appreciate the natural sweetness of foods like fruits.

So what’s the verdict on sucralose? It’s complicated.

It’s true that research has raised some concerns. Yet scientists haven’t found any direct negative health effects in people who consume sucralose long-term. That’s true both for healthy people and those with diabetes.

“While sucralose may cause problems at higher doses, most people consume nowhere near that amount,” says Patton. “If you enjoy sucralose occasionally and in moderation, it isn’t likely to have a major effect on your health.”

Just How Bad is Diet Soda for You?

Are Artificial Sweeteners OK for Kids?

What You Need To Know About Allulose

How Healthy Is Sparkling or Mineral Water? 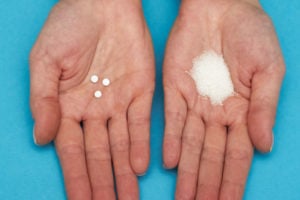 Is Sucralose (Splenda) Bad for You?

Artificial sweeteners seem like a perfect way to satisfy a sweet tooth without the calories. But is sucralose (Splenda®) really a healthy swap for sugar?