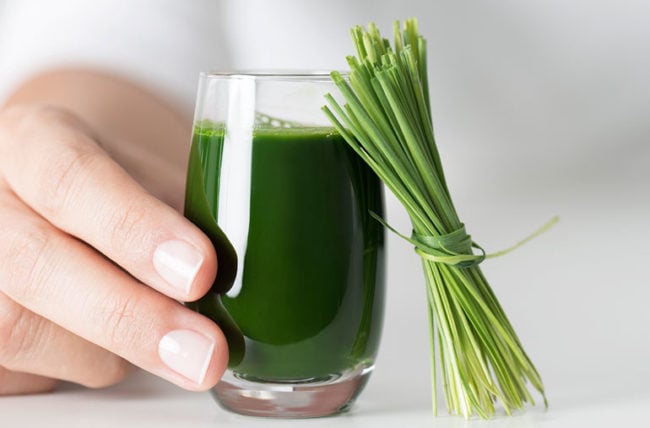 In our eternal quest to live healthier lives, we repeatedly turn to nature for inspiration.

Take wheatgrass, for example. The young shoots of a wheat plant have become a buzzworthy addition to our diets. Wheatgrass shots, anyone?

Wheatgrass is touted for its high chlorophyll content and its antioxidant and anti-inflammatory properties.

Registered dietitian Joyce Prescott, RD, talks about the potential benefits of wheatgrass and if it’s worth your time.

Wheatgrass is the green leaves of a young wheat plant. While there are many wheat species, the most common is known as Triticum aestivum.

In the first few weeks of growth, these leaves look like the grass in your yard. The wheatgrass is cut and then turned into a juice or dried and made into a powdered form. When consumed, it has an earthy taste.

The vibrant green color of wheatgrass comes from chlorophyll. Chlorophyll can increase oxygen levels in your body. The natural compound can also be found in other foods like spinach and arugula.

You can find wheatgrass juice and powder in health food stores and online. You can also find fresh-cut wheatgrass at some grocery stores. Prescott says some people even grow and juice it themselves.

“In that case, it’s the freshest,” says Prescott. “But depending on your growing strategies, it can also get contaminated with bacteria or mold from the soil that you grow it in.”

With its antioxidant, antibacterial and anti-inflammatory properties, wheatgrass has a lot of potential benefits. But Prescott says more research is needed before we fully understand how wheatgrass can help our overall health.

“The animals that were fed a combination of a high-fat diet and wheatgrass overall had decreased levels of LDL (bad) cholesterol and total cholesterol,” says Prescott.

The anti-inflammatory properties found in wheatgrass may help with chronic inflammation.

More research is needed, but it might help those who have conditions like arthritis and ulcerative colitis.

Thanks to its phytochemicals, wheatgrass may help boost your immune system.

Phytochemicals are compounds made by plants that are responsible for the wide range of colors, tastes and smells in our fruits, vegetables, nuts, seeds and grains.

Many phytochemicals work as antioxidants by counteracting the damage to cells from natural cell processes and some additional damage that occurs from lifestyle, like smoking or poor diets.

“Eating a variety of plant foods in place of foods with sugar or animal fat naturally results in decreased inflammation,” says Prescott. “That’s the basis of the Mediterranean diet and plant-based diets.”

Studies in children and young adults show promise that a daily dose of wheatgrass juice may stabilize red blood cells.

The participants in the study were dependent on regular blood transfusions due to a genetic disease that causes destruction of red blood cells.

The authors attribute the results to the antioxidant content of wheatgrass juice — it may help extend the life span of the red blood cells.

Wheatgrass may help those with Type 2 diabetes, according to an animal study.

“Researchers looked at the blood sugar-lowering effects of wheatgrass on rats,” says Prescott. “And while the exact mechanism is unknown, there was some indication that it could help.”

There’s encouraging research when it comes to cancer.

Limits side effects of chemotherapy

When used alongside chemotherapy, wheatgrass may help with the side effects.

Research shows that it can help limit changes in blood counts, while possibly decreasing the chance of infection.  It may also reduce the side effects of chemotherapy, specifically nausea.

How to get the most out of wheatgrass

You can drink wheatgrass in juice form or use it as a powder. But the earthy taste of wheatgrass can be overpowering. To help offset the strong flavor, you can try mixing it with fruit juice or even coconut water.

While many people add wheatgrass to their smoothies, wheatgrass shots are also popular. Consider adding wheatgrass to some of your recipes like salad dressings.

Wheatgrass is also available in tablet form, which can be good for those who aren’t keen on the taste.

Wheatgrass is generally considered safe to use. In some cases, you may experience nausea, appetite loss and constipation.

Prescott says it pays to be smart when adding something new to your diet.

“When starting any new supplement or concentrated extract that isn’t a part of your usual diet, you should take a small portion first,” says Prescott. “Start small and increase once you know how it affects your body.”

While the jury is still out on the benefits of wheatgrass, Prescott says there’s no harm in trying it if you’re interested.

“No single food or supplement, including wheatgrass, can make up for a poor diet or replace a well-balanced diet,” she notes. “Overall, trading sugar, animal fat and salt for a wide variety of fruits, vegetables, whole grains, nuts and seeds is a better way to improve your health.”

The Health Benefits of Pomegranates

The Health Benefits of Blueberries 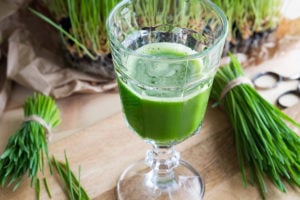 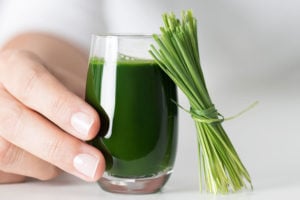 With its bright green color, wheatgrass has been hyped as a superfood. While research shows it may help with inflammation, blood sugar and cholesterol, is it something you should add to your diet?