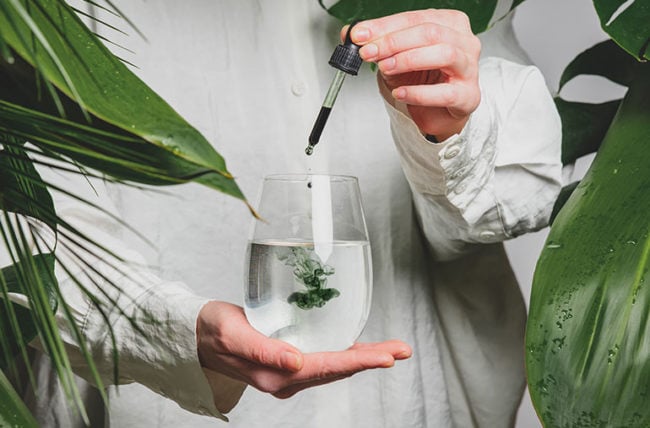 Chlorophyll is a pigment that gives plants their green color and plays a critical role in photosynthesis. If your middle school science knowledge is a tad dusty, photosynthesis is the process where plants absorb energy from sunlight to create nutrients.

Many consider chlorophyll the foundation of all life on Earth given its critical role in sustaining the plants that serve as the base block in the planet’s food chain.

But could it give you a health boost? TikTok is abuzz about the potential benefits of the plant pigment, with #chlorophyll generating hundreds of millions of views and a growing inventory of testimonials.

When you use chlorophyll drops, however, you’re not using pure chlorophyll. The green liquid supplement dripped into drinks actually is chlorophyllin, a semi-synthetic mixture of sodium copper salts derived from chlorophyll. (Chlorophyllin also can be purchased and used in topical and pill form.)

So is chlorophyll the answer to your health issues or something better left for natural science quizzes? Let’s dive into the green water and find out with registered dietitian Beth Czerwony, RD.

What are the claimed health benefits of chlorophyll?

Chlorophyll’s reputation as a health and wellness supplement predates the recent TikTok-fueled interest by decades. It has long been touted for a wide range of health benefits, including:

So does chlorophyll live up to that Swiss Army knife resume? Research has verified certain antioxidant and anti-inflammatory properties, but Czerwony cautions against it being considered a cure-all for any of the above issues.

“If something truly worked for all of that,” Czerwony says, “it’s safe to say it wouldn’t be a secret just exposed to the world through TikTok. There’s reason for skepticism.”

Researchers at Oregon State University’s Linus Pauling Institute found no toxic effects attributed to chlorophyllin in decades of human use. Czerwony says it appears safe when used in moderation.

“Would I recommend it? No,” says Czerwony. “Plants need chlorophyll far more than we do. It’s really not necessary. But if you wanted to try it, there’s no real harm.”

There are some potential side effects, though. Mild stomach or gastrointestinal issues sometimes flare up when taking chlorophyll supplements. Discolored poop (most likely green) also is a possibility.

There’s also an increased risk of sunburn for those using chlorophyll drops. Going back to those middle school science lessons, it seems that chlorophyllin maintains some of chlorophyll’s ability to act as a photosensitizer.

If you really want to boost your chlorophyll intake, Czerwony says there’s a more natural way than searching out supplement bottles. Just steer your grocery cart into the produce aisle and fill it with green vegetables.

Foods rich in chlorophyll include recipe-ready produce such as spinach, kale, green beans and peas. Better yet, each of those options includes fiber, vitamins and other nutrients not packed into chlorophyll drops.

There’s another side benefit to going the grocery route, too: “A bottle of chlorophyll drops isn’t cheap,” Czerwony says. “From a health standpoint, you’d be better off spending the money on vegetables.”

4 Exciting Reasons to Rotate Your Foods

How Lavender Can Improve Your Health

The Best Teas to Drink for Your Health 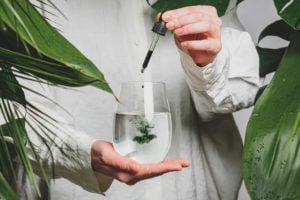 Are There Health Benefits to Using Liquid Chlorophyll?

There’s a growing buzz on social media about the potential health benefits of chlorophyll drops. Does it really work? Get your answer from a dietitian.