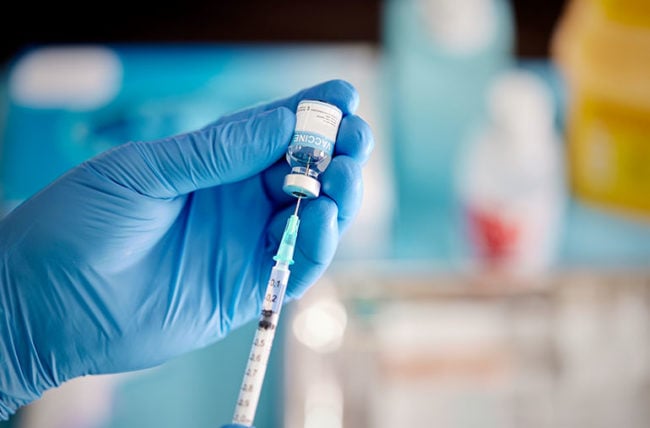 According to the most recent data from the Center for Disease Control and Prevention (CDC), there are more than 11,800 confirmed monkeypox cases in the United States and an estimated 36,500 infections globally. On July 23, 2022, the World Health Organization (WHO) declared the global spread of monkeypox a Public Health Emergency of International Concern — its highest alert level.

The good news: Monkeypox and smallpox are closely related, and smallpox vaccines provide some protection against the rapidly spreading monkeypox virus. Distribution of these vaccines is now rolling out to some people who are most at risk.

Infectious disease specialists Frank Esper, MD, and Ted M. Ross, PhD, break down what we know about the current vaccines available and how they can help protect against monkeypox.

Is there a monkeypox vaccine?

The crossover between monkeypox and smallpox means that the prevention plan for them also matches up. According to the CDC, smallpox vaccines are up to 85% effective in preventing monkeypox.

“These members of the poxvirus families are so closely related that if you get immunized against any one of them, it actually protects against all the others,” Dr. Esper explains. (If you’re wondering, chickenpox is caused by the varicella-zoster virus — despite its name, chickenpox is not a member of the pox family viruses — so, if you’ve had chickenpox or had the vaccine, you aren’t immune to monkeypox.)

Because we haven’t vaccinated people against smallpox in 50 years, nearly half of the current U.S. population doesn’t have immunity to smallpox or, by extension, monkeypox.

“Teens, 20- and 30-year-olds are probably the most susceptible population to monkeypox,” Dr. Ross says. “It’s not surprising that you’re seeing it among sexually active individuals, particularly in urban settings.”

Manufacturing of the original smallpox vaccine stopped in 1978. Following the September 11, 2001, terrorist attacks, however, the United States and other governments began creating vaccine stockpiles, including smallpox, due to bioterrorism concerns. That led to the production of two new smallpox vaccines, which are now being used to combat monkeypox.

When properly administered before exposure, both vaccines are able to protect against monkeypox, according to the CDC. Being vaccinated within four to 14 days of exposure to monkeypox may help prevent infection or reduce its severity.

The two types of vaccinia vaccines against smallpox and monkeypox today are the ACAM2000 vaccine and the JYNNEOS vaccine.

The ACAM2000 vaccine requires only one shot. “This is basically the vaccine that we’ve had for quite some time,” says Dr. Esper. “It’s injected into a person’s shoulder and it causes an infection in that shoulder. Your immune system will then eliminate it and learn how to protect against smallpox and any other pox virus that comes around, like monkeypox.”

But higher risks come with this vaccine because the virus can replicate and spread to other parts of your body. If you get the ACAM2000 vaccine, you’ll need to take precautions when caring for the vaccine site and not have close skin-to-skin contact with others. And you’re only considered fully protected 28 days after the inoculation.

The newer vaccine JYNNEOS (also known as Imvamune® or Imvanex®) was licensed by the U.S. Food and Drug Administration (FDA) in 2019 for the prevention of both smallpox and monkeypox in adults. It’s considered a safer form of vaccine if you’re immunocompromised or have any of the above conditions.

“It basically just goes into the skin and doesn’t replicate,” notes Dr. Esper. “Then, your immune system learns how to protect itself from that virus. It’s similar to a flu shot.”

This vaccine has a lower risk of side effects. It requires two shots, spaced four weeks apart. You’re considered fully immune two weeks after your second dose. There’s currently a limited supply of JYNNEOS, but more is expected in the next few months. The U.S. Department of Health and Human Services plans to distribute a total of more than 4 million JYNNEOS doses in 2022 and 2023.

Is monkeypox the same as smallpox?

You’re not seeing spots — monkeypox and smallpox are, in fact, different. But they’re actually siblings of the same family called orthopoxvirus (or poxvirus).

The big difference? Monkeypox is far less severe and is rarely ever fatal.

“Most people infected with monkeypox will have a mild disease,” Dr. Ross says. “There is probably a large pool of people who are infected and don’t realize it because they have minor symptoms and only one or two skin lesions. The disease is uncomfortable but typically does not require hospitalization.” Monkeypox can be more severe in children and people with compromised immune systems.

Like smallpox, monkeypox is a virus that spreads through close skin-to-skin contact with a person who is infected who has open sores or scabs, through oral fluids or respiratory droplets.

Smallpox is a more life-threatening disease than monkeypox, and causes pus-filled blisters to develop all over your body. The original smallpox vaccines were widely distributed in the U.S. in the 1950s, 60s and 70s. By 1972 — thanks in large part to the vaccine — smallpox was declared eradicated (wiped out) in the U.S., and vaccination efforts ended. Globally, smallpox was officially declared eradicated in December 1979.

Who can get the vaccine against monkeypox?

Currently, there are no plans for mass public vaccination in the United States. The two licensed vaccines available are only recommended to prevent monkeypox if you are:

Additionally, the Department of Health and Human Services has developed a policy regarding who’ll be eligible to receive the vaccine as more doses become available. This will be based on targeting communities with the highest case rates of monkeypox and will be recommended for those with confirmed exposure. This includes:

For most individuals, this means you won’t be able to go to your doctor’s office to get the vaccine just yet. But if you think you may have been exposed to monkeypox, contact your healthcare provider to discuss your eligibility and vaccine availability.

“If you do worry that you might have monkeypox, we now have tests that have a quick turnaround time to get those results back,” states Dr. Esper.

If I had the smallpox vaccine years ago, would I be protected?

What if you already got a smallpox vaccine years ago? You may also be wondering if a previous vaccination for smallpox could still protect you against the current outbreak of monkeypox.

The answer is that a previous vaccination against smallpox may lessen the severity of monkeypox, but there’s no guarantee.

“We don’t believe that the previous vaccine will prevent you from getting the infection,” says Dr. Esper. This is because even if you got the vaccine against smallpox before the 1970s, that protection may have waned over time.

“If you’ve had a previous vaccination against smallpox, you probably are less likely to get very, very sick,” explains Dr. Esper. “But it’s probably not enough to prevent the infection itself.”

How else can I protect myself from monkeypox?

In addition to getting vaccinated if you’re a candidate, the CDC recommends these steps to protect yourself during the monkeypox outbreak:

While we’re still learning more about the current monkeypox outbreak, past vaccines against smallpox have been found to be effective. If you believe you or a loved one may have contracted monkeypox, call your healthcare provider to find out if you’re able to get vaccinated.

Why Are Mumps Outbreaks on the Rise?

Worried About Pneumonia? Why the Vaccine Is Your Best Defense

What To Know About COVID-19 Variants

Do Smallpox Vaccines Protect Against Monkeypox?

While we’re still learning more about the current outbreak of monkeypox, existing vaccines against the closely related smallpox are effective.