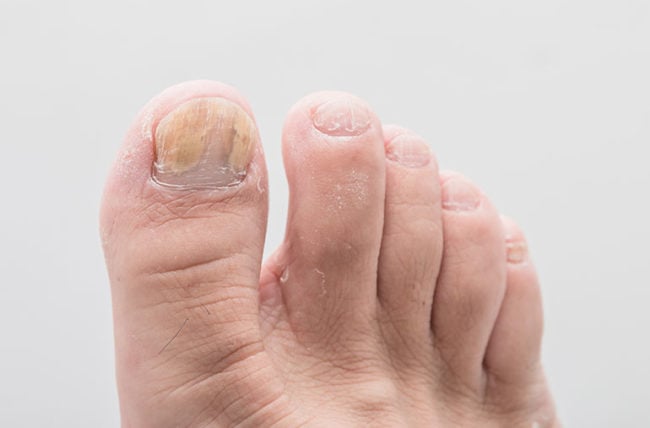 Trying to figure out whether you have nail psoriasis or nail fungus may keep you on your toes. There are a lot of similarities between the two — and you can actually have both conditions at the same time — but they’re different from each other and require different types of treatment.

Psoriasis is a skin disorder in which your immune system overreacts, causing inflammation in your skin cells and forming scaly or red patches called plaques. Sometimes, these plaques can be itchy or painful. You can also develop psoriatic arthritis, which causes joint pain and swelling. There’s no cure for psoriasis, but there are ways to alleviate many of its symptoms and provide relief.

Fungal infections are different: They’re curable infections that occur when a bunch of fungi come into contact with your skin and get in between your nail and nail bed. These infections spread quickly and can be contagious. Often, you tend to pick them up in warmer, moist climates. Walking barefoot in wet, high-traffic areas like locker rooms, beside pools or even in garden soil may lead to infection, especially if you have an open wound like a cut or small scrape.

In virtually every case of nail psoriasis, someone will show other signs of psoriasis somewhere else on their body because it’s a full-body inflammatory disease. “About 5% of people have nail psoriasis alone, meaning they don’t have psoriatic arthritis or skin psoriasis,” says dermatologist Jonathan Braue, MD. “If you see somebody with pretty typical plaque psoriasis, or they have a history of plaque psoriasis, and most of the nail changes they’re having are on the fingernails, then it’s a slam dunk.”

When you have psoriasis, sometimes the top of your nail tends to break down, causing pits, or small divots, to appear along the surface of your nail. “It literally looks like you took a little tack and nailed it down into your nail,” says Dr. Braue. “It’s not a deep pit. It doesn’t go through the entire nail. It just looks like these small little depressions.”

With psoriasis and fungus, sometimes your nail will become detached from your skin and lift on its own, creating a gap underneath your nail. This process is typically painless. “But in psoriasis, you tend to get almost like a lipstick line around that area of white where the plate has lifted,” says Dr. Braue.

Other times, you’ll find red or dark brown splotches on the nail itself. This is often caused by the infiltration of white blood cells in an area that’s been inflamed. “If you see what’s often called an oil spot, that does not happen in toenail fungus,” says Dr. Braue.

While psoriasis is more commonly found on fingers, fungal infections typically occur on your toenails, and most often on a single toe unless it’s left untreated and spreads. “If you see a single toenail involved, it’s much more likely it’s a fungal infection or trauma-related, not psoriasis,” says Dr. Braue. “Fungus will affect your nails differently based on the part of the nail that’s infected.”

This highly contagious fungal infection is a form of ringworm that causes an itchy, stinging or burning rash on your skin. Sometimes, the skin under your nails can become cracked, causing open wounds that may then become further infected, causing toenail fungus. “If you see someone who just has rip-roaring athlete’s foot and they have toenail changes, it’s probably a fungus,” says Dr. Braue.

As with psoriasis, nails affected by fungus can become detached, causing severe discoloration in the nail. Often, you may find yellow or white streaks along the entirety of the nail that’s become detached, or in small lines. “Because the plate is lifted, it’s not uncommon to get some secondary bacterial infections in there as well,” says Dr. Braue.

Sometimes, your nail and the skin underneath it will thicken as a result of a fungal infection. This nail growth is not normal and will often be brittle and crack. “You can get pain associated with it especially if it thickens so much,” says Dr. Braue. “It can be painful in certain shoes. It can be painful to trim.”

Since the root causes of nail psoriasis and nail fungus are different, the ways they’re both treated are also different.

If you’re noticing signs of nail psoriasis or nail fungus, you should see your healthcare provider, who can accurately diagnose exactly what it is you’re dealing with. They’ll then prescribe ointments or medication — and in some cases, a combination of both. Treatments may last anywhere from a couple of months to a full year, as you need to give your body time to rid itself of the infection (in the case of fungus) or to regrow healthy nails. As a healthy nail grows over time, it’s important to trim the unhealthy or infected part of the nail off. If you’re experiencing pain, consider wearing more comfortable, loose-fitting shoes until you’re fully healed.

Occasionally, you can get steroid injections — though, these tend to hurt when given in such a sensitive spot like your feet — to speed up the process, or you may be able to seek out cosmetic options such as laser or surgical removal.

“Most people are going to improve within six weeks or so with skin psoriasis, but it may take several months to notice improvements with purely nail psoriasis,” says Dr. Braue. “It takes 12 to 18 months to regrow a toenail. If you remove the toenail completely, you’re going to be waiting a year, year-and-a-half.”

How Does Psoriatic Arthritis Affect Your Nails?

Where Can You Get a Yeast Infection on Your Body?

How You Can Stop Foot and Toenail Fungus In Its Tracks

How to Prevent and Treat Ingrown Toenails

How You Can Avoid an Infection From a Salon Pedicure

What Causes Brittle Nails and How To Treat Them 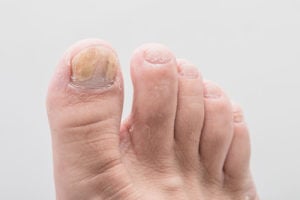 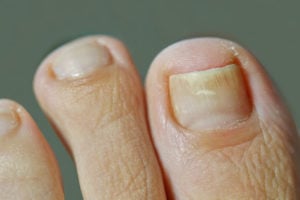 The Difference Between Nail Psoriasis and Nail Fungus

Nail psoriasis and nail fungus have a lot of similarities, but one is a result of an infection and the other is inflammatory. Here’s how you can treat both.