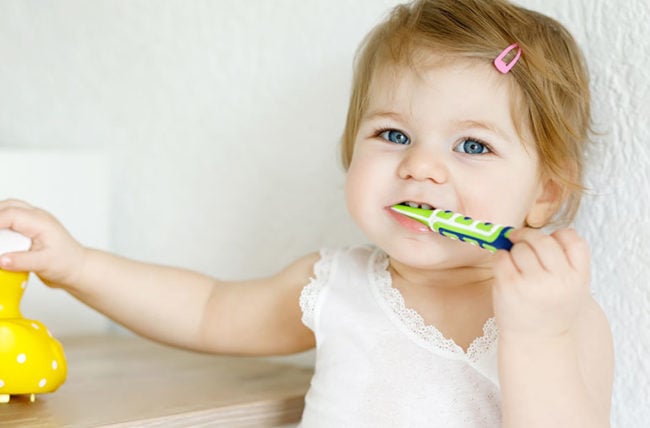 Brushing at least twice a day, every day, is what is recommended to keep teeth healthy and cavity-free. But, according to a recent report, from the Centers for Disease Control and Prevention, 80% of U.S. children start brushing later than they should.

“What the study found is while the recommendation is for kids to start brushing as soon as they have their first tooth, there were a significant percentage of kids who started brushing much later than that ― some as late as 2 and 3 years old or older,” says pediatrician Kimberly Giuliano, MD, who did not take part in the study.

Why it’s a bigger deal than you might think

If children start brushing too late, they’ll start to develop plaque and tartar buildup on their teeth, which can lead to cavities, Dr. Giuliano explains. And cavities in young teeth can be equally as damaging as they are in adult teeth.

And it’s not just those baby teeth that are at stake. Dr. Giuliano says inadequate brushing can also cause bacteria to develop in the body, which can lead to inflammation and disease ― not just in the mouth, but throughout the child’s entire body.

So when’s the right time to start?

It’s important for parents to get children excited about brushing their teeth at a young age, Dr. Giuliano says. Then once they are old enough, allow them to start learning to brush their own teeth with supervision.

Start brushing as soon as your child has a tooth. Develop the habit early, and the child will want to do it. They will have less fear of doing it, and have less resistance around that task we’re asking them to do at least twice a day, every single day.

And don’t use too much toothpaste!

The study also found many children are using too much toothpaste. Because children sometimes swallow their toothpaste, ingesting too much can lead to a condition called fluorosis.

Fluorosis causes deposits in the developing teeth, leading to pits and discoloration ― and those stains are permanent.

For this reason, fluorinated toothpaste isn’t recommended for children under the age of 2.

“Once children are at the age of 2, we recommend that they use the amount of toothpaste that’s the size of a grain of rice,” Dr. Giuliano says. “Between the ages of 3 and 6, they can just do a pea-sized amount of fluorinated toothpaste on the toothbrush.”

Using the appropriate amount of toothpaste with each brushing will keep kids safe, even if they accidentally swallow some, she says.

Safest Ways to Brush and Use Fluoride For Babies and Children

Oral Care for Babies: How to Keep the Tiniest Teeth Healthy

Is It Safe to Go to the Dentist While Pregnant?

How Your Oral Health Affects Your Overall Health 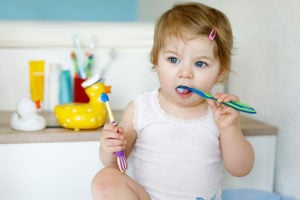 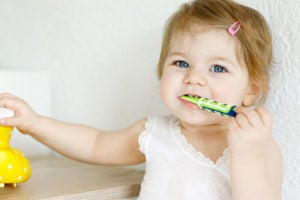 Parents: You May Not Start Brushing Your Child’s Teeth As Soon As You Should ― and Yes, It’s a Big Problem!

It’s not just those baby teeth that are at stake! Here’s why parents need to start brushing their kids’ teeth as soon as they come in.