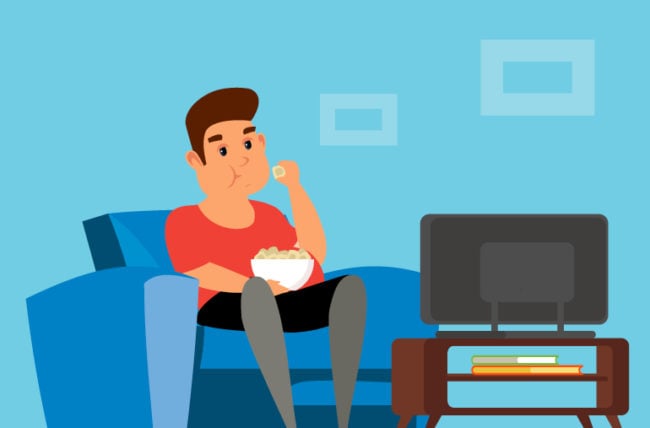 Do you ever eat dinner with a fork in one hand and the TV remote in the other?

For many people, the preferred way to unwind after a long day is by plopping down on the couch, kicking up their feet and vegging out in front of the TV.

Unfortunately, this habit has the potential to lead to overeating and, eventually, weight gain.

“It’s fine to sometimes have a snack in front of the TV, but when it becomes a repeated pattern, or when eating and watching TV become cognitively linked, then it becomes an unhealthy pattern,” explains psychologist Susan Albers, PsyD.

If you’re eating in front of the TV (or computer, or smartphone, for that matter), chances are you’re paying more attention to what’s happening on the screen than to the spaghetti you’re putting into your mouth.

“We tend to eat more mindlessly in front of the TV,” Dr. Albers explains. “We also don’t taste and experience the food as much because we’re distracted.”

This not only makes food less satisfying, but it makes it easier to miss cues that you’ve eaten enough, like seeing how much is gone from the plate or feeling that your stomach is getting full.

Research backs up this idea, too. Studies show that we tend to eat more when we’re distracted — both in the moment of distraction and later on in the day.

“I think eating while watching TV also prolongs the time period that we’re eating,” Dr. Albers adds. “If your show is an hour long, you might continue to eat throughout that time period.”

If you’re ready to start eating more mindfully, start with these tips from Dr. Albers:

Sleep, stress and a whole variety of emotions can also contribute to overeating, so if you’re having a hard time reigning in your TV-snacking, consider whether there might be other factors at play.

How to Choose Healthy Snacks (That Won’t Derail Your Otherwise Healthy Diet!)

Are You a Fast Eater? Slow Down to Eat (and Weigh) Less

Tips for Eating Healthy During the Holidays

Why Do You Crave Salt? 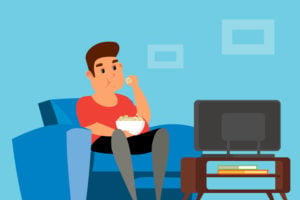 Do you ever eat dinner with a fork in one hand and the TV remote in the other? A psychologist explains how this habit could lead to overeating and, eventually, weight gain.