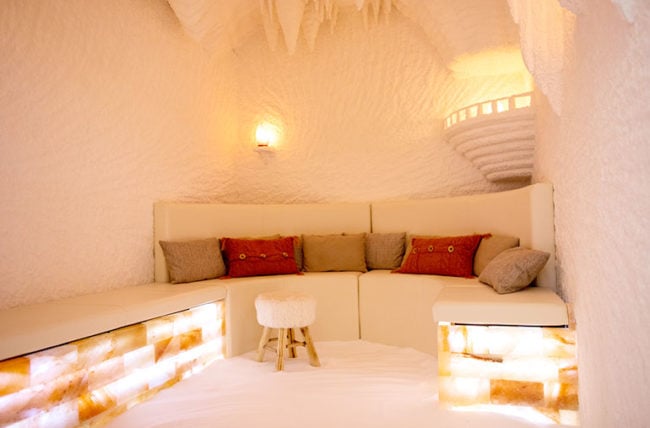 Nearly two centuries ago in Poland, a physician noticed something rather interesting about those who were toiling deep in the Wieliczka Salt Mine: They didn’t have lung issues like workers in other mines.

Today’s therapeutic salt rooms owe a debt of gratitude to that long-ago observation by Dr. Feliks Boczkowski. His belief in the healing power of salt is the foundation for the growing wellness trend of halotherapy (salt therapy).

Here’s the question, though: Do these newfangled “salt caves” deliver on touted health claims of better breathing, healthier skin and even stress relief?

What is a salt room?

Salt rooms deliver a dry salt therapy experience, where the air inside the room exposes you to microscopic salt particles. There are two types of therapy rooms, according to the Salt Therapy Association:

“For what would be considered a true halotherapy experience, you need a room with the particle generator,” says Dr. Young.

When it comes to proven research, though … well, let’s just say there’s not a salt mountain of scientific evidence to support the claims.

“Sometimes, it can be frustrating that there aren’t enough well-designed studies looking at a particular treatment or the different study outcomes can be conflicting,” notes Dr. Young. “But that doesn’t mean there isn’t a potential benefit to that treatment.”

Here’s why people say they go to salt rooms.

If you have trouble moving air in and out of your lungs, odds are, your condition is on someone’s list of health issues that can be made better through halotherapy. Various sites claim salt rooms can help address:

So, how does this salty air make a difference? “Breathing in the salt particles appears to thin mucus, which allows your cough to be more productive and makes it easier to get phlegm out,” explains Dr. Young. “It gets things moving. That’s often key for people with breathing issues.”

But there’s just not a lot of rigorous research supporting the theory. “The data is mixed on halotherapy,” says Dr. Young.

The idea of using salt to clear the gunk out of your sinuses isn’t exactly groundbreaking. Saline sprays and rinses are go-to methods to rinse out your nose and sinuses for better breathing.

But does breathing in dry salt accomplish the same thing? Again, there’s not enough research to verify the claim, says Dr. Young.

Allowing salt-saturated air to flow over your body is said to naturally boost your skin’s hydration, leaving it feeling smoother and looking less splotchy. There’s a lot of chatter about balancing out pH levels and clearing up eczema, too.

Is it true? You can probably guess the answer. “We don’t have scientific proof,” says Dr. Young.

(Looking for a natural route toward younger-looking skin? Try eating these foods.)

A calm and dimly lit salt-filled room with soft music playing certainly presents itself as a setting ideal for meditation. “It’s an environment where you could definitely calm your nervous system and reduce stress.

But the same could be said if you took out the salt component. “You could get the same effect without it,” says Dr. Young. (Learn more about ways to practice mindfulness.)

Are there risks to visiting a salt room?

If you’re relatively healthy, spending a session in a salt room shouldn’t cause any issues, assures Dr. Young. However, she offers a few notes of caution.

Is a salt room worth trying?

Could a salt room be beneficial for you? “Maybe,” says Dr. Young. “It’s something that may be worth trying, especially if you have some breathing issues. But view it as an extra to your normal treatments ― not a replacement.”

How to Keep Your Hands Looking Young

Diabetic Foot Ulcers: Why You Should Never Ignore Them

Could You Benefit From Sensory Deprivation Tank Therapy?

Can’t Stop Picking Your Skin? How to Break the Cycle 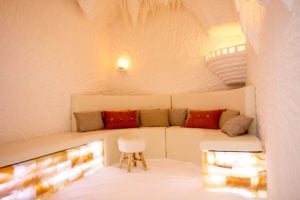 Salt rooms are billed as a way to solve breathing problems, improve your skin and reduce stress. Find out if the claims are true.