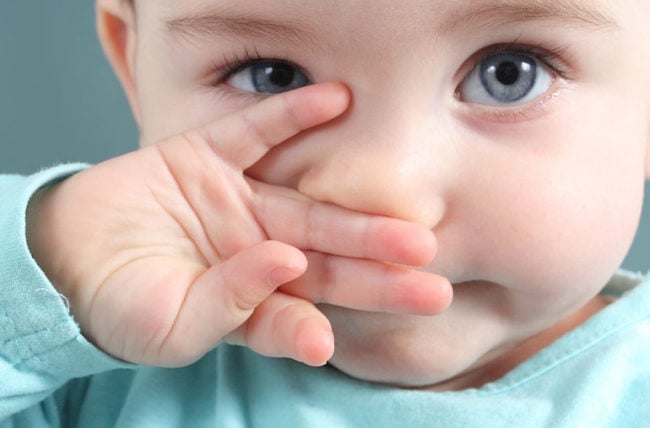 There goes your little one again, darting across the room to grab something they spotted on the floor. Inquisitive and fearless, children love to experiment. If they find a coin on the floor, it’s just as likely to go in their nose as in their piggy bank.

Foreign bodies stuck in the nose are a common occurrence in children ages 2 to 5 — and sometimes even for children as old as 7 or 8.

“Kids are more likely to put small things like beads or popcorn kernels in their noses, but I see a whole variety of things, too,” says pediatric emergency medicine specialist Purva Grover, MD.

Dr. Grover provides some insight on what you need to know if your child lodges something in their little nostril.

What are the signs of trouble?

Parents typically know when their child has put something in their nose. You’ll often see them contemplating the act from across the room, and as soon as you get to your little one, the object gets crammed into their nose.

“This happens more often with older children who don’t want to get in trouble or those with developmental delays who can’t tell a parent what happened,” says Dr. Grover.

If you don’t see your child put anything in their nose, but you think there might be a problem, watch for these signs:

If there is something stuck in your child’s nostril, it’s important to act quickly — either try to remove it or take your child to the doctor right away.

“If you wait, an infection can develop,” she warns. “In rare cases, especially if it’s left in the nose overnight, the object can get sucked into the airway and possibly cause choking.”

Try a ‘mother’s kiss’ for removal

Most foreign objects in the nose won’t come out unless a parent or doctor removes them — especially for small children, who aren’t very good at blowing their noses.

There are two important things to remember if this happens to your child:

Make only one attempt to remove the object on your own, unless you believe the situation is life-threatening. The more times you try, the less cooperative your child will be when the doctor tries to remove it. This increases the likelihood of needing an operation to remove the object.

If you do try to handle the situation at home, use the “mother’s kiss” method, which works best for small, hard objects like beads. Follow these steps for the kiss method:

You can use this process to remove hard objects without a doctor’s help. One study found that a mother’s kiss was a safe and effective technique for removing foreign objects from the nose and in some cases, it can prevent the need for general anesthesia.

Using this gentle pressure to force the object out is successful about 60% of the time, but a doctor typically will need to remove softer objects made of foam or tissue.

Lastly, look for other objects

“Putting foreign objects in the nose is a habitual thing,” says Dr. Grover. “This means that if your child has put something in their nose, then they’re likely to have also tried putting something somewhere else, like maybe in an ear, too.”

So if you find one stuck object, don’t forget to look for more. While it’s almost impossible to keep every small item away from your child’s little hands, knowing how to proceed in case something does get lodged in their nose can save you some worry.

Can Putting Garlic in Your Nose Relieve Congestion?

Feminine Odor Problems? What Every Woman Needs to Know

The 4 Head Lice Facts That Every Parent Needs to Know

Removing Tonsils and Adenoids: Right for Your Child? 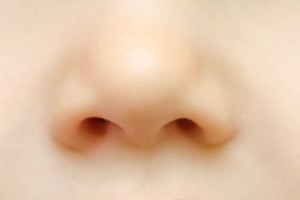 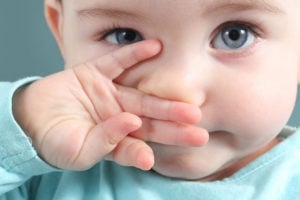 Is Something Stuck in Your Child’s Nose? Try a ‘Mother’s Kiss’

Young children love to experiment, and that’s why it’s common for small objects to get stuck in their noses. Find out how to handle the situation.