Winnie the Pooh might have been on to something. While honey is known as a natural way to sweeten foods, it may have benefits for your body, too, says registered dietitian Mira Ilic, MS, RDN, LD.

How honey is made

Honey is a liquid sweetener that bees make. After they collect nectar from flowers, they take it back to the hive and regurgitate it. Then, the other bees chew it until it becomes honey. The bees deposit the honey into tiny, waxy storage units called honeycombs. They fan it with their wings to dry it out. This process makes it stickier.

“Honey gets its sweetness from its chemical makeup,” Ilic says. “It’s made up of two simple sugars called glucose and fructose, along with some minerals.”

The U.S. boasts more than 300 different types of honey. You can buy it:

Why is some honey light and others dark?

Whether honey is light or dark in color depends on which kind of plant the bees who made it took the nectar from. “For instance, dark buckwheat yields dark honey,” says Ilic. “But nutritionally, there’s evidence that darker honey has less water and more antioxidants than light-colored honey.”

Honey has so many different tastes you can enjoy compared to plain sugar, she adds. “It can be sweeter or more bitter, depending on the flower source.”

Light-colored honey tends to be mild in flavor. Varieties include:

Dark honeys are known for their stronger flavors. Examples include:

Store honey in a cool location away from sunlight. But sometimes, even in the perfect spot, honey can crystallize and solidify. “Honey with a higher ratio of glucose versus fructose crystallizes sooner,” Ilic explains. “Glucose may also attach to the little particles of honeycomb and pollen in raw honey and is more likely to crystallize as a result.”

But crystallized honey is still safe to eat: Ilic recommends using it as a spread, like butter. You can also re-liquefy it by putting the container in a warm water bath.

“Many other claims have been made about the health benefits of honey – some based on very small studies, others overstated and based on mixed study results,” Ilic says. “Additional studies are needed.”

How to add honey to your diet

While honey has health qualities that other sugars only dream of, Ilic says it’s still an added sugar — and eating too much of it can wreak havoc on your health. The American Heart Association recommends:

Those limits include all sources of added sugar in your diet, so use honey in moderation to avoid exceeding the limits, says Ilic. “Try sweetening plain yogurt with a light drizzle of honey and add your own fruit, instead of eating flavored yogurt with too much added sugar.” You could also use honey in sauces and marinades or as a skin mask.

If you want to use honey medicinally, Ilic says talk with your health care professional first.

How to choose honey

Ilic’s first tip? The best honey doesn’t come in a cute little plastic teddy bear. That kind of honey is processed and less beneficial than its counterparts.

“The clearer the honey, the more processed it is. Raw honey seems to be the better choice,” she says.” It’s likely to have some pollen and more enzymes because it’s not treated with heat. Pollen may have beneficial properties. But pollen does make honey look foggier.”

If you’re buying honey from a local source, she also recommends asking:

Ilic adds that an “organic” label doesn’t automatically mean the honey is healthier or better quality. “Bees sometimes fly a few miles past their pesticide- and herbicide-free property to ones with flowers that aren’t. And even organic honey may be ultra-pasteurized.”

How To Make Chia Pudding

How to Choose the Best Health Bars 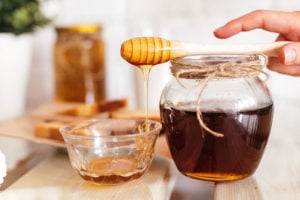 The Benefits of Honey + How to Incorporate It Into Your Diet

A registered dietitian explains the benefits of honey and what you need to know about different types of honey, including Manuka honey.