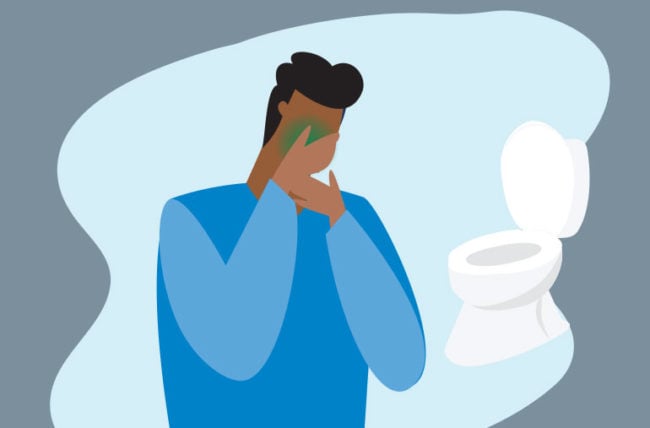 It’s that feeling you wish you’d never had. You’re suddenly queasy. Your digestive system shifts violently into reverse. And that meal you just ate comes back to see the light of day.

Vomiting is definitely not fun. But it has a purpose.

“Vomiting is a reflex that allows the body to rid itself of ingested toxins and poisons,” says family medicine physician Matthew Goldman, MD.

After you vomit, it’s important to wait a few hours before eating or drinking like normal. Start by sipping small amounts of water and sucking on ice chips for about three to four hours. Then, you can consume clear liquids like water, diluted juices, ginger ale, clear broth and popsicles for another three to four hours.

Dr. Goldman shares some common causes of vomiting and how to recover.

Although it’s your belly in distress, “it is changes in your immune and/or nervous system that trigger the vomiting reflex,” explains Dr. Goldman.

Neurochemicals can travel different pathways to activate receptors that start the vomiting process.

A trigger zone in your brain may pick up immune changes or sense the presence of drugs or toxins. Or the medulla (part of your brainstem) may gather relevant information from different parts of your body. Or your vagus nerve, which runs from your brainstem to your GI tract, may signal that something is abnormal in your gut.

But the end result is always the same: Your last meal rockets up — and out.

Common causes of vomiting in adults include:

What to do after throwing up

After throwing up, you’ll want to give your stomach time to recover. Here’s what to do.

Make hydration your main focus after a bout of vomiting, states Dr. Goldman.

Start by drinking small sips of water every 15 minutes for the first three to four hours. You can even suck on ice chips.

After that, you can drink clear fluids like water, diluted juices and ginger ale. And eat foods that are mostly liquid, like Jell-O®, clear broth and popsicles.

Ease yourself back into your regular diet with small amounts of bland foods like plain yogurt, plain oatmeal, grits, bread and crackers.

“Bland foods tend to be best because they require less digestion and, therefore, less demand and irritation on the lining of the stomach and intestines,” notes Dr. Goldman.

You’ll want to avoid fatty foods. They digest more slowly and can cause nausea. Steer clear of sugar and sugary or caffeinated drinks, which can cause dehydration.

“Some foods can irritate the lining of the stomach, as well as lead to an increased amount of urination, which can lead to dehydration,” says Dr. Goldman.

It’s also helpful to avoid strong smells, which may trigger your gag reflex.

“Strong odors may not agree with someone who is already feeling nauseous and this could trigger gagging, dry heaving and even vomiting,” says Dr. Goldman.

When you’re feeling well enough to eat, start off by consuming smaller meals, more frequently. And try to eat slowly.

“Similar to eating bland foods, less digestion equals less irritation and demand on the GI tract, which might already be inflamed or need rest while recovering,” says Dr. Goldman.

Should you throw up?

Many of us will try to prevent vomiting if we’re feeling nauseated. But if you’re feeling ill, it’s best to let yourself vomit naturally. But don’t force it, says Dr. Goldman.

Implementing a few good habits can help you steer clear of vomiting in many cases.

Your best defense against stomach viruses and bacteria is to wash your hands regularly. Use soap and warm water for at least 30 seconds. Scrub your fingernails, and in between your fingers as well.

If you get motion sickness or seasickness, take medication to stop nausea before it starts. If you feel a migraine coming on, take your headache medication at the earliest warning sign.

Finally, tell your doctor when pain is intolerable. They can help you find ways to minimize it. And if your medication is making you queasy, ask your doctor about alternative options.

When to see a doctor

Sometimes, an upset stomach is harmless. Having one episode of vomiting isn’t usually concerning, Dr. Goldman assures. You throw up and then immediately feel better.

“If you’re still vomiting after two days — especially if you have significant chest or belly pain — you should see your doctor,” he says.

“Vomiting can make people severely dehydrated, which can lead to serious complications,” cautions Dr. Goldman. “Our bodies depend on good circulation to carry oxygen and nutrients around. If there’s not enough fluid, circulation doesn’t happen. And that can be life-threatening.”

That doesn’t mean you should run to the doctor every time you vomit. But when vomiting is frequent or prolonged, you’ll need to know what’s causing it so you can feel better.

“If you can’t keep anything down, come in and get IV fluids and medication,” he says. “You might even need to have some imaging done to help pinpoint the problem.”

The Best Foods to Eat When You’re Sick

Throwing up isn’t fun. But vomiting serves a useful purpose in ridding your body of toxins and poisons. Our expert offers tips for post-throw up recovery.