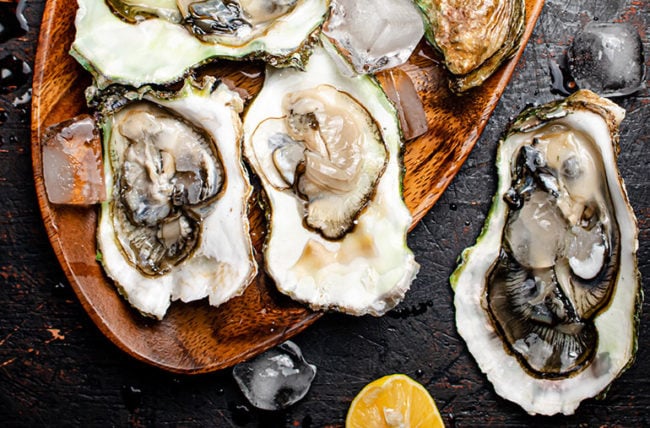 Can spicing things up in the kitchen help you do the same in the bedroom? Foods like oysters and dark chocolate have long been touted as natural aphrodisiacs, with the ability to pep up your sex drive. But do they work?

Yes and no. Research shows that for the most part, the power of aphrodisiacs is all in our head — but the placebo effect can go a long way. Registered dietitian Julia Zumpano, RD, explains what aphrodisiacs are, whether they work and which to try.

What is an aphrodisiac?

“Aphrodisiacs — foods thought to have an impact on your sex drive — have historically been divided into three categories,” Zumpano explains. Foods that increase:

Around the world, a great many foods are thought to fall into the aphrodisiac category — and there are almost as many reasons why. Some foods have nutrients, vitamins and minerals thought to have a direct impact on your sex drive, while others simply have attributes associated with increased arousal:

Common natural aphrodisiacs (or not)

“Some foods have been clinically shown to have an impact on erectile dysfunction, which explains their designation as aphrodisiacs, while others in the category aren’t associated with any proven benefits,” Zumpano says.

She walks you through the reality of whether these foods can rev you up.

“Some people believe that capsaicin, the compound that gives peppers their kick, can also kick your libido into high gear,” Zumpano says, “but no research has shown this to be true.”

Cacao has long been thought to increase sexual desire, which may explain why it’s such a popular Valentine’s Day gift. It includes a compound called phenylethylamine, a mild stimulant that can positively impact your mood. But research shows that women who eat chocolate may actually be less interested in sex than women who don’t.

This soft, delicate fruit was a popular aphrodisiac in ancient Greek and is associated with fertility because of its many seeds. But there’s no research showing that it can increase libido.

The ancient Greek physician Hippocrates is said to have prescribed honey to patients who needed a little help with arousal, but today, there’s no scientific evidence showing that it works.

Does the word “aphrodisiac” make you think of chocolate-covered strawberries? The little red fruits have become a symbol of sexy foods. “But they don’t have any special sexual powers,” Zumpano says.

Popular in Peru, this South American root vegetable is thought to boost libido. A few studies show that it may indeed boost erectile function and sexual desire, but there’s not yet enough research to be sure.

Oysters, thought to resemble the female anatomy, have been considered an aphrodisiac since the days of the Roman Empire. We hate to break it to Casanova, but there’s no scientific evidence to show that they actually have an impact on sex drive.

One study showed that men with erectile dysfunction who ate 100 grams of pistachios for three weeks saw an increase in their overall erectile function. “This may be because pistachios contain arginine; though, to help relax blood vessels,” Zumpano says.

This sweet, earthy spice has been shown to improve sexual dysfunction in people with depression treated with fluoxetine. In one study, saffron was shown to help with erectile dysfunction and lead to more satisfying sex; another study found that saffron may improve arousal, lubrication and pain in women. There are no studies, though, showing saffron’s benefits in people without depression.

Summer’s favorite fruit is rich in citrulline, an amino acid known to relax and dilate your blood vessels in much the same way as erectile dysfunction drugs do.

That said, you couldn’t possibly consume enough watermelon to make it worthwhile. “The rind is the part most packed with citrulline — and the least likely to be consumed,” Zumpano says.

Is it the placebo effect?

Here’s the thing: “Just because a food doesn’t have scientific properties declaring it helpful for your libido doesn’t mean that it’s not still doing a little something for your libido,” Zumpano says.

The placebo effect is when a substance with no medical effects has a positive benefit on a person’s health simply because the person believes it will. So, when it comes to aphrodisiacs, if you find a certain food sexy — be it chocolate, oysters or something else entirely — it can’t hurt to indulge a little.

“But stay away from supplements claiming to serve as aphrodisiacs, which aren’t approved by the FDA and may negatively interact with other medications,” Zumpano warns.

What to try instead of aphrodisiacs

If you’re interested in aphrodisiacs because you’re experiencing a low sex drive or sexual dysfunction, you’re much better off turning to medical professionals than to chocolate bars.

See a doctor if you’re experiencing erectile dysfunction, low libido, vaginal dryness or other issues that might get in the way of your ability to get it on. Depending on the cause, your doctor may prescribe medication, therapy or other treatment strategies.

What Are Hormones and What Do They Do?

Erectile Dysfunction Got You Down? Don’t Skip the Visit With Your Doctor

Does Low Testosterone Cause Erectile Dysfunction?

The Link Between Diabetes and Sexual Dysfunction

Ladies: If You Have HSDD, the Little Pink Pill Might Be For You 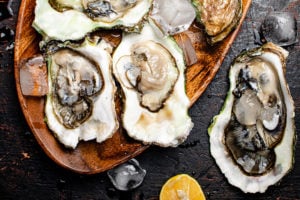 Can spicing things up in the kitchen help you do the same in the bedroom? Foods like oysters and dark chocolate have long been touted as natural aphrodisiacs, with the ability to pep up your sex drive. Here’s whether or not they work.