For many kombucha newbies, whether they’ll become an aficionado or never swallow another mouthful is decided in mere seconds. Some violently recoil as if they’ve gulped straight white wine vinegar. Others sip and profess it’s a bliss-inducing elixir.

“Some of kombucha’s health benefits are similar to those of other fermented foods, like yogurt, kefir and raw (live) fermented pickles or sauerkraut,” Smith says. “But it also has others — specific bioactive compounds — that are unique to kombucha.”

Much of kombucha’s gut-friendly accolades are likely due to the tea itself, and the polyphenols it contains.

“Polyphenols are known to act as strong antioxidants in the body and decrease inflammation, which is the root cause of many diseases and conditions,” she explains. “And the fermentation process actually increases the amount of polyphenols.”

Kombucha also provides B vitamins, a handful of essential minerals, organic acids (Think: like when vinegar ferments) such as acetic, glucuronic and D-Saccharic acids. These acids, Smith says, have been shown to be antimicrobial, so they fight against bacterial growth. They can also promote detoxification by helping the liver get rid of undesired compounds that it has to process. Last, these acids help transport polyphenols in the body.

Since some of those acids are produced from ethanol, Smith adds, it’s worth noting that kombucha contains low levels of alcohol, usually ranging from 0.5 percent upwards to 3 percent. (To put that in perspective, your average craft beer clocks in at just under 6 percent.)

But just how beneficial is kombucha? “There aren’t a lot of good quality, robust studies to support a lot of kombucha’s hype, but the compounds it contains have been associated in some studies with lowering cholesterol, lowering blood sugar, antimicrobial action, decreased rates of cancer, and improvement of liver and GI function.

So just how much kombucha should you drink?

Too much of anything is bad for you, of course. The Centers for Disease Control recommends that four ounces of kombucha can be safely consumed one to three times a day.

“That means you shouldn’t consume more than 12 ounces of kombucha a day,” says Smith, who points out that the average bottle of commercially prepared kombucha exceeds a daily, single serving at 16 ounces.

“We just don’t have a lot of research identifying optimal quantities, or even benefits and risks of many probiotic foods,” she notes.

Drinking too much kombucha could potentially lead to reactions like headache, nausea, GI distress or going into ketoacidosis (a medical emergency where there’s too much acid in your blood), Smith continues.

“Lead toxicity is also possible if homemade kombuchas are fermented in clay vessels or other containers that leach lead into the finished beverage,” she says.

Those who should skip the kombucha altogether? We do know pregnant women and young children should find another drink of choice. So should those with certain chronic diseases (particularly liver or kidney disease or HIV), compromised immune systems and alcohol dependency, she adds.

Another caveat? “Know that an allergic reaction is possible, as people can be allergic to just about anything,” Smith cautions.

And then there’s the whole question of proper sanitation. Tainted batches can become contaminated with undesirable fungi and an overproduction of yeast, she says. As when consuming any ferments, it’s wise to stick to a reputable source.

If the color or smell is off (if it smells like nail polish from an acid overproduction that’s resulted in acetone), Smith cautions not to imbibe.

“Most of the commercially packaged kombucha at the store is perfectly fine,” she reassures. “But if you’re at some random flea market and there’s a kombucha table, it might not necessarily be the best place to get it.”

What about if you’re a DIY-er? “If you brew your own using a SCOBY, you’ll also be OK as long as you have experience making fermented foods and you have a very clean, sterile environment,” Smith concludes.

The Best Teas to Drink for Your Health

5 Reasons to Add More Fermented Foods to Your Diet 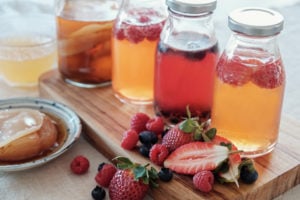 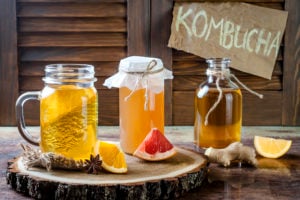 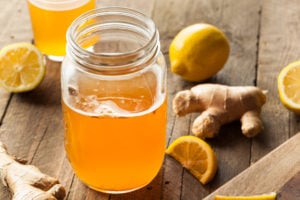 Is kombucha actually healthy for you? Dietitian Maxine Smith, RD, LD, explains why you just might want to pick up a bottle (and who shouldn’t!)