When was the last time you put a tampon in? Oh, shoot. Is that tampon still in? Now what?!

Whether you lost track of time or simply forgot you were on your period, it’s probably happened to you at some point: You’ve left your tampon in too long, and now alarm bells are going off in your head.

You’ve probably heard that wearing a tampon for too long can result in toxic shock syndrome. But what does that mean, and are there any other risks? Women’s health specialist Sara Youngblood, CNP, explains why it’s important to change your tampon regularly and what can happen if you don’t.

How long should you leave a tampon in?

The instructions on your tampon box are clear: You should never keep the same tampon in for longer than eight hours. If you leave it in longer than that, you risk toxic shock syndrome and other health concerns.

If you really want to be on the safe side, though, you may want to change your tampon even more often.

“We typically recommend that you change your tampon every four to six hours, though many people will change them more frequently if they’re experiencing a heavy flow,” Youngblood says. “Definitely do not leave the same tampon in for longer than eight hours, which is when your risk goes up.”

Let’s repeat that last part for emphasis: This only applies to the same tampon. Every time you put in a new one, the clock restarts, and you have a new four- to eight-hour timeframe. As long as you change your tampon regularly throughout the day, it’s safe to wear them throughout the duration of your period.

Dangers of leaving a tampon in too long

When you leave a tampon inside of your vagina for longer than it’s meant to be there, you open yourself up to the risk of bacteria growth. Now, bacteria isn’t always a bad thing. Your vagina is already full of healthy bacteria that’s supposed to be there and that contributes to its health.

“The vagina can be a breeding ground for bacteria because it’s dark, warm and moist,” Youngblood explains. “Those are bacteria’s favorite things.” When you leave a tampon in too long, you give bacteria a new place to grow. This can invite in bad bacteria and allow good bacteria to overgrow.

Be on the lookout for symptoms that can signify health concerns, like:

Youngblood explains some of the issues that can arise when you leave a tampon in too long.

If you’ve ever even considered using tampons, you’re probably familiar with toxic shock syndrome, commonly known as TSS. It’s caused by strains of bacteria that produce toxins — and these strains can grow on tampons that aren’t changed often enough.

“Toxic shock syndrome is very well discussed in sexual education, which has led to a basic widespread understanding of not leaving a tampon in for too long,” Youngblood says.

Fortunately, TSS is very rare, affecting 1 to 3 people out of every 100,000 people who menstruate. But it primarily affects people ages 15 to 25 who use tampons and leave them in too long. And because it’s a life-threatening medical emergency, it’s critical to know the signs, which usually come on suddenly:

“If you start to experience these symptoms, it’s critical that you get to an emergency room,” Youngblood warns.

One thing that can cause that bacteria to overgrow is — you guessed it — leaving a tampon in too long. Luckily, though, bacterial vaginosis is easily treatable with medication from your doctor.

Bacterial vaginosis doesn’t always cause symptoms, but if you start to notice off-white, grey or greenish vaginal discharge, or if you smell a sort of fishy odor that’s stronger after sex and during your period, then it’s time to talk to your healthcare provider.

“If you have allergies or sensitivities to fragrances, leaving a scented tampon in too long could lead to vulvitis, an inflammation of the vulva,” Youngblood says. Your vulva is the outer part of your genitals, which includes your labia (inner and outer folds) and mons pubis (where your pubic hair is).

Vulvitis (sometimes known as vulvovaginitis) can be caused by infections, like bacterial vaginitis, and by irritants, including the ones in scented tampons. It can cause itchiness, redness, swelling and even blisters on your vulva. Just another reason to change your tampon on the regular (and to stay away from scented period products)!

How to prevent tampon troubles

You may already be accustomed to changing your tampon within four to eight hours, especially if you have a heavy flow and don’t want to bleed through. “For hygiene purposes, most people typically already change their tampons pretty frequently,” Youngblood says.

It’s also safe to sleep in a tampon, so long as you’re sleeping for eight hours or less and follow the same safety tips. “Put in a new tampon just before you get into bed, and change it first thing in the morning to prevent health risks,” Youngblood recommends. If you’ll be asleep for more than eight hours, stick to a pad or a menstrual cup instead.

And you can lessen the likelihood of leaving a tampon in too long by planning ahead and making tampons easily available no matter where you go. Stash spare tampons in your purse or backpack, and keep extras in your car and at the office. This way, whenever the time comes to swap in a new one, you’ll be ready.

Is It Safe to Sleep With a Tampon In?

The Right Way To Insert a Tampon

Can a Tampon Get Stuck? Here’s How To Remove It

All of Your Tampon Questions Answered 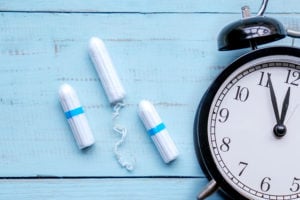 What Happens if You Leave a Tampon in Too Long?

A women’s health specialist explains why it’s important to change your tampon regularly and what can happen if you don’t.