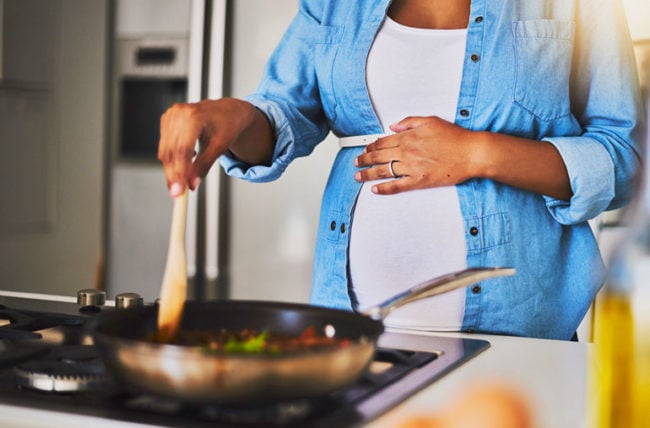 When you’re pregnant, chances are, you’ll want to change up your diet to provide the kind of nutrients and nourishment needed to keep you and your growing fetus healthy.

A healthy pregnancy diet should include nutrient-dense food, including lean meats and lots of fruits and veggies. Of course, your daily prenatal vitamin will help you get more of the good stuff you need, too.

But while you’re selecting more nutritious foods, there are also some foods and beverages you should steer clear of. That’s because they can be potentially harmful to you or your fetus — mainly due to risk of foodborne illness or high levels of mercury.

Whether it’s your first pregnancy or you’re looking for a refresher, OB/GYN Edward Chien, MD, shares advice for foods and drinks to avoid while pregnant. From sushi to safe caffeine levels, we’ve got you covered.

Foods and drinks to avoid when pregnant

Losing weight when you’re pregnant should not be considered.

“Pregnancy isn’t the time to lose weight,” Dr. Chien says. “However, when you’re pregnant it’s important to be thoughtful about the foods you choose to have a healthy pregnancy.”

Dr. Chien helps explain what foods shouldn’t be in your pregnancy diet and why.

Many kinds of fish are really good for you, and some of them are especially good for people who are pregnant.

The thing is, there truly are a whole lot of fish in the sea (not to mention in lakes and rivers, too, of course). And some should be avoided when you’re pregnant. This handy list from the Environmental Protection Agency and Food and Drug Administration can help you sort through it.

Doctors recommend, too, understanding where the fish you eat is sourced to understand the potential risks.

“Choosing the right fish to eat during pregnancy can be a little complicated,” Dr. Chien says. “There are a lot of variables in the kinds of fish, how they’re sourced and how they’re prepared. If you’re unsure what fish to eat and which to avoid, talk with your healthcare provider. They can help you understand better how often to eat certain seafood or whether it’s safe to eat at all.”

Some fish can be a rich source of protein and fat that provide some excellent nutrients for you and your fetus. Good fish for people who are pregnant includes choices like:

You can aim for two or three servings per week of these “best choices.”

As for what fish to avoid and limit during your pregnancy, Dr. Chien helps break down the guidelines.

When you’re pregnant, you’ll want to avoid fish with elevated levels of mercury. Exposure to too much mercury is toxic to humans and can cause brain damage or developmental delays in your baby. Mercury is hard for your body to get rid of and can build up in your system over time.

According to guidelines from the ACOG, it’s best to avoid the following fish, which have high levels of mercury:

When you’re pregnant, you should avoid all raw fish, which means forgoing the sushi and sashimi for now.

Raw fish has a higher risk of containing certain bacteria, viruses and parasites. While those little critters may not have affected you — or affected you too much — before you were pregnant, they can be dangerous to you and the fetus when you’re pregnant.

For that same reason, fish or shellfish that are seared or undercooked are also a no-go for people who are pregnant.

Limit: Some other kinds of fish

In addition to the fish you should avoid, ACOG guidelines recommend that anyone pregnant or breastfeeding should limit some types of fish.

Their guidelines recommend eating no more than one serving a week (in other words, no more than 6 ounces) of certain kinds of fish, such as:

Certain meats are best avoided during pregnancy, Dr. Chien says. That’s because they carry a higher risk of the dangerous listeria bacteria.

People who are pregnant should avoid these meats that are a high risk for listeria, including:

Cooked hot dogs can be eaten in moderation.

That queso at your favorite Mexican joint should be put on hold while you’re pregnant.

Soft cheeses are most likely to be unpasteurized. Pasteurization is the process by which certain foods are treated with heat to kill off certain common bacteria. Consuming unpasteurized products when you’re pregnant can put you at a higher risk of — you guessed it — listeria.

Unpasteurized cheeses to avoid include:

Some brands of these cheeses may be pasteurized in some cases. Check the label to be sure. If it says the product is “made with pasteurized milk,” it’s safe. If not, stay away.

Similar to soft cheeses, some juices and ciders may be unpasteurized and should be avoided when you’re pregnant. These drinks are most commonly found at some health food stores and farmers’ markets.

Again, check the label for an indication of whether the products you’re choosing have been pasteurized. Hints they may be unpasteurized include words like “natural” or “fresh-squeezed.” When it doubt, don’t try it out.

In general, it’s best to avoid eating foods with raw eggs because of potential exposure to salmonella. Researchers say you’re not at an increased risk for salmonella when you’re pregnant, but its effects can be worse during your pregnancy.

Like other food-borne illnesses, salmonella can cause fever and gastrointestinal symptoms and in rare cases can lead to intrauterine sepsis, a serious infection that can lead to fetal brain and lung problems.

When you’re pregnant, it’s important to steer clear of foods made with raw egg. This could include some common foods such as:

Additionally, some surprising dessert foods can contain raw eggs, including ice cream, icing, mousse and tiramisu. It’s best to check the nutrition label (or ask the chef in advance) before indulging.

6. Foods with high amounts of salt

We get plenty of salt in the foods that we eat. Salt causes your body to retain water, so Dr. Chien recommends that people who are pregnant eat salty foods in moderation.

“Too much salt could cause your blood pressure to rise, increasing your risk for preeclampsia, a pregnancy complication characterized by high blood pressure and swelling due to fluid retention,” notes Dr. Chien. Preeclampsia can result in preterm delivery and health complications like low birth weight and respiratory issues.

This one shouldn’t come as a surprise. Drinking alcohol affects fetal development and has lifelong consequences, including behavioral, physical and learning problems.

“You want to avoid all beer, wine and hard liquor during pregnancy,” Dr. Chien warns. “There is no safe level of consumption.”

Drinking alcohol during your pregnancy can lead to fetal alcohol syndrome (FAS). FAS is a severe condition that can’t be cured. It can also result in birth defects that affect your child’s heart, eyes, bones, ears and kidneys.

Yes, you can still have your daily morning coffee, but you may need to cut back on caffeine while you’re pregnant. Researchers say caffeine may cause the blood vessels in your uterus to constrict, which lowers blood supply to the fetus and inhibits fetal growth.

How much caffeine a drink has can vary tremendously depending on how it’s prepared.

“During your pregnancy, you’ll want to limit your consumption of caffeine to no more than 200 milligrams (mg) per day,” Dr. Chien says.

For reference, a standard cup of coffee (not your jumbo travel mug, but a regular ol’ 5 oz. cup) contains about 100 mg of caffeine. So, best to stick to not more than two cups of coffee per day when you’re pregnant.

Keep in mind that black, chamomile and green teas also contain some caffeine. Similar to coffee, these can be consumed in moderation, although caffeine levels vary depending on how much tea you use and how it’s prepared.

Why shouldn’t you eat certain foods when you’re pregnant?

People who are pregnant can have major complications from foodborne illnesses like listeriosis, which is caused by listeria bacteria. In people who are healthy and not pregnant, listeria may cause uncomfortable, but manageable, food poisoning symptoms, like:

“When you’re pregnant, listeria can cause similar flu-like symptoms, or it may not cause any symptoms in you at all,” Dr. Chien says. “But it can severely impact the development of your growing fetus.”

Contracting listeria during pregnancy has been linked to grave issues like:

The American College of Obstetricians and Gynecologists (ACOG) says that you don’t even have to feel symptoms to pass on listeria to your fetus.

In addition to the risk of listeriosis, Dr. Chien reminds us that people who are pregnant are at a higher risk for complications from other food sources as well. Mercury, for example, can cause brain damage and developmental delays in babies. An extra-salty diet can elevate your blood pressure. And too much caffeine can inhibit fetal growth.

If you have any questions about what foods to eat and which to avoid during your pregnancy, don’t hesitate to ask your healthcare provider. They’ll be able to advise you best on how to keep you healthy and encourage healthy fetal development.

Can You Safely Have a Vegetarian Pregnancy?

6 Top Benefits of Vitamin A

Expectant Moms: Choose a Prenatal Vitamin With These Key Nutrients

Is Fish Healthy for You? And the Best Kinds to Include in Your Diet 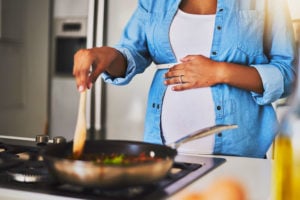 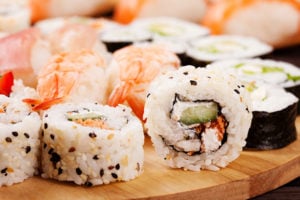 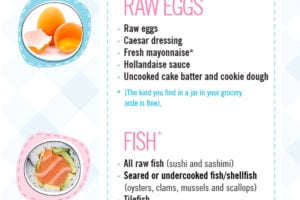 During pregnancy, be cautious of foods that are high risk for foodborne illness, mercury and other concerns. They can cause serious complications. An OB/GYN breaks it down.