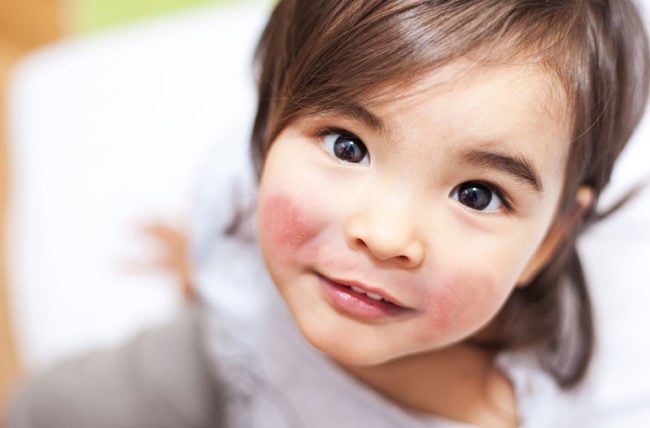 A rash has blossomed on your baby’s face. Of course, you’re concerned. You wonder if it hurts. Will it spread? What does it mean?

Fifth disease, or erythema infectiosum, is a viral infection that can cause a rash on the face and body. It’s sometimes also called “slapped face syndrome.” It can also affect other parts of the body, including the upper arms, torso and legs, appearing as a more spread out red, lacy rash.

Pediatrician Kimberly Churbock, MD, says it’s common for babies and younger kids to bring home this infection from daycare or preschool ― and it’s usually not cause for alarm. Here, she explains what you need to know about fifth disease:

Q: How can I tell if my child might have Fifth’s disease?

A: Keep an eye out for mild aches, fatigue, cold-like symptoms and sometimes a low-grade fever, which go away days before the rash appears. The rash may itch, but most children with Fifth disease aren’t as uncomfortable as their parents may assume by the look of it!

Parents often mistaken Fifth disease for chapped cheeks or another common viral/bacterial culprit in rashes: measles, scarlet fever, rubella, Duke’s disease (now considered one and the same as scarlet fever) or roseola. (Fun fact: Fifth disease was so named because it was the fifth of these six rash-producing infections to be identified.)

Rashes related to eczema, poison ivy and hand-foot-mouth disease can also be confused with Fifth disease.

Your child’s pediatrician can usually diagnose Fifth disease by simply looking at the rash.

A: A virus called parvovirus B19 causes Fifth disease. It’s spread through saliva and mucus when little ones cough, sneeze, share drinking cups, put toys in their mouth or touch each other’s hands and faces.

Q: When is my child contagious?

A: Once the rash appears, they typically aren’t contagious anymore. (Of course, this makes it all the harder to manage spreading Fifth’s disease in a school or other group setting.)

In kids with healthy immune systems, the virus usually goes away on its own within two weeks.

Q: How do you soothe those cheeks?

A: Try using an oral or topical antihistamine to help relieve the itch and keep the rash from getting more angry-looking from your child’s scratching. If they have some fever or achiness, including headache, acetaminophen or ibuprofen will help them feel better.

Q: Is there any way to protect my child from Fifth’s disease?

A: Unlike measles and rubella, there’s no vaccination for Fifth disease yet. Keeping your child home during a known outbreak at daycare or school might keep your child from contracting it, but preventing it otherwise is difficult. Many kids are exposed to Fifth disease and other infections and develop immunity without ever having symptoms of the disease itself.

Q: Who should be especially careful around someone with Fifth disease?

A: While most people experience only mild symptoms, children or adults with compromised immune systems or blood disorders, or women who are pregnant, should take extra care to avoid being around someone with Fifth disease. And they should see their doctor if they believe they have been exposed.

Older children and adults with Fifth disease may experience more joint stiffness than younger children, but this goes away within weeks.

5 Rashes Your Child May Bring Home From Preschool

Why You Shouldn’t Skip the MMR Vaccine for Kids

Are COVID Toes and Rashes Common Symptoms of the Coronavirus?

What To Know About Hand, Foot and Mouth Disease

What to Do If Your Child Has Eczema Our pediatrician offers a primer on what parents should know about a disease that goes by many names: Fifth disease, erythema infectiosum or “slapped face syndrome.”