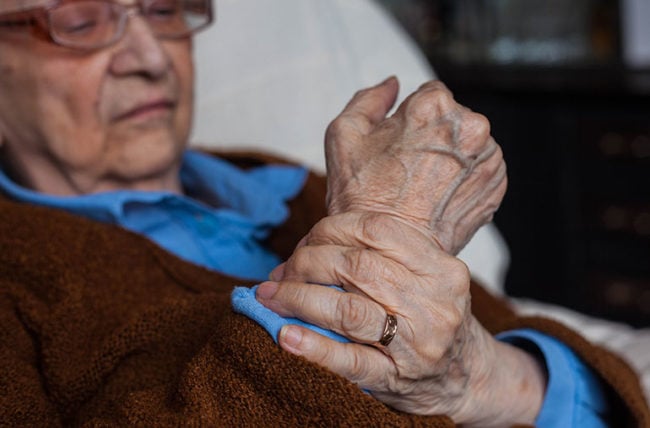 If your arthritis treatment plan includes an oral nonsteroidal anti-inflammatory drug (NSAID), such as ibuprofen (Motrin®, Advil®) or naproxen (Aleve®), you may be concerned about the risks associated with these drugs.

If you have osteoarthritis in only a few joints, you may find pain relief in a safer form ― topical NSAIDs. “The risks are still there with topical application, but they are significantly reduced,” Dr. Konya says.

What are topical NSAIDs?

A topical medication is one that’s applied directly to the skin. In the case of arthritis, it goes on the skin over the painful joint. The drug penetrates the skin, enters the joint and reduces the pain signals in the joint.

The level of drug entering the bloodstream is much lower than when the NSAID is taken by mouth. For example, topical NSAIDs reduce the systemic exposure by almost 90 percent. This minimizes the risk of harmful side effects.

The topical NSAIDs available in the United States contain the drug diclofenac, and they require a prescription. Diclofenac is available in three topical formulations: gel, liquid and patch.

A review of several clinical studies, found that Voltaren gel is particularly effective. “In this review, 60 percent of patients got 50 percent relief with topical NSAIDs,” says Dr. Konya. This was similar to the pain relief from oral NSAIDs and better than the placebo.

Topical NSAIDs are usually very well-tolerated. However, approximately 1 in 20 people experience a mild, temporary skin reaction, such as rash, redness, dryness or itchiness.

Is a topical NSAID right for you?

The American College of Rheumatology and the Centers for Disease Control and Prevention both recommend topical NSAIDs as one of the initial treatments for arthritic pain.

“Topical NSAIDs are best for people with only a few painful joints,” says Dr. Konya. If you apply the NSAID to several joints you may exceed the recommended dosage and increase the risk of side effects. “Patients with arthritis in multiple joints are better off treated with an oral NSAID or acetaminophen unless there’s a medical reason they shouldn’t take them.”

Topical NSAIDs are particularly good for hand, knee or elbow arthritis. Because these joints are close to the surface of the skin they are more suited to topical treatment than deeper joints like the hip or shoulder.

5 Things You Need to Know About Lupus

Topical Pain Relief: What Is It + How Does It Work?

Acetaminophen vs. Ibuprofen: Which Works Better?

How Can I Find Relief From the Dryness in My Eyes + Mouth Caused by Sjögren’s? Our expert explains when topical NSAIDs are a good option to treat arthritis pain ― while minimizing possible NSAID-related side effects.