A leaky tricuspid valve — a condition known as tricuspid regurgitation — is a very serious problem. When the valve fails to close tightly between beats, blood that should flow out of the heart into the lungs flows instead backwards into the heart. If left untreated, tricuspid regurgitation will progress from mild to moderate to torrential (a term coined to mean “worse than severe”), inevitably causing right-side heart failure and death.

Today, in patients deemed at high risk for surgery due to age or frailty, a leaky tricuspid valve can be fixed in a minimally invasive procedure using a new valve and procedure pioneered at Cleveland Clinic.

The GATE™ tricuspid valved stent received compassionate-use approval by the U.S. Food & Drug Administration in November 2016. This designation allows an investigational product to be used outside of a clinical trial. Since this time, the new procedure has saved the lives — and improved the quality of life — of more than a dozen patients facing certain death without it.

“We are satisfied with the results of this procedure in all the cases we have done to date,” says heart surgeon Jose Navia, MD, Vice Chair for Innovation in the Department of Thoracic and Cardiovascular Surgery. Dr. Navia is the inventor of the GATE system.

The tricuspid valve is the third heart valve for which a catheter-based implantation system has been developed.

Researchers tackled the aortic valve first, primarily due to need — it’s the most common valve to need repair or replacement. Today, transcatheter aortic valve replacement, or TAVR, is preferred over surgery for most patients.

Catheter-based mitral valve repair is more difficult and is taking longer to perfect. However, it is expected to become routine in the near future.

The tricuspid valve initially received less attention because it fails less often, but also because treating the valve was a more daunting prospect. Patients with tricuspid disease often have mitral valve disease, as well as hypertension, atrial fibrillation and other problems. Although the valve can be repaired or replaced surgically, the operation carries a mortality rate as high as 35% and may not completely eliminate regurgitation.

Dr. Navia and colleagues were the first to tackle the problem by designing a new type of valve, as well as a catheter-based procedure for delivering it to the heart.

The GATE bioprosthesis is crimped and packed into the end of an L-shaped delivery device that is inserted in the jugular vein in the neck. This unconventional approach is the most direct way to reach the tricuspid valve, which is located between the right atrium and the right ventricle. The valve can also be delivered through a small incision made between the ribs.

Once the valve is in place, it self-expands and is held in place by barbed graspers at one end and pressure at the other end. The process takes only seconds and is performed on a beating heart.

All patients are experiencing improvement in tricuspid regurgitation and valve function and fewer symptoms.

Since the development of the GATE tricuspid stented valve, two additional valve models have made their debut: the CardioBand™ Tricuspid System, which has been approved for use in Europe, and the FORMA Tricuspid Transcatheter
Repair System, which is still in clinical trials.

At this time, the GATE system can be used only in patients with severe, symptomatic tricuspid regurgitation considered to be at prohibitive surgical risk. However, Cleveland Clinic’s team believes it has the potential to be used in patients who aren’t as sick, but who would nevertheless benefit from less‑invasive surgery. Plans are underway for a clinical trial of the valve in low-risk patients.

Heart Valve Problems: Is Repair or Replacement Best for You?

If I Have a Heart Condition, Do I Need to Take Antibiotics Before Going to the Dentist? 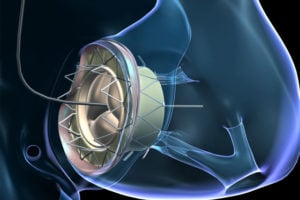 A valved stent developed at Cleveland Clinic is proving
to be a lifesaver for patients with leaky tricuspid valves
who are too fragile to undergo surgery. The treatment
prevents inevitable right-sided heart failure and death.