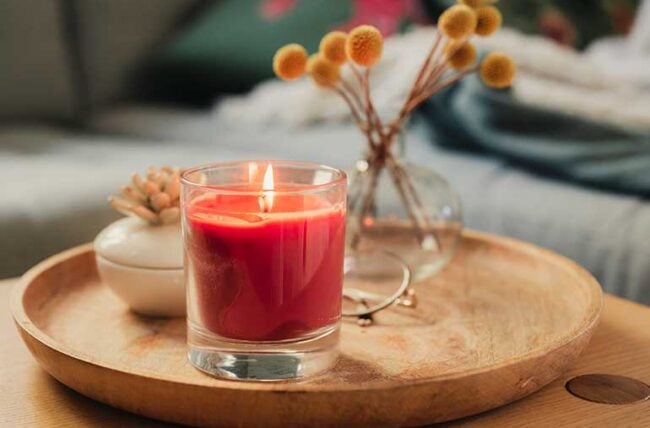 There’s a reason candles play a role in religious traditions and mindfulness practices around the world. Fire is foundational to human life, and we respond to it accordingly. A 2014 study in Evolutionary Psychology found that even looking at a recording of a hearth or campfire can induce physical and mental relaxation.

It’s little wonder then that so many of us love burning candles — especially scented candles — in our homes.

But over the past several years, a number of articles have popped up suggesting that burning candles releases potentially dangerous hydrocarbons into the air.

It’s a scary thing to read, but don’t let it dampen your mood. At least not yet.

We spoke to pulmonologist Sobia Farooq, MD, about the dangers candles pose to your health. Spoiler alert: Burning candles can contribute to indoor air pollution, but given all the available research, she’s not concerned for people who choose to light them up (in a well-ventilated space, at least).

Can burning candles be bad for your health?

When it comes to candles, the question isn’t whether they contribute to air pollution. We know they do because they’re a combustion product. But what the medical and scientific community is split on is whether or not the emissions they generate, tiny as they are, can meaningfully impact your health.

What happens when you burn a candle?

When you burn a candle, you release hydrocarbons — chemical compounds consisting of hydrogen and carbon — into the air. In particular, burning candles releases trace quantities of toluene and benzene.

We commonly use toluene in paint thinners and adhesives. Without proper ventilation, toluene exposure can irritate your eyes, nose, throat and skin. It can also cause headaches, dizziness, confusion and anxiety.

Benzene is a gas emitted by forest fires, volcanoes, and burning coal or oil. We use benzene primarily in industrial and pharmaceutical settings, but the vast majority (90%) of all benzene exposure occurs as a consequence of smoking. Benzene is carcinogenic, having been found to increase the risk of leukemia and other blood cancers.

While you wouldn’t want to breathe in significant quantities of either toluene, benzene or any other hydrocarbons, the small amount released when you burn a candle are only cause for concern in certain situations.

According to Dr. Farooq, a small number of studies suggest an association between candle burning and bladder cancer. “All these volatile organic hydrocarbons accumulate in the blood,” she explains. “They eventually get excreted through the bladder, hence the link with bladder cancer.”

As a result, Dr. Farooq says people under surveillance for, living with or in remission from bladder cancer might want to go easy on the candles. Likewise, she encourages people with chronic lung conditions like chronic obstructive pulmonary disease (COPD) to be mindful of the levels of air pollution in their homes.

Frankly, though, the science isn’t strong enough to suggest we should stop buying and burning candles.

In fact, we engage in far higher-risk activities every day. According to Dr. Farooq, indoor cooking increases the particulate matter in the air and has been linked to respiratory illnesses. A scented candle simply isn’t dangerous by comparison.

“There is no imminent danger,” Dr. Farooq says. “You just have to be mindful about investing in high-quality candles and keeping them in well-ventilated areas.”

Are some waxes better than others?

While concerns about candle burning are overblown, it’s true that some candles are better than others. Wax type and quality can change the amount and kind of emissions the candle generates. While there’s no definitive science proving it does any harm, Dr. Farooq suggests avoiding paraffin wax. Paraffin is made from petroleum, and seems to generate greater emissions than other waxes. And candles made from paraffin tend to be cheaper.

“In some cases,” she explains, “these cheaper products have more formaldehyde-generating materials and a lower melting point. It’s been suggested — but not proven — that cheaper candles are more dangerous because they have more volatile organic carbons in them.”

If listed, check the paraffin content of the candle you’re considering buying. Whenever you can, opt for beeswax, soy or other plant-based waxes instead.

While they may be pretty to look at, Dr. Farooq also suggests skipping candles that have been dyed. “The dye used to color the candles has benzidine in it,” she says, which is also linked to an increased risk of bladder cancer.

For every person who loves to unwind with a scented candle, there’s another person who gets a headache (or a runny nose) just thinking about them.

There isn’t any science that suggests scented candles are inherently more dangerous than the unscented variety. Like all candles, they release volatile organic compounds, but do so in quantities that shouldn’t pose a health risk. For the safest possible aromatherapeutic adventure, select high-quality candles that don’t use dye or paraffin.

Simply put, when it comes to scented candles, your mileage may vary.

What about wick toxicity?

While once a source of considerable concern, many countries have taken action to prevent the use of lead and metal-cored candle wicks, which can produce dangerous emissions and cause lead poisoning.

Australia was the first country to ban the use of lead wicks. While most American manufacturers stopped using lead in their candle wicks back in the 1970s, the Consumer Product Safety Commission (CPSC) didn’t ban the sale and importation of candles with lead-core wicks until 2003.

If you’re unsure whether your country has banned lead-core candle wicks, just make a point to shop for candles with paper-core, cotton or wood wicks.

How you can safely burn candles

If you’re like most people, the therapeutic benefits of burning candles far outweigh any health risks they may pose. But that doesn’t mean you can’t make healthy choices to improve the experience and protect against accidents.

Treat yourself to high-quality candles

Good news for scented candle lovers everywhere! Expensive candles may be bad for your wallet, but they’re a good investment in your health.

According to Dr. Farooq, the candle industry isn’t as well-regulated as it could be. “Studies suggest that lower-quality candles emit more particulate matter and chemicals. Higher-quality candles burn off very slowly.” So, if you’re looking to minimize risk, stick with the fancy stuff.

Of course, the safest candle in the world is only as safe as the person burning it. That’s why following candle safety guidelines is crucially important.

If you’re looking for a reason to stop burning candles altogether, the most obvious safety hazard — fire — is also the most significant. According to the National Fire Protection Association (NFPA), firefighters respond to approximately 7,400 structure fires in the U.S. caused by candles every year. The result: an average of 90 deaths, 670 injuries, and nearly $300 million in property damage.

While they’re significantly smaller than the fires we burn in bonfires, fire pits and fireplaces, we should still use caution and common sense when interacting with candles. The following safety tips will help keep you and your family safe:

If you’d rather avoid candles altogether, but still want the feeling of a lit candle in your home, consider these alternatives:

While not all candles are created equal, there’s little scientific evidence to suggest that they’re a danger to your health. As long as you’re taking all the proper fire-safety precautions, go ahead and “get lit.”

How to Keep Holiday Scents From Causing Asthma Attacks

Smog and Pollution: What Do Air Quality Alerts Actually Mean?

Is Chlorine in Indoor Swimming Pools Hard on Your Lungs?

House Fires: The Fatal Danger Beyond the Flames

Worried if Candles Are Toxic?

Burning candles does release hydrocarbons into the air, but not enough to pose a significant health risk to most people. Just choose your candles wisely, and follow these tips to stay as safe as possible!