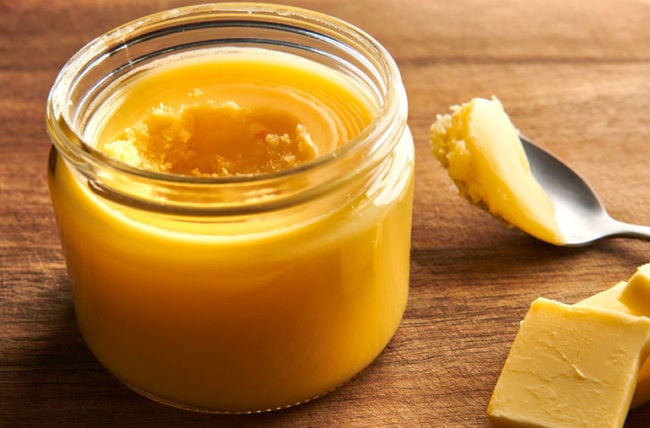 Butter makes everything better — but does ghee count, too? The ancient form of butter is fast becoming a 21st-century staple. And some say ghee’s benefits aren’t just about flavor.

“Some research has shown that people who consume ghee butter in traditional ways may have lower risks of heart disease,” says registered dietitian Candace O’Neill. “But in the ghee vs. butter debate, there’s a lot of misinformation out there about ghee being the better choice.”

When you churn milk or cream long enough, it separates into two components: butterfat (solid) and buttermilk (liquid). Butter is the butterfat. Ghee takes this process a step further.

“Ghee is clarified butter, which means it’s heated to the point where manufacturers can remove any remaining water and caramelized milk solids. What’s left — the ghee — is fat that’s even more concentrated,” says O’Neill.

In traditional Indian and East Asian cooking, ghee has been a go-to for centuries. “It has a nuttier, richer taste than butter,” says O’Neill. “Many people also enjoy ghee because it has a higher smoke point (the temperature during cooking when the oil starts smoking) than butter.”

O’Neill recommends using ghee like butter. “But if you’re buying a jar of ghee from a grocery store, you may want to mix before using it because it can separate.”

While some tout ghee as butter’s healthier cousin, O’Neill says that ghee’s perceived benefits may be overblown. “There is no significant difference between the two. The fat and vitamin content is almost the same.”

A. It’s not dairy-free, though ghee may be a good choice for people who are lactose-intolerant. That’s because it contains extremely low levels of lactose and casein (a milk protein). But so does butter.

“Some people who avoid dairy for digestive reasons may tolerate ghee better than butter. But in general, they should be fine with butter as well because the amounts of lactose and casein are so small,” notes O’Neill. “If you have a casein allergy, you should definitely avoid consuming both in case of cross-contamination.”

Q. Is ghee better for digestion and colon health?

A. Dairy products contain a compound called butyrate, which is a type of short-chain fatty acid. Butyrate is the main energy source for the cells that line your colon and helps them regenerate. This process is important for colon health and digestion.

Some herald ghee as a rich source of butyrate, but O’Neill says not so fast. “Ghee has about 1% of butyrate, which is a tiny, insignificant amount compared to what your colon produces,” she says.

A. It’s not hard to find a blog claiming ghee is a metabolism-booster. But what does science say?

“Ghee contains medium-chain triglyceride (MCT) oil, which some research suggests could help with weight loss. But it’s in trace amounts, so if you’re looking to get MCT oil in your diet, ghee’s not the best way to go,” says O’Neill. “Ghee and butter also have a compound called conjugated linoleic acid (CLA), which may help reduce fat mass. But again, ghee only has insignificant amounts of it.”

O’Neill says choosing ghee should be a matter of personal preference and not based on any perceived health benefits. “The potential compounds that ghee contains are not significant enough to improve your health.”

Your Fridge: 3 Foods You Should Pitch (and Why)

How to Make Healthier Lunches for Your Student Athlete

Can These Foods Help Prevent Stroke?

5 Best Ways to Win Your Battle With Weight Loss 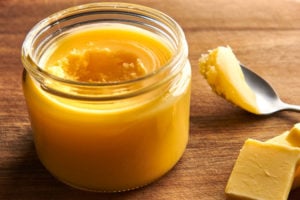 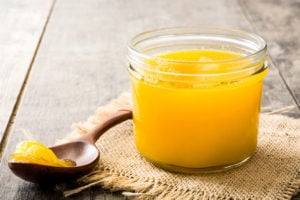 In the ghee vs. butter debate, which fat reigns supreme? A registered dietitian clarifies ghee’s health benefits, including if ghee is good for weight loss.