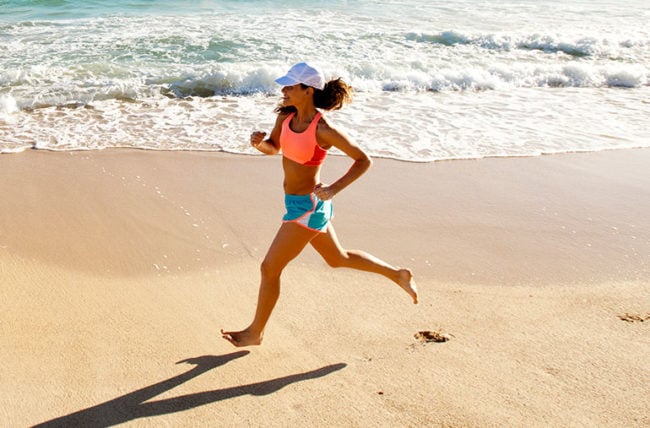 Could the secret to injury-free running really be as simple as kicking off your shoes and going barefoot? A zealous band of runners leaving five-toed footprints certainly believes so — and they may be onto something.

Barefoot running is in our DNA after all. Humans didn’t start trotting around this planet with pillowy cushioning and arch supports beneath their feet. It was just skin to ground for many millennia.

But before you toss out your running shoes and go archaic chic, read what sports physical therapist Michael Bogden, PT, DPT, SCS, FAAOMPT, has to say.

Is running barefoot good for you?

Well, it might be … at least in theory. Research is too limited at the moment to provide a definitive science-based answer as to the benefits of barefoot running, according to the American Podiatric Medical Association.

But that lack of research hasn’t slowed the growing “natural running” movement, where there’s a strong belief that going shoeless reduces the risk of chronic injuries. The reason? It all comes down to running technique.

“For most people, you’re probably going to have better mechanics running barefoot,” says Bogden. “It encourages a running pattern that is more efficient.”

Barefoot strides are usually shorter and more compact, touching down more directly beneath your torso. That gait better aligns with your body’s center of gravity and usually leads to an increased bend in the knee, allowing your joints to better absorb the pounding.

Runners who go barefoot also tend to land more on the ball of their foot than the heel, which adds efficiency of movement.

Within the barefoot running community, the claims of health benefits cover as much ground as a marathoner in extended training. But how much of a difference can ditching your shoes really make?

Let’s break down three arguments for going au naturel with your feet.

The key, though? The barefoot activity shouldn’t cause pain. Consider an “owie” feeling a sign that you should keep your shoes on, suggests Bogden.

In an indirect way, barefoot running might help keep dreaded plantar fasciitis (pain in the bottom of your foot near your heel) issues at bay. Why? As previously noted, running with naked feet often leads to better technique and cadence. Sloppy running form can strain your plantar fascia.

“Bad running technique leads to less efficient firing patterns of the muscles in your lower leg, which can contribute to overuse injuries such as plantar fasciitis,” says Bogden.

Springy soles in running shoes work to propel you forward. That helpful bounce disappears when you take the shoes off.  “Barefoot running is going to be tougher and more challenging, so there’s a good chance you’ll burn more calories doing it,” says Bogden.

Ever step on a LEGO block and let out a howl while walking through your kid’s room? Well, just try to imagine what landing on a rock, stick or prickly weed might feel like while running barefoot.

“Running without shoes definitely leaves your feet vulnerable to cuts, puncture wounds and infection,” notes Bogden. Logging barefoot miles on hot pavement or in extreme cold also could damage the soles of your feet.

Anyone being treated for diabetic neuropathy — which can reduce feeling in your feet — also might want to avoid barefoot running. The American Diabetes Association recommends that people with diabetes always wear shoes and socks when running or walking.

So shoes or no shoes to run?

This doesn’t have to be an either-or question. Instead, consider doing both.

Bogden suggests trying barefoot running as a cross-training activity, with workouts on a grassy field. View it as a variation in your routine, like hills or intervals. “Most runners would benefit from doing some training barefoot,” he says. “It can be a great tool for variety.”

Minimalist-style shoes offer a middle-ground option, too. These shoes have less cushioning and support than traditional running gear, while still offering some protection for your feet. (More on that later.)

But Bogden cautions against becoming a full-time barefoot or minimalist runner: “Should you train with every single run for weeks on end in a barefoot style? For most people, the answer is probably not,” he says. “But having it as a component of your training isn’t a bad idea.”

How to try barefoot running

“Transition into barefoot running as if you’re taking on a new activity to give your foot muscles times to adapt,” says Bogden. “It’s not just a matter of taking off your shoes one day. There should be a thought process and training plan behind it.”

Starting in a minimalist shoe with little to zero drop from heel to toe is a good first step, suggests Bogden. (The drop is the difference in height between the back and front of your shoe.)

Give your body time to get used to running with less support beneath your feet. Consider scaling back your weekly mileage by half as you switch to minimalist shoes. Add the distance back in slowly. A good rule of thumb is to increase by no more than 10% a week.

“Changing to that style shoe is going to tax some muscles more and some muscles less,” says Bogden. “It’ll change the load on joint and tendons, too.”

Use foam rolling, massage or vibration guns on the lower legs and feet to boost recovery from the increased work being placed on them, advises Bogden. It’ll help ease the transition to the new running method.

If the adjustment to minimalist shoes goes well, you could consider progressing to barefoot running. Look for softer surfaces (such as a football field) to begin and, once again, scale back distance.

The potential benefits of barefoot running shouldn’t be seen as an indictment against running shoes. “This isn’t about demonizing our shoes,” notes Bogden. “But we do need to understand that shoes can change our running patterns.”

So consider throwing in some barefoot or minimalist shoe running to reclaim your natural form. It might help you better understand what proper running feels like and push you toward better technique.

Are Minimalist ‘Toe Shoes’ Good for Your Feet?

The 6 Most Common Running Injuries (Plus How to Treat Them)

When Do Babies Start Walking? 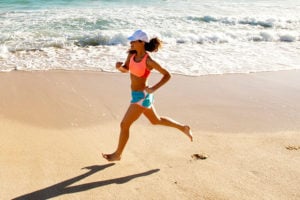 The Benefits of Barefoot Running

Could barefoot running be the key to building a better running technique? The answer just might be yes. Learn about the pros and cons of shoeless running.