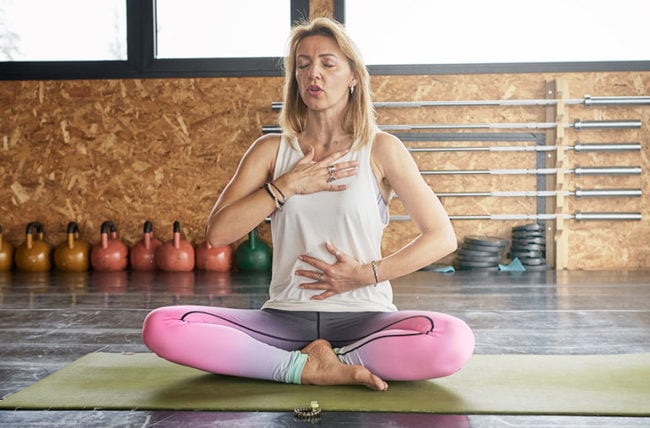 If you’ve ever felt anxious or overwhelmed, some well-intentioned person has probably given you the advice, “Just breathe.” When you’re in the midst of a stressful moment, though, that can be much easier said than done.

Integrative medicine specialist Melissa Young, MD, explains how to do the box breathing technique, a simple but powerful method of focusing on your breath that can help you get — and stay — calm.

What is box breathing?

Box breathing is a form of yogic deep breathing employed by the United States Navy SEALs and by stressed-out people everywhere. It’s also known as sama vritti pranayama, born of the yogic practice of pranayama, or focusing on the breath.

This technique goes by other names, too:

The benefits of box breathing

“I love breathwork because it’s easy, it can be done anywhere and it has a potent effect on your physiology,” Dr. Young says. “It’s really very powerful.”

She explains what box breathing, like other forms of breathwork, does for your body.

The biggest benefit of box breathing is relaxation, especially in times of stress. Studies show that regulating your breath can lower levels of the stress hormone cortisol and maybe even help lower blood pressure.

“When we’re anxious, we breathe shallowly and quickly, which actually creates more anxiety within your body,” Dr. Young explains. “We can use breathwork to move out of the fight-or-flight state and into that parasympathetic nervous system.”

You don’t have to be stressed to benefit from this breath exercise. Practicing box breathing is an opportunity to bring mindfulness to your breath, which is a valuable practice even in tranquil times.

“It allows you to slow your breath, and it also has an aspect of meditation,” Dr. Young says. “As you’re breathing, you’re also silently counting, which is a kind of mantra meditation that, again, calms the nervous system and brings you into the present moment.”

How to do box breathing

Don’t put too much pressure on yourself to master the box breathing method right away. “You don’t want to go too slowly or too quickly,” Dr. Young says. “Stay at your comfort level, making sure you’re breathing very gently and not straining.”

How simple is that? In fact, box breathing’s straightforwardness is what makes it so accessible — and so impactful.

“Box breathing’s simplicity is its greatest strength,” Dr. Young says. “When you start out with other forms of breathwork, you can almost get more anxious by overthinking it. But this is just very simple breathing and counting.”

She recommends practicing one or two times a day, regardless of how you’re feeling. Try it out first thing in the morning or after a stressful day of work.

At first, you may have a hard time keeping your breath steady for all those counts of four. But as with anything, you can get better at it with a little bit of practice.

“Over time, this becomes easier, and you’ll be able to extend that count to four more easily and slow your breathing down for even more benefit,” Dr. Young says.

And working on your box breathing in times of calm can help you harness it in times of anxiety, even going so far as to lessen your body’s overall response to stress.

“The nervous system is not fixed; it’s plastic,” Dr. Young says. “We can change it by learning how to be less responsive to stress and how to calm that response.”

How To Stop Your Heart Palpitations at Home

How To Do the 4-7-8 Breathing Exercise

How To Calm Your Anxiety at Night

How and Why To Try Alternate Nostril Breathing 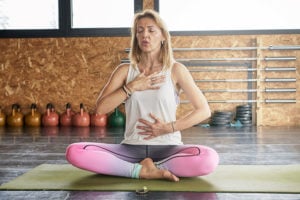 How Box Breathing Can Help You Destress

If you’ve ever felt anxious or overwhelmed, some well-intentioned person has probably told you, “Just breathe.” When you’re in the midst of a stressful moment, though, that can be much easier said than done. The box breathing technique, a simple but powerful method of focusing on your breath, can help you get — and stay — calm.