If you have obstructive sleep apnea, your airway tends to collapse when you sleep. After snoring, gasping and choking your way through the night, you’re getting by on little rest the next day.

The most common solution is CPAP (continuous positive airway pressure). While your partner may appreciate quieter nights, chances are you’re not a big fan.

“It’s the standard treatment for obstructive sleep apnea, but about half the people don’t like it very much,” explains surgical sleep medicine specialist Alan Kominsky, MD.

A Cleveland Clinic study found that just 44% of the patients prescribed CPAP for obstructive sleep apnea were still using it three years later.

That means a significant number of patients are not being treated for obstructive sleep apnea, which can lead to hypertension, stroke and cardiac problems.

Dental appliances can help patients with mild to moderate obstructive sleep apnea. Surgery to remove obstructive tissue is also an option. But it’s invasive and requires an extensive recovery.

Another option is an implantable, programmable device approved by the U.S. Food and Drug Administration in 2014. The Inspire® upper airway stimulation device looks like a heart pacemaker.

It has two leads. One senses your breathing. The other stimulates the nerve that controls the tongue, to move it forward and open your throat.

“A pivotal trial demonstrated the device’s safety and effectiveness in a small group of patients with moderate to severe obstructive sleep apnea,” says Dr. Kominsky. Five years later, those improvements have been measured and are persistent.

The airway stimulation device is available at select U.S. medical centers, including Cleveland Clinic. To be eligible for it:

Eligible patients must have a recent sleep study. The next step is to perform sleep endoscopy. This outpatient procedure begins with sedation so that doctors can insert an endoscope into the airway. This lets them view the pattern of airway collapse to confirm the device will help.

The stimulator system is then implanted under general anesthesia in an outpatient procedure.

Mouth Taping: Is It Safe?

Can PAP Therapy Machines Increase the Risk of Spreading the Coronavirus?

Sleep Apnea Can Make Managing Diabetes More Difficult: What You Need To Know 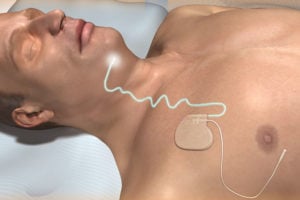 Don’t Like CPAP? An Implantable Device Is Another Option for Your Sleep Apnea

Many people with obstructive sleep apnea find continuous positive airway pressure (CPAP) as uncomfortable as snoring and gasping through the night. Learn about an implantable device that serves as another option for those with this serious condition.