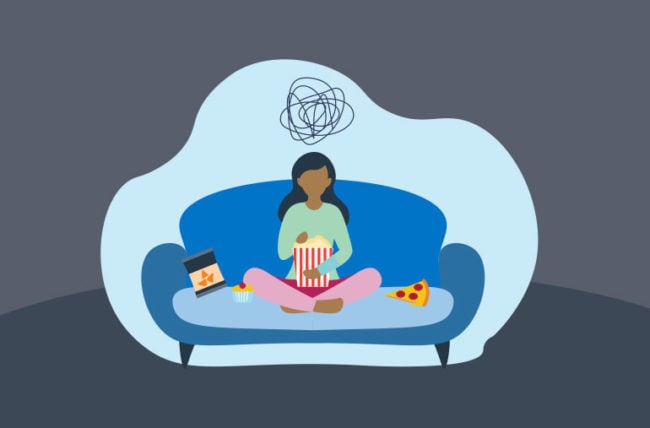 In a perfect world, you’d decide to have a snack or dinner in response to hunger pangs rumbling from your stomach. However, reality is far different. How many times have you absentmindedly noshed on too many chips during a stressful football game, or reached for an extra piece of chocolate because you’re feeling sad or bored?

While an occasional overindulgence is perfectly OK, both of these scenarios can be an example of emotional eating.

There’s a biological connection between emotional eating and stress — namely that your body starts producing a hormone called cortisol when you start feeling alarmed or upset.

“Cortisol makes us crave sugary, fatty or salty foods,” says Dr. Albers. “Back in ancient times during times of stress, you needed all the calories you could get because you were involved in fight-or-flight situations. When you’re feeling stressed, you’re dealing with your ancient biology telling you, ‘Go get some food.’”

Society and culture also portrays food as something ideal if you need a mood boost or pick-me-up. “If you look at commercials or ads, they often encourage people to turn to food as something that’s soothing,” says Dr. Albers. “Food is also something that’s available 24/7. We can reach for it any time of the day. So when we’re feeling stressed, it is very easy to make a beeline for food.”

Emotional eating has many root causes.

Growing up, you probably leaned on external cues to let you know you were done eating. “For example, if I’m eating a plate of food, one of the external cues is when my plate is finished, I’m done,” says Dr. Albers. “Or if a parent says to me, ‘You need to finish your plate,’ then you’re done, instead of those internal cues of paying attention to the stop and start that our body gives us.” With emotional eating, you often have trouble telling the difference between these internal cues — which signify physical hunger, or the signs your body send to let you know it’s time for nourishment — and emotional hunger.

Dieting often leads to emotional eating, because trying to cut back on unhealthy things often means you’re limiting how much you eat and are eliminating certain foods. “Restrictive eating is one of the biggest triggers of emotional eating,” says Dr. Albers.

Anxiety is another “significant trigger” for emotional eating, she adds. But while many people eat more when they’re feeling anxious, others go in the opposite direction. “They don’t eat because they lose their appetite,” says Dr. Albers. “Their emotions are so great and so intense that it pushes away or supersedes that feeling of hunger, and they no longer tune into it. This can be problematic because we need food to help us to deal with stress and emotions.”

Emotional eating can also arise from situational stresses. For example, the COVID-19 pandemic disrupted routines and led to isolation and boredom, creating an ideal environment for emotional eating. “We do a lot of boredom eating because eating feels purposeful,” says Dr. Albers. “It fills up our time, it gives us some entertainment. During the pandemic, a lot of anxiety, stress and boredom eating happened.”

Seasonal stressors like colder temperatures and earlier sunsets, as well as the holidays, can also lead to episodes of emotional eating. “Holidays can bring up a lot of busyness, stress, contact with family members, and availability of all kinds of great holiday treats,” says Dr. Albers. “Sometimes it’s the perfect storm for emotional eating.”

What are the signs of emotional eating?

There are several signs that you might be someone prone to emotional eating.

Sudden, urgent cravings. Physical hunger develops slowly over time. “After you eat, you may be satisfied for a while and then your hunger is going to grow,” says Dr. Albers. “You desire a variety of different foods, you feel the sensation of fullness and you can track feeling more satisfied or full as you’re eating.” Emotional eating, in contrast, comes on suddenly and might have urgency, she notes. “You say, ‘I need to eat something. I need some chocolate.’

Craving only certain foods. Not only do your cravings come on suddenly, but you might only want to eat certain foods. “If you’re saying to yourself, ‘I don’t want to just eat something because I’m hungry. I want chocolate, and that’s all that’s going to satisfy me,’ it’s a red flag of emotional eating,” says Dr. Albers.

Overeating. Overeating is another hallmark of emotional eating. “The sensation that a lot of my clients talk about is wanting that food to make them feel better or satisfied. No matter how much they eat, it never really brings them to that feeling until they feel sick or overly full and then they stop eating,” says Dr. Albers. “But they’re hoping that as they’re eating, it’s going to change their sensation in some way.”

Shame or guilt. Feeling emotional distress, like shame or guilt, over your eating habits is another sign.

When does emotional eating become a problem?

Occasionally having too much unhealthy food isn’t harmful. “Sometimes you just need some chocolate to feel better, and that’s okay,” says Dr. Albers. However, this indulgence can be an issue when it happens a lot — or turns into your main coping mechanism. “It’s when you’re feeling stressed, and your first or only way of coping is turning to food. That’s often when emotional eating becomes more of a problem or an issue.”

How to stop emotional eating

There are many strategies to stop emotional eating. And while there’s no one-size-fits-all approach, good rules to follow include:

Where to turn to for help

If you’re dealing with emotional eating, it’s best to see a physician or a therapist and have an assessment to determine if you have an underlying medical issue or something else going on. For example, chronic pain can turn to emotional eating as a way to feel better, while depression can cause appetite changes.

“One of the things that we really talk about when someone comes in is, ‘Is this the primary issue, or is there another issue that’s making your emotional eating worse?’” says Dr. Albers. “So if you’re feeling depressed, is it the depression that needs to be treated to help the emotional eating? Or is it the other way around: Is emotional eating causing or exacerbating the depression? It’s a chicken and egg approach sometimes.”

However, you also have the power to change your eating habits, by just slowing down and being mindful.

“Before you take a bite, tune into yourself and ask yourself just that question, ‘Am I eating because I’m physically hungry, or because I’m emotionally feeling something?’” says Dr. Albers. “You would be surprised that when you pause and take that mindful moment, how often you discover, ‘You know what? Maybe I’m feeling bored right now’ or ‘Maybe I’m really not that hungry. I’m feeling anxious.’” Having that awareness can really shift your coping in a very different direction.”

Hear more on this topic from Dr. Susan Albers on the Health Essentials podcast.

Why You Stress Eat and How To Stop

5 Best Ways to Win Your Battle With Weight Loss

Decoding Your Hunger: Are You Really Hungry or Not?

Here’s the Deal With Your Junk Food Cravings

What Is Emotional Eating?

The technical definition of emotional eating is eating in order to escape, numb, change or amplify our feelings. An expert weighs in with tips on how to overcome this.