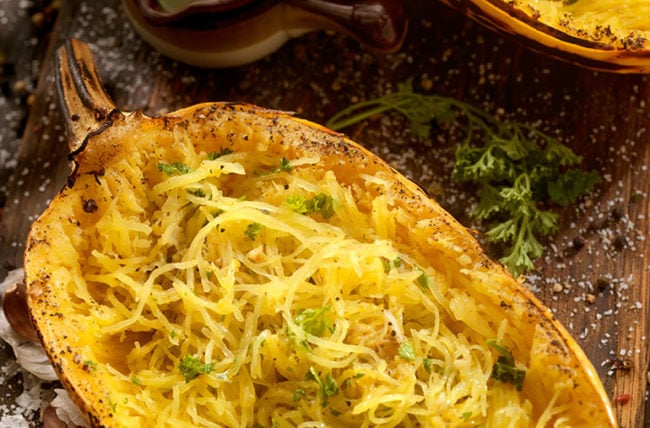 When it comes to eating healthy, it may seem hard to find foods you can get year-round that have many benefits, few downsides and a lot of versatility. But the spaghetti squash is one such food.

While hearing about spaghetti squash may put you in the frame of mind for pasta, rest assured it’s in the same family as other winter squashes and can be used in a variety of dishes. To get the low-down on everything about this wonderful food, we spoke to registered dietitian Beth Czerwony, RD.

What is spaghetti squash?

A gourd, like pumpkins and other squashes, the spaghetti squash is a large, yellow, melon-shaped food that’s usually harvested in early fall but can be found in grocery stores at just about any time of year.

Because of the way the flesh inside the squash shreds into long strands, it’s often used as a healthier substitute for spaghetti — hence the name. These “noodles” can be used in a pasta dish or in a variety of other ways.

How long can you store spaghetti squash?

Its tough, thick skin means it’s hard to tell if it’s “ripe” or not but that’s not really an issue, says Czerwony. “If you plan on cooking it as soon as you buy it, you don’t need to worry about letting it ripen on the counter,” she says. “And it’s a hearty winter vegetable so, theoretically, as long as you keep it in a cool, dry spot, it could last a few weeks before you cook it.”

The only thing you should keep an eye out for is bruising. “The skin is a little bit thinner than a pumpkin, so if you get some bruising, that could result in soft spots. You can cut around those for cooking, but just be aware it’s possible,” she says.

The health benefits of spaghetti squash

Like other members of the squash family, the spaghetti squash is high in vitamins and nutritional value. “You’re getting tons of vitamin C, vitamin B6, betacarotene and fiber,” Czerwony says.

It also has antioxidants, which Czerwony notes are especially helpful for other reasons. “We talk about free radicals from the polluted air we take in and the damage they can do to your body. But these antioxidants fight them and break them down,” she says.

On top of these benefits, spaghetti squash is both filling and low in calories. “A cup is a pretty good serving and that’s only about 40 calories,” Czerwony says. “It’s really a great way to cut calories from your meal without sacrificing that mouthfeel you’re looking for.”

Additionally, because spaghetti squash is high in fiber and low in carbs, Czerwony says, it won’t mess with your blood sugar the same way high-carb foods —particularly semolina pasta — can.

Does the spaghetti squash have any downsides?

According to Czerwony, the only real downside of the spaghetti squash is if you have an allergy. “Unless you have an allergy, it’s high in fiber and essential vitamins while being low in calories and carbs,” she says. “It’s a winner.”

How to prepare and cook spaghetti squash

Now that you know how good spaghetti squash is for you, how do you actually cook this big gourd sitting on your counter?

“The most important thing to remember is that you have to cook it thoroughly,” Czerwony says. “It’s heavy and thick, so you’ll have to roast or steam it for a while to really soften it up.”

Because the edible part of the spaghetti squash is inside that hard exterior, you’ll need to cut the squash in half eventually. Since that can be quite a battle, even with a good, sharp knife, Czerwony recommends cooking the squash first.

“You can certainly try to cut it open before you cook it, but because that outer layer is so thick, it can be very tough to cut open. You might wind up cutting yourself or even hacking the squash a bit too much,” she says.

Follow these step-by-step instructions for the perfect spaghetti squash:

“Because the skin is so thin, you get a lot out of the squash,” Czerwony says. “And the seeds are edible, too. You can rinse them off and then roast them in a few ways, like pumpkin seeds. There’s not a lot of waste.”

Again, though, just be sure it’s fully cooked. “Even if you’ve roasted it whole for a while, make sure the flesh inside is still fully cooked,” Czerwony says. “You’ll be able to tell because the flesh will be hard to shred if it’s not.”

Here are a few spaghetti squash recipes to get you started.

Since spaghetti squash is typically used to replace noodles, this is a good first recipe if you’ve never sampled the squash before. Just sub in the shredded noodles for your traditional pasta.

If you want to up your pasta-replacement game a bit, this recipe adds some healthy vegetable flavor to the mix along with pine nuts for extra crunch.

Replacing noodles with spaghetti squash is a great option across many different types of recipes, including this Asian cuisine favorite.

The Benefits of Cinnamon Everything to Know About Spaghetti Squash

There’s a lot to love about the versatile spaghetti squash, from its health benefits to some great recipes.