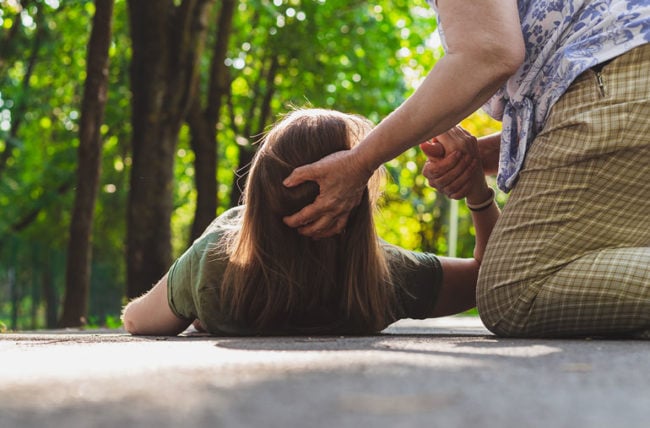 We’ve all seen the movies where someone faints after hearing shocking news. But did you know that it’s so common that it occurs in about one-third of the general population? Besides hearing some shocking news, there are a number of different things that can cause someone to pass out.

It can start with a feeling of dizziness, followed by narrowed vision, muffled sense of hearing — until you wake up somewhere unexpected, like the floor, wondering what happened.

“Syncope — the medical term for fainting —​ is defined as a temporary loss of consciousness and muscle control caused by low blood flow to the brain,” says pediatric cardiologist Peter Aziz, MD. “To put it more simply, fainting can occur when your blood pressure or heart rate drops suddenly.”

It’s not considered a disease itself, but rather it’s a sign or a symptom that can potentially point to an underlying condition. Although rare, fainting can be a precursor of a life-threatening illness, like a heart disorder. That’s why patients who suffer fainting spells should be evaluated promptly by a physician.

When passing out isn’t a concern

The most common cause of fainting is what physicians call vasovagal syncope.

“It happens as a result of a fascinating chain of reactions in the body,” explains Dr. Aziz. “It can occur when your body overreacts to certain triggers, with changes in vessel tone and blood pressure, as mediated by the brain.”

These can include prolonged standing, dehydration, the sight of blood, emotional trauma, stress, having blood drawn, fear of bodily injury, straining — like having a bowel movement — and even hair combing.

These swooning signs provide comfort to doctors because often, they suggest the cause of fainting is nothing to worry about.

Although vasovagal syncope is typically harmless and requires no treatment, your doctor may instruct you to increase your fluid and salt intake, as well as sit or lie flat if these symptoms occur.

When should I worry about fainting?

While occasional fainting is harmless, if you’re older and have certain risk factors, more than one episode of fainting could signal a dangerous problem with your heart. Fainting, when associated with exercise or exertion, shouldn’t be taken lightly, either. Typically in a benign fainting spell, someone will have some recall just prior to passing out.

But when someone has no memory of the event whatsoever, it can suggest than an arrhythmia was the culprit.

Your doctor will test your heart’s electrical system with an electrocardiogram in the office. They’ll also ask questions about your family members, since family history can help provide deeper clues as to whether or not passing out is harmless (benign) or a bigger problem.

“Your doctor will often ask if anyone in the family experiences or has experienced passing out spells, seizures, sudden unexplained death (like drowning), single car accidents or heart attacks at a young age,” says Dr. Aziz.

All these seemingly weird questions can suggest a life-threatening arrhythmia may run in the family.

People over age 60 are more likely to faint for heart-related reasons than those who are younger. For example, it’s not unusual to take too much blood pressure medicine, which makes your pressure drop too low. Once the dose is adjusted, you should stop passing out.

Of much greater concern is fainting caused by episodes of a slow or fast rate. The most dangerous is a heart rhythm disturbance called ventricular tachycardia, or ventricular fibrillation (V-Fib).

In V-Fib, your heart fibrillates (races away in a disorganized fashion). After four to five seconds, you lose consciousness, stop breathing and have no pulse. This is called sudden cardiac arrest.

Sudden cardiac arrest is the most common single cause of death in our country. It’s vital to know whether you have any of these risk factors for it:

If you do have any of these risk factors, tell your cardiologist promptly about these fainting spells. If you are found to be at risk of V-Fib, or of having a sudden cardiac arrest episode, an implantable cardioverter-defibrillator (ICD) can save your life. Whenever an episode occurs, the ICD will automatically restore normal heart rhythm — within seconds.

Why fainting is more concerning in the summer

During the summer when temperatures are hot, outdoor activities are more abundant and fainting can occur more frequently due to overheating and dehydration.

“It’s important to stay vigilant and be prepared in case this happens to someone you know,” says Dr. Aziz. “Although benign fainting spells are brief and sufferers come back to their own within 10 to 15 seconds, they can still injure themselves during the event.”

If you see someone faint, don’t just stand there. Check to see if they’re conscious, and if they’re not, call 911 immediately and start administering CPR.

Despite the fact that fainting is fairly common and most instances are nothing to worry about, being attentive and aware of this topic — especially during the sizzling summer months — can potentially help save a life.​

Does Your Heart Stop When You Sneeze?

How Dangerous Is Fainting?

Why You Get Dizzy When You Stand Up Quickly or Exercise 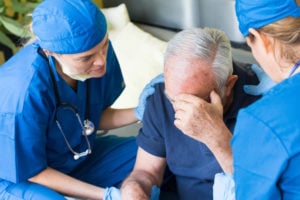 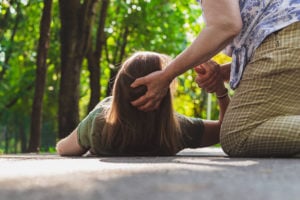 What Exactly Is a Fainting Spell and When Should You Worry?

As scary as it may be, fainting – also known as syncope – is actually very common. It occurs in about one-third of the general population, and there are a number of different things that can cause someone to pass out.