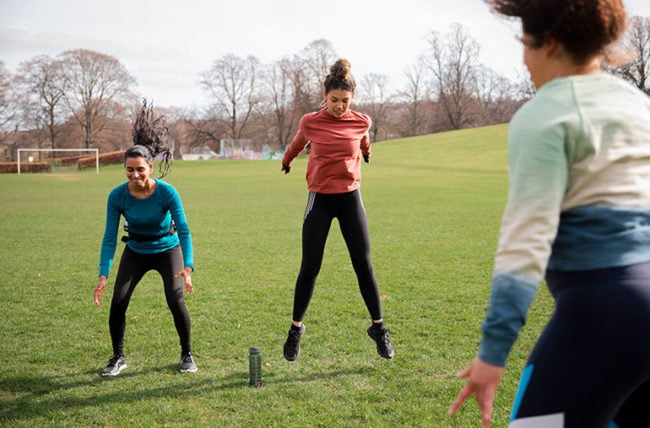 A burpee sounds like something that should be silly. It isn’t.

Burpees are brutally efficient as a workout tool, meshing cardio and strength training into an extremely high-intensity package. In seven simple movements, the exercise works your body from top to bottom.

So, let’s get started.

The benefits of burpees

The toughest exercises check a lot of workout boxes. Burpees certainly do.

From an aerobic standpoint, burpees put your ticker to the test. The exercise offers the breath-stealing effect of running in a very condensed timeframe. (Nykor recommends keeping burpee sessions between 30 seconds to 90 seconds.)

“You’re going to feel huge peaks in heart rate — and it’s going to happen quickly, given the intensity of the exercise,” explains Nykor. “You’re asking your body to use a lot of energy and a lot of oxygen.”

But there’s also a strength, or anaerobic, side to burpees.

Movements within the exercise mesh resistance training with explosive muscle action. A burpee targets your arms, chest and shoulders. It’ll work your abs and tax your leg muscles, hips and gluteus maximus, too.

“It’s all-encompassing,” says Nykor. “You’re working everything below the top of your head.”

How to do burpees

Burpees require no equipment and a limited amount of space. Best of all, the exercise can be broken down into seven simple and familiar movements. “There’s nothing particularly tricky about it,” encourages Nykor.

Here are step-by-step instructions. (Warm-up before starting, too.)

There are two positions — a squat and high plank — that you reach twice while doing burpees. That makes using proper form doubly important for those steps, stresses Nykor. Let’s look deeper at each.

The instructions above outline your run-of-the-mill burpee. That’s not quite tough enough for some exercise innovators, though. “Modifications to the routine can help keep things fresh,” says Nykor.

Examples include using a weighted vest, which can put your muscles to an even greater test, or slipping another movement into the flow of the exercise.

Search online for a seemingly endless array of burpee variations, including some that utilize equipment such as a box or a pullup bar. (A quick note: Many of these modified exercises are more advanced.)

Can you make a burpee easier?

Absolutely, says Nykor. If doing a regular burpee is more demanding than your current fitness level, make adjustments. Maybe that means not doing the jump at the end. Or not doing the push-up.

“Do the exercise to your abilities,” advises Nykor. “It’s OK to make changes to burpees to make them more accessible.”

Should some people avoid burpees?

Given the intensity level of the exercise, burpees aren’t ideal for everyone, says Nykor.

The heart rate spike may be a concern if you have a heart condition. Nykor recommends getting approval from your doctor or cardiologist before trying the exercise if you’ve had a cardiac event.

People with back or hip injuries also may want to avoid the exercise. Ditto for those with shoulder issues, such as a torn rotator cuff.

A fitness innovator named Royal H. Burpee mapped out the exercise in 1939 as a quick-and-simple way to assess a person’s fitness. He developed it as part of his PhD thesis at Columbia University. (He passed, of course.)

A few years later, the U.S. military used Burpee’s exercise to assess new soldiers and gauge whether they could handle the physical rigors of combat.

And while the exercise is usually done in short bursts, some go for the long haul. The Guinness World Record for most burpees in 24 hours is 12,003 by an Australian woman named Eva Clarke. (The male record is 10,815.)

How To Do Leg Lifts Properly: A Step-by-Step Guide

Why a Strong Core Can Help Reduce Low Back Pain

Why Senior Mobility Is so Important Right Now

Try These Ab Workouts to Strengthen Your Core 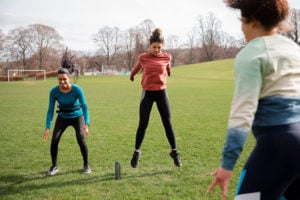 How to Correctly Do a Burpee: Step-by-Step Instructions

Burpees are a tough and physically demanding exercise that can be done in seven simple steps. An exercise physiologist explains why it’s worth the effort.