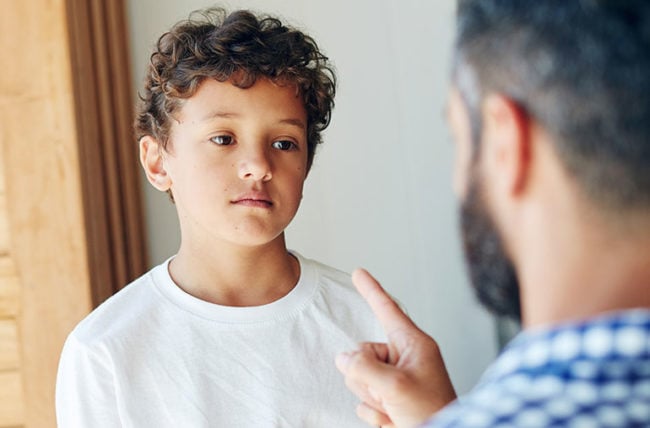 All kids fib from time to time. But when your child tells a whopper, should you punish him, making sure he knows — in no uncertain terms — that lying isn’t ever acceptable?

No, says psychologist Kristen Eastman, PsyD. As a parent, you’re playing the long game. You want to keep the lines of communication open.

Parents should expect kids to lie at some point and try to resist the urge to simply get upset (and punish).

“It’s an opportunity to figure out why they felt lying was their only option,” Dr. Eastman explains. “At different times, you can identify what underlying skill they are lacking — whether that’s problem-solving or social skills to connect with peers.”

If you freak out, it can make your child less likely to trust you and open up about sticky situations in the future. This holds true no matter your child’s age.

Here, Dr. Eastman breaks down why kids lie and how to handle it, from toddlers to teenagers.

How to handle lying in toddlers (ages 2-3)

Lying is common in young children, who are just beginning to understand the difference between fantasy and reality.

Take a common scenario: Your daughter sneaks a chocolate chip cookie. The telltale chocolate smear is on her face. When you question her, she denies it. Why?

Children this age are too young to understand lying as a moral choice. They don’t always think before acting, so they don’t anticipate consequences. So, the lie is how they’re responding to the fact that you look mad or sound upset. They want to make everything OK again. They’re not trying to deceive.

With toddlers, respond to lies with facts. Don’t punish. In this instance, point out her dirty face and the open package on the table. When you lay out the evidence in simple but concrete terms, you can start to help your child understand right from wrong.

How to handle lying during the preschool years (ages 4-5)

Talk with a slightly older child about the importance of telling the truth.

For extra reinforcement, read an age-appropriate book about lying to your child. And make sure to set a good example by telling the truth yourself.

If you catch your preschooler in a lie, don’t make a big deal out of it — they are still exploring and testing at that age. Make use of their increased language skills to teach them about choices.

“Say that lying’s not an OK choice, but here’s how you could have handled that instead,” Dr. Eastman advises. “You still need to be very concrete at this age.”

How to handle lying during the elementary school years

By the time your child enters kindergarten, she’s a bit more savvy. She understands that lying is wrong, but she also knows that lying can help her avoid consequences and chores. She’d rather have fun than do her science project or clean her room. She’ll lie to mislead or manipulate and to avoid an uncomfortable situation. At this age, skill building — not punishment — should be the goal.

“Kids usually want to do the right thing,” Dr. Eastman says. “But when they lack skills to handle a situation, they just choose the path of least resistance.

“If your child lies about not having homework, find out why. Maybe they don’t understand or can’t keep track of their assignments.”

Pinpoint what’s behind the lie, whether it’s a lack of problem-solving skills or a feeling of not fitting in. Focus on teaching your child how to solve problems, get through uncomfortable situations and think ahead to consequences for their behavior.

“Look at the gaps in your child’s skills as an opportunity to reduce the need to lie,” Dr. Eastman says. Share experiences from your past instead of punishing and shaming.

But don’t let them get away with it, she notes. Tell them it’s not OK, or they’ll see lying as an easier way to avoid consequences or hurt feelings.

Modeling is even more important at this age. “If you lie in everyday situations — “I wish I could talk, but I have to get going. I have somewhere to be” — older school kids will start to notice that and think it’s OK.”

How to handle lying during the middle school years and beyond

During the middle school years, your child is even more likely to lie to fit in with peers, to get out of trouble or to regain control after you’ve told them no. Help him understand the impact of his choices.

“Explain to older kids and teens why lying can lead to dangerous consequences. Often, they’re not thinking ahead,” says Dr. Eastman. For instance, if your son lies about where he is, help him understand that you couldn’t get in touch with him if something went wrong. Helping him see why limits are put in place will eventually help him make better choices.

“Parents need to talk with their child, explaining their concerns (whether moral or safety issues) and perhaps finding a compromise,” Dr. Eastman says. “This isn’t giving in. This is helping ensure you’re not seen as overly strict, which could just result in more lying.”

Older kids start to understand when it’s OK to tell a ‘white lie’ to spare someone’s feelings. Dr. Eastman says it’s best to reinforce the importance of telling the truth, though there are some times when it’s better to keep your thoughts to yourself.

You can also help them understand that lying can affect their reputation. “Discuss questions like ‘How do you want others to view you? How do you want to view yourself? Do you feel proud of yourself when you lie, or rather when you’re honest and kind?’” she suggests.

Bonus tips: Share your own experiences and reward honesty

Everyone makes mistakes or mishandles a situation once or twice.

But talk to your child about how if this becomes a repeated thing, there will be consequences. And lay those out up front, so there’s no debate about it later.

Share some of your own experiences and talk about the mistakes that you have made, she adds.

And don’t forget to offer positive rewards when your child tells the truth, especially in a tough situation.

If you follow Dr. Eastman’s advice but worry that your child’s lying is becoming too automatic, ask your child’s pediatrician for help.

Ways to Help Your Child Make Friends in School

5 Tips To Help Your Child With Back-to-School Anxiety

Sore Loser? How to Help Your Child Handle Disappointment

Is It OK to Have an Imaginary Friend? 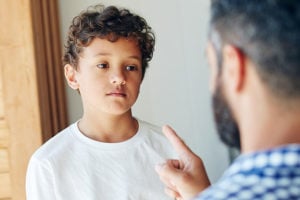 How to Handle Your Child’s Lying at Every Age

Why do children lie? What’s the best way to respond if you catch your child lying? A psychologist answers these questions and more.