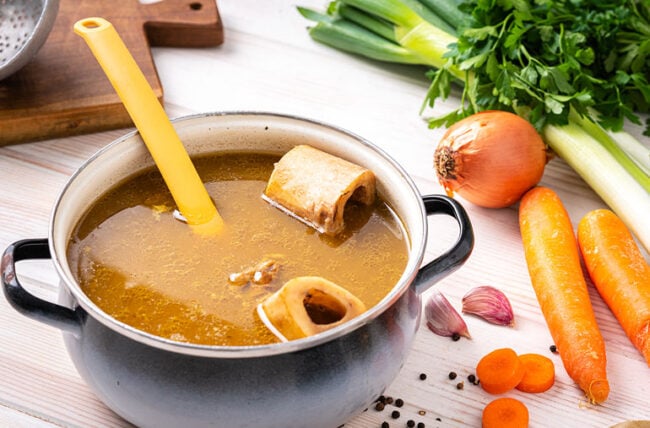 Most food trends are a flash in the pan. Anybody remember cronuts? Activated charcoal everything? Bacon-wrapped bacon on bacon, with a side of bacon? Most food fads only survive a few years before being relegated to the walk-in pantry of history. But every once in a while, a food trend becomes a staple.

Popularized in part by the paleo diet, bone broth has been “having a moment” in the United States for several years now. And unlike some of the sexier food fads, its popularity isn’t waning. That’s probably because we’re the ones who are late to the party — bone broth has always been a staple of Asian cooking.

So, what exactly is bone broth, and is it really better than soup stock?

The primary difference between bone broth and stock are the ingredients and cook time, says registered dietitian Anthony DiMarino, RD.

A standard stock uses meat, bones, water, seasoning and, sometimes, a mirepoix. A mirepoix is a mix of aromatics like chopped onions, carrots and celery that gives your stock an added depth of flavor. Most stocks use beef, chicken or fish as a base, but don’t despair, vegetarians! It’s just as easy to buy or make vegetable stock.

If you’re in the mood to DIY, making stock is about as easy as it gets. You just add your ingredients into a pot and let them simmer. All told, it takes between two and three hours on a stovetop to make a decent stock — even less if you’re using a pressure cooker.

Bone broth uses similar ingredients and requires minimal prep, but it’s much more time-intensive. According to DiMarino, bone broth should simmer for a minimum of six hours. Really high-quality bone broth spends 24+ hours on the stove. While you may want to dress your broth up with some herbs and spices, and — if you fancy it — a mirepoix, it’s not required.

All that extra time on the stove pulls nutrients out of the bones, rendering the broth thicker, healthier and more gelatinous than a stock.

While frequently used as an ingredient in soups and other dishes, both stock and bone broth are also sippable by themselves. The latter is increasingly popular on restaurant menus.

According to DiMarino, the collagen content in bone broth is what makes it worth the extra prep time. Our bodies produce collagen naturally, but the amount we create diminishes as we age.

“As we consume that collagen,” he explains, “we break it down. Our body can then use those amino acids for a number of reasons. Basically, the body’s going to use it where it needs to use it.”

While there isn’t a tremendous amount of research on bone broth, its nutrition profile suggests a wide range of possible health benefits, including:

Collagen has long been touted as a natural way to strengthen skin elasticity, thereby reducing signs of aging like wrinkles and crepey skin.

The lining of our gastrointestinal (GI) tract thins over time. There’s some evidence that boosting collagen production also helps restore that lining.

As many of us are all too aware, as we age, our joints lose elasticity, resulting in osteoarthritis. A collagen boost can help reduce joint pain by protecting your tendons and ligaments.

Collagen is one of the primary components of both our bones and our muscles. They weaken as we lose collagen, which raises the risk of osteoporosis and sarcopenia.

Extensive as the list of health benefits associated with bone broth may be, remember, there’s still not much research on the stuff. The research that does exist makes clear that not all bone broths are created equal. Homemade or café-made bone broths are the most reliable, but even they vary in nutritional quality from batch to batch.

If you’re buying bone broth from a grocery store, keep in mind that companies can label their broth “bone broth” as long as they used bones to make it — even if the broth and bones only cooked together for a few minutes. A quality bone broth should cook with bones for at least six hours.

So, how do you know if you’re buying high-quality bone broth? When refrigerated, it should take on a gel-like texture. That’s how you know there’s collagen, amino acids and other nutrients in the mix. Also, look in the freezer section; bone broth remains intact during the freezing process, and can stay good for anywhere from 12 to 24 months, depending on the brand and preparation.

If none of those options appeal to you, you can also purchase powder or supplement forms such as collagen peptides or bone broth powders, which offer the same nutrients.

How to make bone broth

DiMarino suggests making your own bone broth or purchasing it from a local vendor, rather than purchasing pre-made or store-bought options. If you want to give it a go yourself, we recommend slow cooker bone broth using beef, venison or poultry bones. You can also try Thai coconut bone broth with hot chilies, lemongrass and ginger.

He’s also quick to point out, though, that — while it’s good for you — making bone broth requires a good bit of money and even more time.

DiMarino describes bone broth as a luxury. “It’s a ’nice to have,’ it’s not a ‘need to have,’” adding that, “If it’s something you enjoy and you want to make it at home — like if it’s a hobby — and you have the time and the resources, go for it. But if it doesn’t fit your schedule or your budget, don’t worry about it.”

No bones about it

Eventually, the hype around bone broth will die down, either because it fully integrates into U.S. food culture or because — like quinoa and açaí before it — it becomes the province of health-conscious foodies with a taste for international cuisine.

Either way, its health benefits stand.

“Bone broth is a quality addition to a well-rounded, healthy diet. It’s never going to be a silver bullet, but you can add it to your food rotation without having too many concerns,” DiMarino says.

If only we could say the same about our dearly departed friend, the cronut.

Bone Broth: How to Make It — and Why You Should

The Best Way You Can Get More Collagen

What Is the Alkaline Diet, and Is It Safe?

Here’s How Menopause Affects Your Skin and Hair 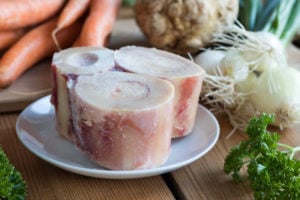 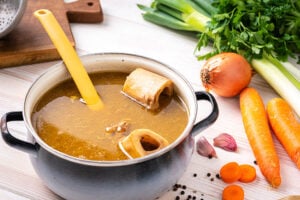 Bone Broth vs. Stock: Which Is Better?

Bone broth is healthier than stock, but what’s the difference and is it worth the investment of time and cash? We talked to a dietitian to find out.