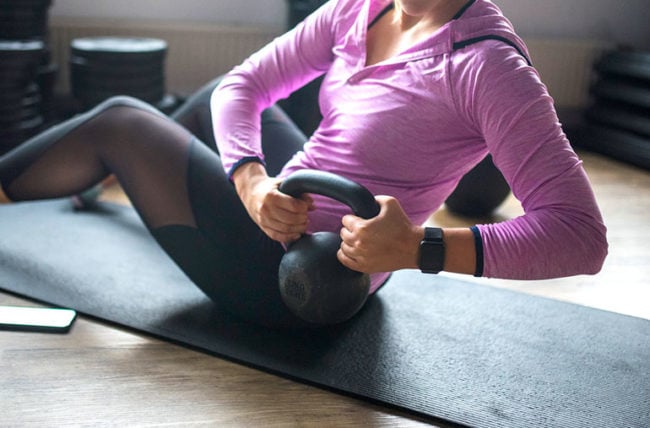 When shelter in place orders forced us to stay home, many people created or reopened their home gyms. Treadmills and elliptical machines were no longer clothes drying racks and guest rooms were filled with weights, yoga mats or the latest fitness infomercial sensation. Sales numbers confirm this as well. According to the NPD Group, a consumer data company, there was a 130% increase in fitness equipment sales and all of its categories in March alone.

Kettlebells became must-haves for quarantine home gyms. According to eBay, kettlebells were the third most in-demand pieces of fitness equipment during the lockdown and sales of them increased by 1000% between 2019 and 2020.

What is a kettlebell?

Kettlebells aren’t new. These cannonball-looking weights with handles have been around at least since the 1700s and some even believe they were used in ancient Greece. Kettlebell training became quite popular in Russia and Germany during the 18th and 19th centuries. Farmers, strongmen and even the Russian army used them for training and other feats of strength.

It’s believed that kettlebell workouts made their way to the U.S. in the late 19th century and were prominent until the 1950s. While their appeal may have faded here, Russians fully embraced kettlebells because they offered an effective workout in a small space.

The resurgence of kettlebell training in the US

Kettlebell workouts started to become popular again in the U.S. during the early 2000s. Some people credit the resurgence to Belarusian Pavel Tsatsouline, a former trainer of Soviet Special Forces soldiers and subject matter expert to the U.S. Marine Corps, Secret Service and the Navy SEALs. But it’s also been noted that a number of ex-Soviet kettlebell athletes who fled to the U.S. after the fall of the Berlin Wall were instrumental in putting this form of training on the radar again.

Kettlebells are made out of cast iron or steel, but you can find options filled with sand or ones that can be filled with water. And they don’t just come in one weight. Kettlebells can range from five to well over 200 pounds.

But can anyone do kettlebell training and should you attempt to use one or more without guidance from a trainer? We’ll explore this strength conditioning option and get the basics from physical therapist Tyler Hewett.

If you’re not a creature of habit and you really enjoy mixing things up when you work out, kettlebell training can offer a number of benefits. “Kettlebells give people more variety in their workouts and offer different variations of body mechanics that allow muscle groups that haven’t been previously targeted to be isolated and challenged,” says Hewett.

Besides kettlebells, what else do you need to train?

Hewett recommends having a safe non-slip surface such as a yoga mat for any sort of dynamic movement during training. “Beyond that, the good thing about kettlebells is that they are more than capable of being your entire workout for the day.” Hewett says.

Is it safe to try kettlebells at home alone or should you seek the advice of a certified trainer?

If you work out regularly, Hewett says that trying a basic kettlebell workout at home shouldn’t be a problem. If you’re new to all of it, consider getting proper guidance from a certified trainer.

“If you are used to working out and are aware of proper mechanics, I recommend starting at home with lighter kettlebells. If you’re new to working out, it’s definitely a good idea to seek the advice of a certified trainer to prevent injury as well as get an established idea of what is a good challenge for you,” says Hewett.

Where do people tend to go wrong with kettlebells?

According to Hewett, many people make the mistake of starting their training without learning the proper form for exercises or they don’t pick the right size kettlebells. “Inexperienced people will enter a workout with one kettlebell and think it is a one-size-fits-all type of deal. This is not the case. Kettlebells can be used in many different ways so you need a variety of weights based on the movements in your workout. Also, using the wrong kettlebell weight can cause compensations or muscular imbalances, which can then lead to injuries. It’s always a good idea to master the form and mechanics of each exercise in your set rather than jumping into them with too much weight.”

What’s the best way to get started with kettlebell training and how often should you train?

If you’re working out at home and want to incorporate kettlebell training into your routine, don’t start by grabbing a kettlebell and swinging away. Hewett recommends watching videos on how to do each movement. Then, practice the movements slowly and without weight to establish proper mechanics. Once you feel comfortable, gradually add weight. Start with kettlebells that are at a lighter weight (but not at a level where the exercises are super easy) and work your way up to a heavier weight that you can tolerate.

As for how often you should train, Hewett suggests training two to three times a week. And to make the most of your workout, be sure that you’re not isolating particular muscle groups. You’ll want to do compound exercises or movements that involve multiple muscle groups.

Is swinging the kettlebell the ultimate goal or can you do other things to get an effective workout?

There is a huge variety of movements you can do with kettlebells, ranging from upper body movements, squat variations and so much more than just swings. You can break a kettlebell workout down into basic movements such as shoulder presses, bicep curls, deadlifts and more.  Once you feel more comfortable, you can add in dynamic, rigorous exercises such as swings and snatches. Hewett stresses that the movements in your workout sets should always line up with your experience level.

“A more experienced athlete is most likely familiar with different movements so they might be able to pick up a kettlebell workout quickly. On the other hand, a beginner would benefit from working with a trainer to understand the exercises and develop proper mechanics. But even if you are experienced, there’s nothing wrong with having a trainer critique your form to help ensure that you’re doing things the right way so you don’t injure yourself down the road.”

Can anyone do kettlebell training?

“As long as it is done properly — and when I say ‘done properly,’ I emphasize using the right kettlebell weights and mechanics — kettlebell training is safe for most people to try. If you have pain or are pregnant, you’ll want to find a different option for strength training,” says Hewett.

Hewett adds that osteoporotic patients might be able to try kettlebell workouts with certain modifications added to prevent fractures.

“It’s OK for people with arthritis in their back or knees to try kettlebell training as long as they have the proper form and mechanics down. Foundational strength is also important, too. That means having the ability to do basic exercises (such as a straight leg raise, squat, etc.) without pain. If you’re not sure if you should try kettlebell training, it’s a good idea to see a medical professional or certified trainer first before beginning this workout. When exercising you always want to be pain-free,” says Hewett.

How to Start a Barbell Training Program

How to Exercise at Home During the COVID-19 Pandemic (Yes, It’s Possible!)

How to Create a Home Gym You’ll Actually Use

Treadmill or Elliptical? How to Decide What’s Your Best Workout

Is Kettlebell Training Right For You?

Curious about kettlebell training? Learn if it’s right for you and the best way to get started from a physical therapist.