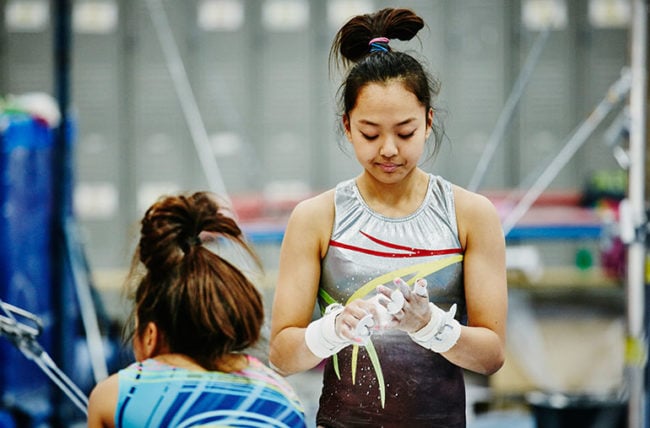 Nobody questions an athlete taking time to recover from a sprained ankle or broken wrist. Those injuries are easy to see and come with a clear understanding that they cannot be ignored.

But what about when athletes need to step away to tend to their mental health needs?

Depression and anxiety are not diagnoses evident on an X-ray or MRI, but they can be every bit as limiting or debilitating as a physical injury. Too often, however, these issues are ignored in the name of grit.

A national conversation on the issue has begun, though – and rightfully so, says sports psychologist Matthew Sacco, PhD. Let’s talk about why.

Athletes often carry a larger-than-life persona in the public eye. They’re regarded as modern-day warriors, competitors who bravely push past obstacles and adversity in the pursuit of victory.

But they’re something else, too: “Athletes are people,” says Dr. Sacco.

As such, they’re going to wrestle with the same complex issues as the rest of us. They’re not immune to the stresses of life. A 2016 study found that college athletes reported symptoms of depression at a similar rate to the general student population.

Asking for help, though, can carry a stigma for athletes, notes Dr. Sacco. “Because if you’re tough, there’s a misconception that you should be able to just do it yourself. You don’t have to get help.”

And that idea, he says, only creates bigger problems as time goes by.

The stress of athletics and competition

Stress isn’t unique to athletics, but the unique culture of sports can serve as a pressure cooker. The aggressive environment within locker rooms often preys on any perception of weakness, says Dr. Sacco.

Then add in the perfectionist mindset of many competitors. It’s a powerful force, but that drive can also leave athletes feeling unsatisfied no matter how well they perform.

Finding a healthy balance in this cauldron can be difficult. “As you work your way up the level of competition, it turns the heat up on some of these factors — and they can become a little bit more pronounced depending on the person,” notes Dr. Sacco.

Many athletes won’t actively seek mental health help when they need it. Instead, somebody — maybe a coach or parent — might notice that “something seems off” and encourage them to talk about it.

Signs that an athlete may need an assessment of their mental health include:

“How do we measure someone who might be struggling with depression in a way that people can see, like an X-Ray for a broken bone?” asks Dr. Sacco. “We’re looking at things that seem like side issues but might be connected to a whole host of deeper matters.”

So how much can a mental health matter affect an athlete’s performance? “I think at a very basic level it’s a distraction,” says Dr. Sacco. “At the very minimum, if your mind is full of other things, then it can just be a distraction.”

These distractions can become magnified as stakes rise and competitions carry a higher sense of importance, bringing with it an increased pressure to perform.

Sometimes, a change in an athlete’s mental state may just result in a poor score or performance. For example, a baseball player who suddenly can’t throw or a golfer who develops the “yips” while putting.

Other times, a distracted mind could be dangerous — such as when a gymnast is flipping through the air or a downhill skier is swooshing down a slope. “That lack of focus can be quite catastrophic,” says Dr. Sacco.

In any of these cases, though, Dr. Sacco says athletes deserve time to sort things out — even if that means sitting on the sidelines for a bit.

“I think as onlookers, we see it from this kind of armchair standpoint where we think we can understand it, and the athlete should just be able to figure this out,” says Dr. Sacco. “And I think that really lacks any kind of real awareness of what’s really going on.”

In today’s win-at-all-cost world, a competitor shutting down to deal with a mental health concern can bring unwanted labels such as “quitter.” Worries about that serve as an enormous obstacle to athletes getting the care they need.

The solution? Open conversation and an acknowledgment that mental health needs to be a priority, says Dr. Sacco.

Prominent athletes sharing their experiences has drawn more attention to the topic in recent years. The ongoing discussion started by these influential voices has broadened our understanding of mental health issues.

For young athletes, in particular, starting this conversation is critical to building a culture where it’s OK to talk about the mental health aspect of competition.

“We need to lead by example,” says Dr. Sacco. “I think we need to take into consideration that just because something was done a certain way in the past, that doesn’t mean it’s the most appropriate or best approach.”

Tips for parents of young athletes

For years, the advice regarding mental health issues could essentially be boiled down to four words: Just push through it. That’s not guidance that resolves an issue.

If you’re a parent with a young athlete in your house, encourage them to talk, advises Dr. Sacco. Then make sure you listen with an open mind. Focus on understanding their situation, not on making your point.

“Give them a voice,” Dr. Sacco says. “Make sure they feel heard so that we’re not continuing a cycle of ignoring these issues. Don’t be afraid to bring up the issue. The risk of not addressing this is far greater in the long run.”

How to Find a Therapist

Stressed About the Elections? 5 Tips to Get You Through

How to Mentally Come Back From a Sports Injury

Talking to Yourself: Is It Normal?

Nobody questions an athlete taking time to recover from a sprained ankle or broken wrist. But what about when athletes need to step away to tend to their mental health needs? Examine the issue with a sports psychologist at Cleveland Clinic.