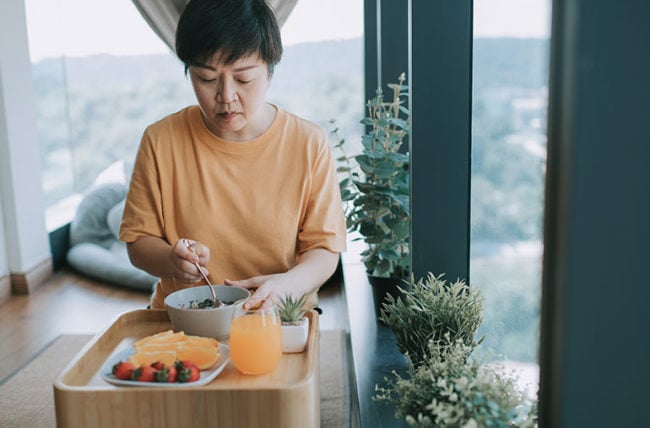 When you’re on the couch binge-watching a TV show, chances are you’re doing something else at the same time — like reading a book, scrolling on your phone or munching on snacks.

Eating while doing something else can lead to unhealthy habits, though. “We’re not focusing on what we’re eating and how the food tastes or savoring our foods,” says dietitian Maxine Smith, RD, LD.

Yet this kind of idle noshing is common. “Mindless eating is quite easy to do. Food is such a part of everyday life and is so readily accessible,” notes Smith.

But when done on a regular basis, mindless eating just isn’t a good habit. You might consume more unhealthy food than you realize, or get into the habit of eating when you aren’t even hungry.

Embracing a practice known as mindful eating can get you back on track.

What is mindful eating?

Smith says the concept of mindful eating evolved out of mindfulness theory and practices, which encourages people to slow down, live in the moment and pay attention to their actions.

“Mindful eating focuses on the why and the how of eating, versus what’s promoted by many diets, which are more what to eat, how much to eat, maybe even when to eat,” Smith says, “It’s much more of an internal versus external approach to eating.”

Mindful eating is rooted in being thoughtful and analyzing your choices. “Part of mindful eating is to consider the why — what is my intention for eating?” Smith explains. This kind of contemplation is important because it leads to more deliberate — and personalized — food choices.

Learning how to eat mindfully also reflects a shift in perspective. “It’s a very empowering approach versus a deprivation approach,” Smith says. “You’re regaining control over food rather than letting it take control of you.”

The benefits of mindful eating

In general, mindful eating leads us to pick more nutritious foods, which has the added bonus of improving our overall eating habits. But embracing mindful eating techniques has multiple benefits beyond just good health.

Promotes better enjoyment of — and appreciation for — food

Remember how good your first taste of ice cream is each summer? Mindful eating can give you that positive feeling year-round — and, as an added bonus, you can achieve satisfaction through smaller portions.

“One of the biggest benefits of practicing mindful eating is that we actually enjoy food more, but in smaller amounts,” Smith says. “If you learn to savor foods, and engage with all of its different sensory aspects, you’ll be satisfied with a kiddie cone versus a double scoop ice cream cone.”

As an added bonus, mindful eating practices can also help you have more gratitude for the food on your table. “The practices include focusing on an appreciation for food and where it came from, as well as appreciating everybody that helped produce that food,” Smith says. “You’ll also develop a sense of thankfulness for all the ways that it’s benefiting our bodies, so you have a more positive appreciation for food.”

Smith describes the practice of mindful eating as being like “reformatting the hard drive of your brain. You’ll start responding differently to different eating cues.” For example, you might notice you’re letting go of unhealthy food cravings and, instead, forming new, healthy ones.

Your mouth contains enzymes that help you start digesting food while you’re chewing. When you’re mindfully eating, you’re encouraged to eat more slowly and chew your foods thoroughly. As a result, you digest food earlier — and more effectively. “If someone has digestion problems, eating more slowly can immensely help with that,” Smith says. “A lot of mindful eating practices include chewing foods well, which also helps with the digestive processes.”

In the past, you’ve probably started snacking even when you’re full, or eaten so much at dinner you feel uncomfortably stuffed. Mindful eating is a way to get your eating habits back on track by helping you listen better to signs that you’re hungry or full. “Practicing mindful eating guides us when to start and stop eating based on internal cues,” Smith says. “It also helps with emotional eating and disordered eating patterns.” This includes common eating disorders like binge eating, she adds.

Another byproduct of listening to your body’s internal cues is developing better weight management techniques. Instead of measuring your hunger by external measures, such as the amount of food on your plate or calories you’re consuming, you’re relying on what your body is telling you.

“Mindful eating can be extremely freeing,” Smith says. “If we say we’re never going to eat something again, it puts the food on a pedestal and makes it even more desirable,” Smith notes. “But if we incorporate some of that into our eating patterns and eat it mindfully, we might find out, ‘Oh, we’re satisfied with just a little bit of that and it’s not all that enticing as our brain is making it out to be.’”

Have a more positive attitude toward food — and ourselves

Over time, it’s easy to develop an unhealthy relationship with food. Mindful eating helps undo long-held negative habits or attitudes. “Mindful eating is a loving and non-shaming approach to eating,” Smith says. “You’re replacing those dos and don’ts of eating, or applying moral implications to food, with an attitude of exploration and curiosity.”

How to practice mindful eating

Because so much mindful eating involves changing your brain and outlook, there are some concrete steps you can take to begin following mindful eating.

Believe it or not, you can do mindful eating exercises to help get your brain in gear. “We have done classes where a person practices being mindful while they’re eating a particular snack,” Smith says. “They’re tuning out all distractions, paying attention to all the sensory implications and aspects of the food, and practicing savoring it.”

Along with this, developing a non-judgmental approach to what you eat — in other words, food is neither “good” nor “bad” — is key. “You also want to pay attention to how that food may help you feel in the short term,” Smith says. “Does that food provide me with energy, or does it provide me with a strong craving to eat more of that food? But you’re not judging that food as good or bad.”

Change your attitude toward food

Having a positive attitude about eating is also crucial, Smith stresses. “If you have a negative attitude, or if you feel deprived, you are very likely to fail,” she says. “So if you say, ‘I can’t have something to eat,’ catch yourself saying that and change it into a positive statement: ‘I choose not to eat that.’”

Put together a daily food plan

Go into every day with a dedicated food plan that spells out what you want to eat for each meal. Smith says this plan should cover healthy foods, as well as foods that might not be as nutritious. “You can have those occasional indulgences, but they’re planned indulgences,” Smith says. “If you go into the day with a plan, include some of those higher-calorie or less-healthy foods, maybe in smaller amounts or less often.” She adds that this proportion is OK because you can get most of your needed daily nutrients if you’re eating healthfully “about 80%, 85% of the time.”

Just be sure not to put too much pressure on yourself by expecting perfection every day.

“Use that plan more like a GPS,” Smith says. “If we want to get to a place, we’re much more likely to arrive there, and arrive there promptly, if we have that GPS. We may have a few diversions along the way, but the sooner that we get back on track, the better. And having a meal plan going into the day is going to help us get there a lot sooner.”

Between busy work and family schedules, you might find yourself eating only one or two big daily meals instead of spreading out your eating over a full day. “Your stomach can actually become distended (bloated) and then you require more food to have that sense of fullness,” Smith says.

To undo this habit, schedule smaller meals about three hours apart. “These may be a small mini-meal, such as a yogurt and a piece of fruit and a small handful of nuts,” Smith says. “It doesn’t have to be a formal meal. It’s more having something to carry you over, so you don’t go too long without eating and go into the next meal ravenous.” You may need to schedule more of these meals at first until you get used to this routine, or take snacks with you if you know you’re going to be on the go.

Seek out people for accountability

Smith says in-person and virtual support groups are an invaluable way to help keep you accountable as you go through a mindful eating journey. “Nobody better knows what you’re going through than others that are in the same situation,” Smith says. “Others have experienced and practiced strategies that may have been beneficial for them, and they may pass that knowledge on to you.”

The combination of expert and peer support in these groups is also beneficial, she adds. “There’s nothing more important than feeling understood, that somebody else has been in your shoes before. And, believe me, there are a lot of others that are experiencing the exact same things you are.”

How to stick with mindful eating

It can feel overwhelming to try taking on mindful eating practices by yourself. “As I mentioned before, food is everywhere,” Smith says. “Everybody is trying to get us to eat more.” Having a support system cheering you on — a loyal friend or a family member — and supporting what you’re doing can help.

“There are a lot of food pushers out there,” Smith says. “When you take the time to explain to them why you want to make some changes, if you make it very personal, they can often be very supportive.”

That means instead of saying you’re looking to lose weight or alter your appearance, note that mindful eating can also benefit them. “I have found that if you focus on appearance or just weight, you’ll probably not get that much support because they’re going to start comparing themselves to you and saying, ‘Well, you don’t need to lose any weight,’” Smith says. “On the other hand, if you say, ‘Gosh, I really want to have more energy. I’m getting tired early and then I only want to take a nap when I get home from work. I really want to go out with you and have fun,’ you’re providing some benefit for them.”

Suggesting an alternative gift besides food — like weekly flowers from the store instead — can also help.

“People want to show love towards other people through food,” Smith says. “That’s often one of the biggest barriers. A person doesn’t want to say “no,” because that’s almost like rejecting that person’s love toward them. Let them know that if you want to do something special, this is how they can do it.”

Here’s How To Respond to Food Shaming

How to Practice Mindfulness to Improve Your Well-Being

How to Restart Healthy Eating Habits 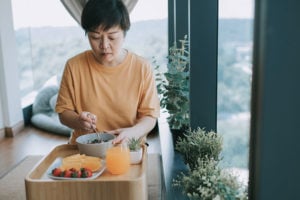 Do you find yourself mindlessly munching on snacks when you’re binge-watching a TV show? Mindful eating can turn that bad habit into a healthy one.