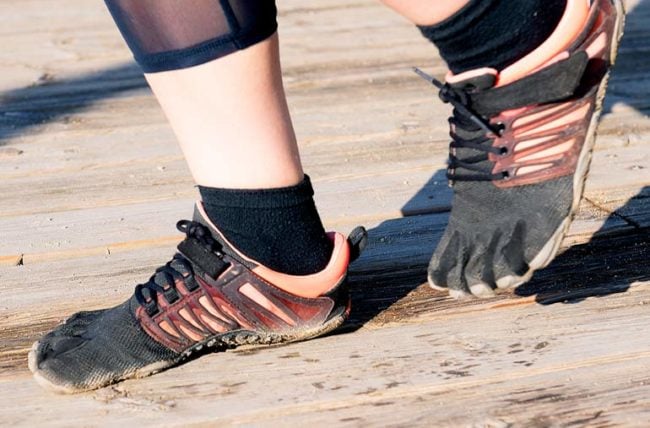 Some people prefer shoes that truly fit like a glove.

A group within the minimalist shoe movement swears by odd-looking footwear featuring separate slots for each toe. These so-called “gloves for your feet” are meant to mimic going barefoot, encouraging a more natural movement as you run or walk.

The simplistic gear lacks the cushioning and arch support found in more traditional shoes. Why? Well, the idea is that a stripped-down shoe strengthens your foot muscles, ligaments and tendons, which helps reduce your risk of chronic injuries.

In truth, the concept has some validity … but the theory isn’t all that sure-footed, either. Let’s walk through the arguments for and against toe shoes with podiatrist Nicole Nicolosi, DPM.

What are toe shoes?

For starters, they’re a bit controversial. They exploded on the running scene a little more than a decade ago before seeing sales drop amidst lawsuits questioning the veracity of all those good-for-your-feet health claims.

In 2011, the U.S. Army even banned soldiers from wearing toe shoes while training with this edict: “Only those shoes that accommodate all five toes in one compartment are authorized for wear.”

A niche market for the glove-like footwear remains. There have even been signs of toe shoes becoming somewhat of a haute couture fashion item.

Overall, running and athletic-focused toe shoes are noted for being:

Are toe shoes good or bad?

The answer to that question isn’t exactly clear-cut. “These minimalist-type shoes are good in certain respects and negative in others,” says Dr. Nicolosi. “That being said, they’re definitely not for everyone.”

So, let’s look at the potential advantages and disadvantages, as well as who might want to consider adding toe shoes to their closet.

The pros of toe shoes

The argument for toe shoes begins with strength-building. One study found that runners and walkers who wear toe shoes increase muscle thickness in their feet, which can help stabilize their arches.

Supportive shoes, on the other hand, don’t work those foot muscles quite as hard because they’re offering support. Over the long term, that may contribute to a gradual flattening of the arches.

“One of the main selling points of minimalist or toe shoes is that they’re meant to reduce stress injuries that could come from wearing more of a structural or restricted shoe,” says Dr. Nicolosi.

The cons of toe shoes

As explained above, the “good” thing about toe shoes centers on their lack of extra support for your feet. The “bad” thing? It’s exactly the same thing. (As we said, this topic tends to stir up some debate.)

“With this lack of support, you’re predisposing the foot into other mechanical conditions that can lead to problems,” states Dr. Nicolosi.

There may be a place for toe shoes on your shoe rack if they’re used in moderation. If you’re a runner or distance walker, for instance, a trek in the shoes could be viewed as a cross-training variation to your routine.

“A minimalist type of shoe could be beneficial for an experienced runner or active walker who wants to take it to the next level,” notes Dr. Nicolosi.

Just be careful not to do too much too soon while wearing the shoes. Give your feet time to adjust to wearing shoes that offer less support, as it will be more taxing on some muscles, joints and tendons.

Overall, though, Dr. Nicolosi suggests that you’re probably better off sticking with your tried-and-true footwear. “I’m more in the camp of giving your feet some support,” she says.

In other words, keep “gloves” as a hands-only item.

The Benefits of Barefoot Running

How to Find the Best Shoe (and Fit) for Your Child

7 Questions You May Be Afraid to Ask About Stylish Shoes

​The Best Summer Shoes for Your Feet

What Kinds of Boots Are Healthiest for Your Feet? 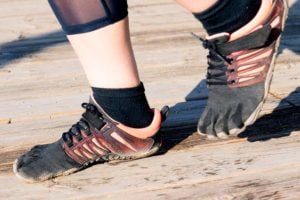 Are Minimalist ‘Toe Shoes’ Good for Your Feet?

Have you ever considered trying minimalist toe shoes that look like gloves for your feet? Before you make the change, here’s some advice from a podiatrist.