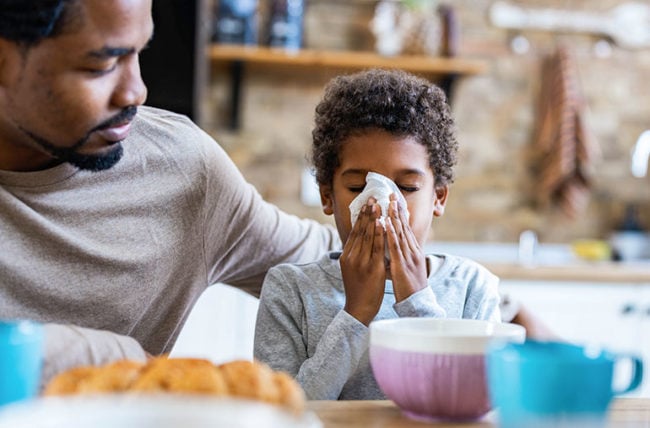 We’ve all dealt with a runny nose at different points in our lives. Sometimes, it’s because we have a cold, the flu or allergies.

But sometimes, we might need to break out the tissues because the foods we eat can make our nose turn on like a faucet.

Ear, nose and throat (ENT) specialist Raj Sindwani, MD, explains why your nose may run and how to get relief.

Why does my nose run when I eat?

It’s believed that certain foods are a stronger stimulus to the trigeminal nerve.

“We think of our nose as just taking in air or smells. But there are nerves in our nose, which help produce mucus so it stays moist and helps with airflow regulation,” Dr. Sindwani explains. “The trigeminal nerve can also be stimulated by certain foods, which can then cause your nose to run.”

Gustatory rhinitis also tends to occur in adults older than 50.

“The reason why is unclear,” says Dr. Sindwani.

But older adults may also have to deal with other nasal issues like infections, allergies and irritants. Senile rhinitis, which results in post-nasal drip, itchy nose, sneezing, nasal dryness or crusting, is related to aging as well.

If you have gustatory rhinitis, you may experience the following symptoms while you eat:

These symptoms are very similar for different kinds of rhinitis as well.

Gustatory rhinitis is a form of nonallergic rhinitis. Allergic rhinitis can be triggered by mold, pollen and dust. Food allergies can also be at play with nasal symptoms. Common food allergens include peanuts, tree nuts, shellfish, gluten and eggs.

So, how do you figure out what’s actually causing your runny nose?

“Your doctor may diagnose you with gustatory rhinitis, but they will first make sure that there’s no other reason that your nose is running,” says Dr. Sindwani.

This’ll involve a thorough history and physical examination, which may include a nasal endoscopy and may even involve allergy testing.

“When other things have been ruled out, then what’s left over is nonallergic rhinitis,” says Dr. Sindwani. “And if the trigger is eating, then it is gustatory rhinitis.”

You can also have mixed rhinitis, which is when you have both allergic and nonallergic rhinitis. This is common, says Dr. Sindwani.

Foods that can trigger a runny nose

Many foods can cause a runny nose. Here are a few common ones:

Typically, your nose will stop running a few minutes after you’re done eating.

Sure, you can avoid foods that trigger a runny nose (sorry, salsa). But you can get relief from gustatory rhinitis. A few treatment options include:

“There are now some new in-office procedures that have been developed to also help with a runny nose,” he says.

While gustatory rhinitis isn’t serious, it can be frustrating and even embarrassing to deal with a runny nose while eating.

“The most important thing is getting to the right diagnosis, which will guide which treatment will be the most effective,” says Dr. Sindwani. “Just because a runny nose isn’t a massive crimp on your lifestyle doesn’t mean that you shouldn’t seek treatment. You don’t have to suffer through it.”

Surprising Facts About Your Nose

Chronic Sniffles? Find Out Why Your Nose Won’t Stop Running

Are My Frequent Sinus Infections a Sign I Have Nasal Polyps? 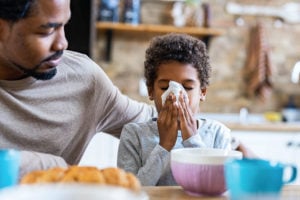 Your nose does more than just take in air and smells. The nerves in your nose can produce mucus and even get agitated by certain foods, resulting in a runny nose when you eat.