If you have a migraine, the last thing you want is to consume more caffeine and trigger more pain, right?

Don’t put your mug away so fast. According to research from the American Journal of Medicine, for patients who experience episodic migraines, one to two servings of caffeine may limit headache occurrence throughout the day. Once a person reaches three or more servings, though, that’s where you can run into trouble.

Director of the Cleveland Clinic Headache Center, Emad Estemalik, MD, offers some practical advice to have your coffee and drink it too.

Breaking down the data

A sample of 98 adults with frequent episodic migraines completed electronic diaries each morning and evening every day for six weeks. The total servings of caffeinated coffee, tea, soda and energy drinks consumed were recorded each day, along with twice daily headache reports documenting the onset, duration, intensity and medications used for each migraine since the previous diary entry. Other common migraine triggers that each participant normally experiences was recorded as well.

A self-matched analysis was used to evaluate the link between caffeinated drinks and migraines on the same or following day. Researchers compared each participant’s occurrence of migraines on days with and without caffeine intake, eliminating the chance of factors such as age, sex, and other behavioral and environmental factors to intrude with data. This strategy also accommodated for various caffeine dosages and serving sizes consumed by participants.

“The biggest thing to be aware of is the serving size of caffeinated beverage you are consuming,” says Dr. Estemalik. “Drinking one Venti at Starbucks is far different than drinking one Tall.”

How to Correctly Read a Nutrition Label

How Often Should You Pee During the Day? 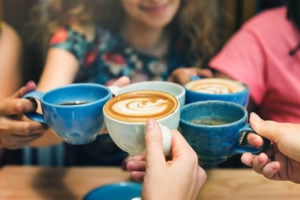 Study Explores How Much Caffeine is Too Much for Migraine Sufferers