You may already be taking medicines — either prescription or over-the-counter — to relieve morning stiffness, inflammation and pain in your joints. But many studies show that certain foods, spices and supplements may help in addition to medicines.

Many studies have found that the Mediterranean diet has various health benefits, some of which seem to overlap those attributed to nonsteroidal anti-inflammatory drugs (NSAIDs).

A Mediterranean diet consists of a high level of low-glycemic fruit, vegetables and legumes; a high level of unsaturated fats, especially olive oil, complemented by a modest amount of alcohol, mainly in the form of wine; a moderate to high level of wild fish; and a low level of dairy products and red meat.

The beneficial effects of fish oils are attributed to their omega-3 fatty acid content. Studies of fish oil consumption show that it has anti-inflammatory benefits and is particularly helpful for joint pain.

A 2008 Australian study is one of many that showed fish oil reduced joint pain, increased cardiovascular health and reduced the need for NSAIDs.

“In addition to other vegetables, you should try to eat a half cup of a cruciferous vegetable every day, such as broccoli, cauliflower, Brussels sprouts or kale,” she says. “These are all nutritional powerhouses, chock full of antioxidants, vitamins and fiber.”

In 2005, a team of researchers in Maryland studied the effects of sulphoraphane, an antioxidant compound found in cruciferous vegetables, and found that it blocks an enzyme that causes joint pain and inflammation. In addition to aiding arthritis patients, it may be helpful for athletes who put a lot of pressure on their joints.

A 2006 Arizona study showed promising research linking turmeric to the prevention of rheumatoid arthritis and osteoporosis.

Add turmeric and ginger to smoothies, eggs, or sauces for an anti-inflammatory punch.

Green tea is one of the most widely consumed beverages in the world, and its effects on health is the subject of much research.

Long-term use of NSAIDs can have adverse effects and cause discomfort; the polyphenolic compounds from green tea possess anti-inflammatory properties and have been shown to be an effective complement to nutritional therapy.

“Sugars and refined grains, including white rice, pasta and white bread, are the worst food culprits when it comes to reducing or relieving joint inflammation,” she says.

“Choose grass-fed or wild game over conventional sources due to the healthier fat profile,” says Fiorita. “Another big no-no, for many health reasons, is trans fat or partially hydrogenated oil.”

Also, avoid omega-6 fatty acids. The American diet is generally higher in omega-6s due to the high consumption of processed foods. The extra consumption of omega-6s can promote inflammation. Sources include corn oil, safflower oil, sunflower oil, peanut oil, grapeseed oil and vegetable oil. Check the ingredients lists for condiments such as mayonnaise and salad dressing.

If you feel that you’ve cleaned up your diet and are still experiencing food-related joint pain, consult with a registered dietitian who is proficient in identifying food sensitivities for a personalized approach.

Nordic Diet: What Is It and What Can You Eat?

Want Strong Bones and Joints? Get Your Nutrients From Food, Not Supplements 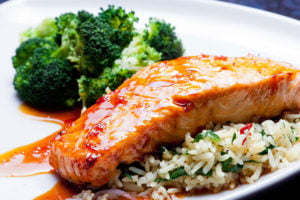 You may already be taking medicines — either prescription or over-the-counter — to relieve morning stiffness, inflammation and pain in your joints. But many studies show that certain foods, spices and supplements may help in addition to medicines.