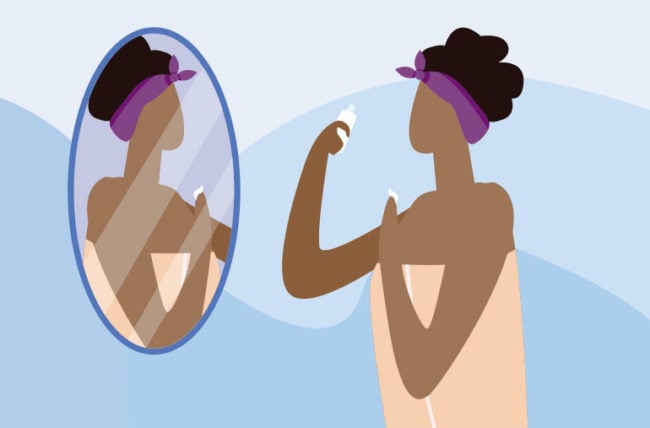 When the seasons change, you switch up many things — swapping cooler summer clothes for a warmer winter wardrobe, for example, or lighter dinner fare for heartier soups and stews. Unfortunately, winter also often brings about changes to your skin. Dry skin is extremely common when the weather turns colder.

Our skin traps humidity or moisture thanks to natural oils, which act as a barrier of protection and hydration. In general, dry skin is caused by a weakened skin barrier, says dermatologist Alejandra Estemalik, MD. The reason your skin not performing as well as it should be is because there’s a decrease in these natural oils, due to overwashing or using products that dry out your skin.

Dry skin symptoms can include itching, flakiness and redness, although in more severe cases, your skin can also become cracked or bleed. Thankfully, Dr. Estemalik has some tips so you don’t have to spend the entire winter feeling miserable and uncomfortable in your skin.

Why is my skin dry in winter?

Call it a perfect storm of environmental conditions. Not only is outside humidity lower, but cold temperatures also mean you’re spending more time inside, which isn’t always ideal for your skin. “In winter, environmental humidity is low,” says Dr. Estemalik. “But we’re also exposed to forced air or heat, which is also going to decrease humidity indoors and cause dry skin.”

Due to the natural ebb and flow of the seasons, you’re also exposed to less sunlight in the winter. Besides being a good source of vitamin D, sunlight is also a natural anti-inflammatory, which can help certain health conditions.

“In the summer, when you’re in the pool, you’re exposed to chlorine and sunscreen, which are skin irritants,” says Dr. Estemalik. “But you’re also in the sun. In people with eczema who get flare-ups in the winter, we have them do light treatment — or phototherapy — because it can make their skin less itchy.”

In addition to seasonal changes, genetics can factor into whether someone has dry skin. Some people have drier skin because they don’t produce enough of a protein called filaggrin, which plays a role in forming and hydrating your skin barrier.

Caring for dry skin in the winter involves a combination of habit changes, product swaps and reading ingredient labels carefully.

Limit the length and frequency of your showers

A long, hot shower feels great when it’s chilly outside — but, unfortunately, it’s not great if you have dry skin. “It’s cold, so everybody feels like taking a hot shower is a good remedy,” says Dr. Estemalik. “But overwashing will dry your skin. The heat in the water dries the oils out of your skin. However, the hot water itself will also dry your skin. The warmer water you use, the drier your skin’s going to be.”

Dr. Estemalik recommends limiting showers to between 5 and 10 minutes, and showering every other day if you’re not getting sweaty exercising. “If you work out three times a week, you don’t need to shower every day.”

When you moisturize your skin is also key. After a shower, pat your skin dry with a towel and then immediately apply moisturizer. “The function of most moisturizers is to trap moisture in your skin,” says Dr. Estemalik. “When you apply moisturizer on skin that’s really, really dry, it’s not going to be that helpful because there’s no moisture to trap. Applying moisturizers on damp skin is much more beneficial, especially if your skin is dry to start with.”

When thinking about what products to buy, Dr. Estemalik has a good rule of thumb: “The better they smell, the more irritating they are for your skin. I like to call those micro-irritations. We accumulate micro-irritations that eventually will cause your skin to be dry, itchy and cracked.” Fragrance-free moisturizers, such as the old medicine cabinet standby Vaseline®, are great options.

Keeping laundry day fragrance-free is also important. “Detergent has fragrance, and on top of that, we use dryer sheets,” says Dr. Estemalik. “They make your clothes feel really clean, but they’re another irritant that comes in contact with you 24/7. Even when you’re not wearing your daily clothes, you’re wearing pajamas. So this is something that you’re experiencing all day long.”

Not all moisturizers are created equally — or from the same ingredients. “Lotions are much more popular because they’re easier to apply, but that doesn’t necessarily mean that that’s the best type of agent to moisturize your skin,” says Dr. Estemalik. “Lotions have a lot of alcohol and fragrance in them, both of which are irritants to the skin. But dermatologists favor creams over lotion.”

For example, when looking for a cream, read the ingredient label and pick products that contain hyaluronic acid and ceramide — both moisture-friendly ingredients — rather than botanicals like lavender tea tree oil or coconut oil.

Some other skincare products you might use on a daily basis can also have skin-irritating ingredients. Acne medications can contain salicylic acid and benzoyl peroxide, while anti-aging products often contain alpha hydroxy acid, glycolic acid or retinol.

Using these products less frequently is one solution. “Anti-aging products may work out well in the summer but the ingredients in them that help promote quick skin cell turnover may be too drying in the winter,” says Dr. Estemalik. “When it comes to the winter and those anti-aging products, decrease your use to three or four times a week instead of every day.” The same holds true for acne medication, she adds.

Soap is known for drying out the oils in your skin. Overexfoliating can also be damaging. “Especially on the face, many people will see flakiness and dryness and think, ‘Oh, I need to exfoliate’,” says Dr. Estemalik. “But exfoliating is super potent. It strips moisture or oils out of your skin, and will even make your skin even itchier and drier.” Exfoliate once or twice a week max, she recommends.

It’s very common to get dry skin on your hands. “Especially in the times of COVID-19, we’re using lots of alcohol-containing sanitizer,” she says. “That’s a drying and irritating agent.” You don’t need to stop sanitizing — just moisturize as much as you can with something that has dimethicone, a silicone-based product that’s great for skin dryness.

Wear gloves when you go outdoors in the winter, as well as when you’re doing something where your hands get wet, such as doing dishes or washing your car. Coming in contact with chemical greases and other harsher micro-irritants will dry out your hands, too.

Using a humidifier in the room where you sleep can help reduce the effects of spending lots of time in dry and low-humidity environments. Dr. Estemalik recommends setting the machine to between 30% and 50% humidity.

Could it be more than just dry winter skin?

Sometimes. For example, adults over the age of 40 naturally have drier skin and should be applying moisturizer regularly. “Just like your hair’s not the same, your skin’s not the same after that age,” says Dr. Estemalik. “As we get older, our skin naturally produces less oil.”

Seasonal shifts that don’t necessarily have to do with the weather can also affect certain conditions. Dr. Estemalik says holiday stress and consuming caffeine can make rosacea worse. The anti-inflammatory condition psoriasis is also affected by a lack of sunlight. Plus, eczema can flare up and worsen in the summer because your skin is more irritated by sweat or because you swim a lot, she adds.

However, dry skin can also be a sign of a completely unrelated health condition, such as diabetes, hypothyroidism, kidney failure or a nutrition deficiency. The key to figuring out what’s going on is to watch out for certain symptoms.

“Look out for intense itching,” says Dr. Estemalik. “If your skin is getting darker in the areas where you’re scratching, and if there are areas that persistently rough, flaky and red, you should visit a doctor.”

Inflamed skin that starts crusting over is another red flag, as this could mean a bacterial infection. “We see bacterial and viral infections in people that have eczema,” says Dr. Estemalik. “If your skin is red, inflamed and scaly, and on top of that you see crusting, especially if it’s yellow crusting, it’s time to go the doctor. If you’re experiencing intense itching, and your skin is bleeding, it’s time to go to the doctor.”

Over-the-counter hydrocortisone cream might help in some instances. However, when in doubt, seeing a doctor is the best option. After all, there are situations when a medicated cream or lotion is the best option. “I see a lot of people that think, ‘Oh, I have eczema, and I’m going to moisturize more and more,’” says Dr. Estemalik. “There’s times when moisturizer is just not enough, and you need something medicated. You need help.”

How to Choose the Best Moisturizer for Your Dry Skin

Micellar Water: What It Is and How To Use it

What Is Slugging and Should You Try It?

Does Sunscreen Ever Expire?

Here’s the Right Order to Apply Your Skin Care Products

Skin Care for Men: What You Need To Know

If you find yourself developing dry skin in the winter, you’re not alone. But our winter skin care tips can help you combat and ward off winter’s cold touch.