When the pandemic started, people were quick to say that COVID-19 was like the flu. We learned quickly that wasn’t the case. Yes, COVID-19 and the flu are both contagious respiratory illnesses. But while some of their symptoms are similar, they affect your body in different ways.

Now, with winter right around the bend, we’re preparing for flu season and doctors are concerned seasonal spikes in the flu and COVID-19 may happen at the same time, leading to what they call a “twindemic.” Plus, there’s always the risk you could be infected with a dangerous combination of both at the same time — what many doctors have come to call “flurona.”

Microbiologist and pathologist Daniel Rhoads, MD, helps us get ready for possible surges of the flu and COVID-19 and offers some helpful advice for managing flurona.

Why you should be worried about a possible twindemic

Influenza rears its ugly head every flu season, which happens in the Northern Hemisphere every year from roughly October through May.

But for the last two years, influenza cases have been lower than usual. Instead, concerns have been largely focused on the dangers of COVID-19 and all of its variants.

“During the 2021-2022 winter, we experienced a seasonal outbreak of influenza that peaked in December 2021 and peaked again in April-May of 2022,” says Dr. Rhoads. “The flu season was interrupted by the emergence of omicron in January 2022 when omicron cases soared and influenza rapidly decreased before it rebounded again as omicron waned.”

Now, doctors are concerned about a “twindemic,” a situation they say may overwhelm hospitals if there’s a surge in both the flu and COVID-19 at the same time. Doctors are confident that a winter surge in COVID-19 cases is coming, similar to last year’s surge. Doctors are also looking at this year’s flu spike in Australia — the worst it’s been in five years — as a predictor for what may happen this winter in the U.S.

“Influenza is not a single virus,” explains Dr. Rhoads. “There are variants of influenza similar to variants of SARS-CoV-2. In the winter of 2021-2022, only the H3N2 influenza A strain of flu circulated. Another strain of influenza A is H1N1, which first emerged as a global pandemic in 2009 and which has not widely circulated in the Northern Hemisphere since before the emergence of COVID-19.

“It is uncertain if H1N1 and/or an influenza B strain of flu will circulate this winter, and it is uncertain if they might have a larger than typical impact on the population because of the years that have passed since they last circulated.”

Is co-infection a new phenomenon?

“Before COVID-19 emerged, people would get multiple viruses that cause common colds or common coronaviruses. And then, with rhinovirus and adenovirus, they’re hard to tell apart. You also could have a handful of other things, like human metapneumovirus and adenovirus. People can get more than one or sometimes, more than two at the same time,” states Dr. Rhoads.

Why is flurona concerning?

Between the end of January and March 2020, reports of co-infection emerged out of Wuhan, China. Ninety-seven out of 213 people who were treated for COVID-19 at Tongji Hospital also tested positive for influenza A, which is a flu virus that tends to cause seasonal outbreaks. There were also reports of co-infection in the United States and other countries.

“COVID-19 first emerged in the middle of flu season. Both were circulating for a short period and then COVID-19 kind of crowded out influenza. It was like the flu disappeared or went incognito,” Dr. Rhoads says.

He adds that two years ago, flu season was pretty much non-existent in the Northern Hemisphere.

“It just wasn’t circulating. Last year, influenza did manage to come back at the same time that COVID-19 is still circulating. Since they’re both around, there will be some overlap and co-infections,” notes Dr. Rhoads.

Who’s at risk for flurona?

As cases of COVID-19 and flu co-infection have been pretty minimal so far, Dr. Rhoads says it’s too early to connect the occurrences to specific groups or medical conditions. But he also says, if you’re prone to catching respiratory infections or living with a condition that compromises your immune system, you’ll want to be careful. And if you’re still hanging out with a bunch of people despite all the warnings since 2020, you’re putting yourself at risk for co-infection of flurona.

“If you’re at risk for getting respiratory viruses, there’s a chance that you’ll get more than one. Also, respiratory viruses are passed from person to person. So, the more people you’re around, the more chances you have to be exposed to different viruses,” warns Dr. Rhoads.

With all the unknowns, it doesn’t hurt to take extra precautions right now, especially if you’re older or have an underlying condition that puts you at greater risk of contracting COVID-19. Dr. Rhoads adds that those who are immunocompromised need to protect themselves.

Will flurona make you sicker?

Again, as there haven’t been a large number of co-infection cases, Dr. Rhoads says it’s still too soon to tell.

“It’s not necessarily worse clinically if more than one virus causes an infection. But we’ll have to look at the data and see if co-infection with flu and COVID-19 changes the clinical course at all. Right now, we don’t have enough data to know at this point.”

How is flurona treated?

For severe infections, Dr. Rhoads says there are oral therapies available to help treat both COVID-19 and the flu. These therapies would fall along the lines of oseltamivir (Tamiflu®) and antiviral pills.

Milder symptoms can be managed at home with over-the-counter medications and fever reducers. And should you find yourself with this combo of respiratory illness, be sure to isolate, so you don’t pass flurona on to friends or family.

The bottom line on flurona and the twindemic

The problem is that COVID-19 and the flu are so similar in the way they present symptoms that it’s often hard to tell them apart. To be safe, you should treat flu-like symptoms as if you have COVID-19. And just like COVID-19, the flu develops new strains every year. That’s why it’s still important to get your flu shot and get vaccinated for COVID-19.

If you’re sick, seek treatment and stay home until you’re no longer contagious.

“Preventing disease is ideal and one of the best tools that we as individuals and as a population have to prevent severe disease due to flu or COVID-19 is the memory of our immune system,” stresses Dr. Rhoads. “Vaccines help to teach our immune system the specific shape of these viruses, so that our antibodies and immune cells can quickly recognize these viruses if we are unfortunate enough to encounter them in the future.”

Why You Definitely Need to Get a Flu Shot This Year

What is the Coronavirus 15-Minute Rule?

How To Prepare for Flu Season

Is the Flu Dangerous?

10 Common Winter Illnesses: Are You Contagious?

4 Important Facts You Need to Know About Antibiotics 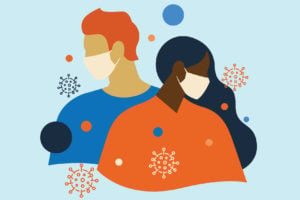 Prepping for Flurona and a Twindemic (COVID-19 and the Flu)

As flu season approaches, surges in cases of COVID-19 and influenza could lead to what doctors are calling a “twindemic” — and that’s in addition to “flurona.” Learn what this all means and how you can stay safe this season.