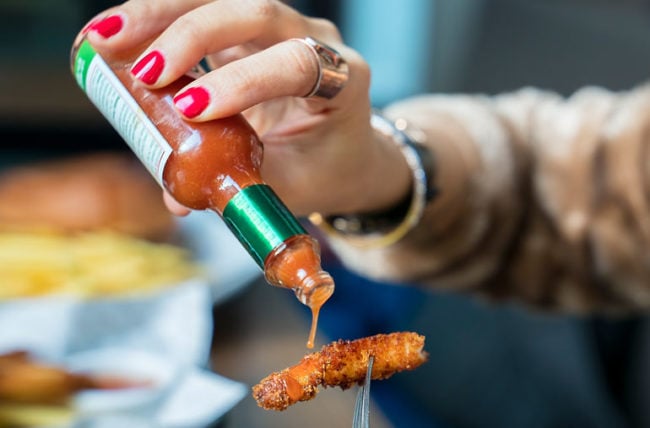 If you have Crohn’s disease, you know how awful a flare-up can be. Symptoms like stomach pain, cramping and diarrhea make you feel miserable and put a damper on your plans. Could your diet be contributing to your symptoms?

A burger or bowl of ice cream isn’t likely to cause a flare-up, says registered dietitian Anna Taylor, RD. But if you’re actively dealing with symptoms, the foods you choose might make things worse.

“There’s not a specific diet for Crohn’s disease,” she says. “Foods that might be a problem for one person can be totally fine for others.” And while there isn’t much research about Crohn’s and diet, there are some usual suspects you might want to avoid when your gut is giving you grief.

Taylor emphasizes that you shouldn’t try to manage the disease with food alone. “Crohn’s isn’t something you can cure with diet – you need to have a health care team treating this,” she says. “But if you’re having a flare-up, these are some foods you might want to avoid.”

The high amounts of fiber in foods like whole-grain bread, whole-wheat pasta, popcorn and bran can cause a lot of traffic through the gastrointestinal tract. “That can be irritating to someone experiencing a disease flare,” Taylor says.

Beans are a wonderfully nutritious food — when you’re feeling good, Taylor says. But during a flare, their high fiber content and tendency to cause gas is a lose-lose.

“Some people think they can’t eat vegetables with Crohn’s, and that’s not true,” Taylor says. “But you do have to be careful during a flare.” Aim for cooked veggies rather than raw to avoid irritating your gut. And avoid fruits and vegetables with skins and seeds intact.

Many people find that bananas or canned pears are gentler than an apple or bowl of raspberries, for instance. Also steer clear of gassy veggies like broccoli, cabbage and Brussels sprouts. “They’re high in fiber and gas-producing — kind of a double whammy,” Taylor says.

Nuts and seeds can be rough — literally. Their sharp edges can be irritating to the lining of the GI tract. “But people often tolerate ground nuts or seeds,” Taylor says, so consider giving smooth peanut butter or sesame tahini a try.

Alcohol can be irritating to anyone’s GI tract, especially people who are already experiencing stomach symptoms. That goes for all types of drinks, Taylor says. “Beer, wine and liquor are not great choices if you’re having symptoms.”

Caffeinated drinks, too, can be a problem. “Caffeine increases the wave-like motion of the GI tract, which is what propels waste through the system,” she says. “If you tend to have diarrhea with your Crohn’s flare, caffeine is not your friend.”

Sugary drinks like soda, fruit juice and lemonade can also cause more diarrhea when you’re having a flare-up. So-called “sugar alcohols” are also a problem. These are sweeteners used in sugarless gum, candy and some drinks.

They go by names like xylitol, sorbitol and maltitol, which are listed on the nutrition facts label. “In many people, these ingredients are poorly absorbed, which can cause gas, bloating and diarrhea,” Taylor says.

Contrary to popular belief, many people with Crohn’s can actually consume dairy products without grief, Taylor says. But when you have symptoms, whole-fat dairy products (like whole milk, ice cream and sour cream) can be a problem, so step away from the fettuccini alfredo.

Odds are, you won’t be tempted to reach for the hot sauce if you’re having Crohn’s symptoms. “Most people who have a flare aren’t eating spicy chili or burritos,” Taylor says. Trust that instinct. Spices like chili powder, cayenne pepper and spicy curries can add heat to an on-fire GI tract.

“It’s hard for your body to deal with the amount of fat in fast food and other greasy, fatty foods like sausage or salami,” Taylor says. Save the drive-through for another day.

Not everyone with Crohn’s disease has the same food triggers, Taylor says, so you might need to do some sleuthing to figure out what works (and doesn’t work) for you. Try keeping a food journal — jotting down what you ate and any symptoms you notice — to look for clues about the foods that make your stomach unhappy.

When you aren’t having symptoms, though, try to eat a balanced diet. You don’t want to regularly shun healthy foods like whole grains, veggies or beans. “Malnutrition can be a problem for people with Crohn’s disease, so only avoid these foods during a flare-up,” she says.

Managing this lifelong disease can be a challenge, and a dietitian can help you manage your diet.

“Crohn’s is different for every person, so work with someone who can help you design an individualized plan,” Taylor says. “If you have a dietitian in your corner, they’ll be available so that when you have a problem, they can steer you in the right direction.”

7 Foods That Are High in Magnesium

Signs You May Have a Magnesium Deficiency

How to Lower Your Risk of Future Pancreatitis Attacks 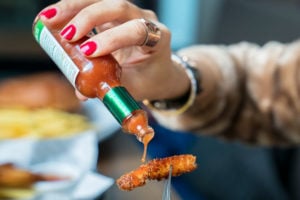 What Not to Eat If You Have Crohn’s Disease

Certain foods can make the symptoms of Crohn’s disease worse. If you’re having a flare-up, steer clear of these nine foods to avoid irritating your GI tract.