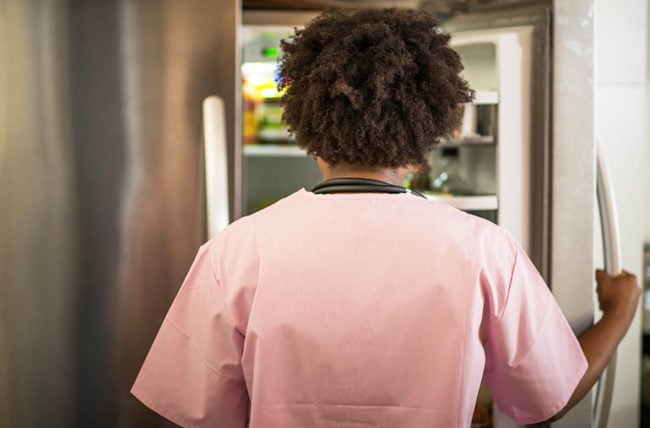 Are there certain foods you just can’t eat one (or one bite) of? Maybe you’ve been known to polish off a bag of chips in front of the TV, or always find yourself going back for a second slice of cake at a party.

Overeating certain foods doesn’t mean you’re a gluttonous or weak-willed person. It means your body has learned to crave junk food. Intensely addictive processed foods can spike your blood sugar, hijack your brain chemistry and drive you to seek out more.

When these foods are readily available all around you, compulsively eating them can turn into habit, leaving you struggling with your weight or feeling sick.

How can you recognize and break the cycle of eating – and overeating – addictive foods? Psychologist Susan Albers, PsyD, sheds some light.

Food addiction: Is it real?

Let’s start at the beginning: Can you really be addicted to food? That question doesn’t have a simple answer. In fact, it’s kind of controversial.

Food addiction is not an official medical diagnosis, though addictive food behaviors have been linked to medical conditions including obesity and binge eating disorder.

And whether food itself is addictive is still up for debate.

“Some people believe you can’t be addicted to a substance that you need to survive and that food itself is not actually addicting,” Dr. Albers says. After all, food doesn’t put you in an altered state of mind like addictive drugs do.

There’s also not one ingredient that can be singled out as being addictive. For some people, it’s greasy fast food. For others, it’s sweets. But even then, you wouldn’t binge on a bowl of granulated sugar. It seems to be processed foods with some combination of ingredients that become problematic for people.

Yet other researchers argue that food is indeed addictive. Certain foods light up pleasure centers in your brain and trigger the release of feel-good chemicals such as dopamine, much like other addictive substances do. In people who are more predisposed to addiction, those chemicals can overpower other signals from the brain that tell them they’re full or satisfied, which can lead to a cycle of overeating.

Over time, these people may develop a tolerance to the foods they’re addicted to, Dr. Albers says. They need to eat more and more of them to feel the same level of pleasure. And although they realize the negative consequences of their overeating and want to stop, nothing they try seems to work.

“Many of the words that people use to describe how they feel with food are very much related to addiction, such as cravings, withdrawal and feeling out of control,” Dr. Albers notes.

A different way that some people describe this phenomenon is that it’s a “process addition” rather than a true addiction to food. People become dependent on the process that happens – the good, soothing feelings and pleasure that go along with eating – rather than to the food itself.

Sometimes, researchers say, people resort to addictive eating behaviors as a way to cope with stress and emotions.

More research is needed on this subject, but what’s clear is that addictive-like eating is reality for many people, and it can affect their health, self-esteem and quality of life in many negative ways.

The most addictive foods

The foods that people are most likely to compulsively overeat tend to have something in common: A powerful combination of carbohydrates (such as refined grains and/or sugar) and fat.

You won’t find many examples of this irresistible combo in nature. For example, rice is high in carbohydrates but low in fat, while nuts are high in fat but have minimal carbs. But processed food companies can mix ingredients and chemically exaggerate flavors to create taste sensations so appealing that you keep wanting more.

In a study where researchers asked people what foods they were most likely to overeat, some of the most common responses were:

Red flags to watch out for

If they’re not addressed, food-addictive behaviors can contribute to health problems associated with an unhealthy diet, such as obesity, diabetes and heart disease.

But not everyone who struggles with it is overweight. People who are a healthy weight can also fall into addictive eating behaviors. Sometimes, these behaviors can trigger other unhealthy patterns, such as crash dieting or over-exercising to burn off the extra calories consumed.

“It also really affects people’s quality of life because they feel so guilty or ashamed,” Dr. Albers says.

Watch for these troubling patterns of behavior:

How to get help for addictive eating

Willpower alone is rarely a strong enough defense against food addiction and the vicious cycle of cravings, overindulging and guilt it creates. In fact, trying to fight your cravings can even intensify them.

Dr. Albers recommends working with a psychiatrist or psychologist who can help you address both the physical symptoms and the underlying emotional factors that might be contributing to your food addiction. You might also find support groups like Overeaters Anonymous that host free in-person or virtual meetings in your area.

Learning what triggers your addictive behaviors will be an important first step. For some people, it’s stress or despair that leads them to turn to food for comfort. “If you can learn your triggers for overeating and break that cycle, that can be important because we can’t always control whether those addictive foods are going to be around us,” Dr. Albers says.

Mindfulness and other techniques to help you manage stress can also help overcome the cycle of overeating.

The more you’re aware of the forces at play in your cravings and what strategies can help combat them, the better your chances of breaking free of them and healing.

Orthorexia: When a Commitment To Eating Healthy Goes Too Far

You Want to Eat Healthier, But Your Partner Doesn’t. How Do You Navigate That? 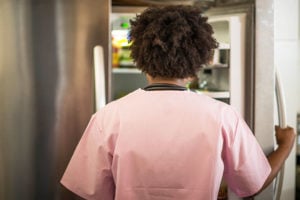 Why Are Certain Foods so Addictive?

Ever feel like you can’t eat just one (or one bite of) certain processed junk foods? Learn how these foods can hijack your brain chemistry and leave you wanting more, and how to break the cycle of overeating them.