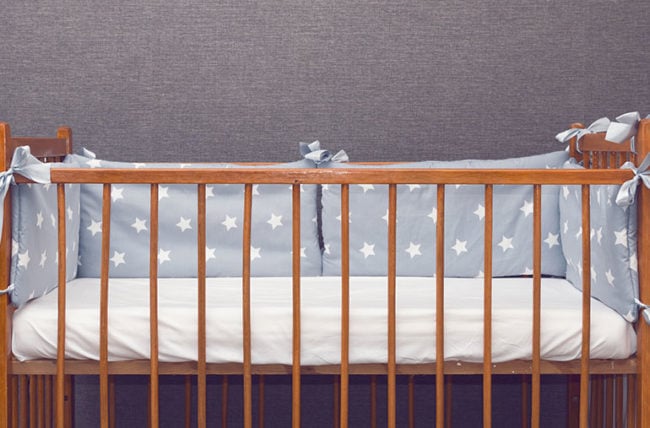 Wonderful memories may fill an heirloom crib where earlier generations of your family slept. But that old baby bed also holds something else: An unmistakable danger for your infant.

Antique baby cribs typically don’t meet heightened safety standards that went into effect in the United States in June 2011. Prior to that, federal crib safety standards hadn’t been updated in nearly 30 years.

So, what issues should you look out for to create a safe sleeping environment and reduce the risk of sudden infant death syndrome (SIDS) for your baby? Let’s get the answer from pediatrician Heidi Szugye, DO, IBCLC.

The dangers of antique cribs

The U.S. Consumer Product Safety Commission (CPSC) recommends NOT using hand-me-down cribs more than a decade old or cribs that have been modified. Broken cribs also landed on the do-not-use list, though that kind of goes without saying.

Here are seven ways many older cribs can be hazardous:

One of the most significant changes that came with the 2011 crib safety update involved a ban on drop-down sides, which were once fairly common. Having one side of the crib move up and down allowed children to easily be lifted out of the bed.

“They might have made our lives easier as parents, but drop-side cribs were dangerous — and sometimes even deadly — for children,” says Dr. Szugye.

The CPSC linked 32 suffocation and strangulation deaths to drop-side cribs between 2000 and 2010. Concerns about drop-down sides led to warnings and millions of cribs being recalled before the ban.

Requirements in place since 2011 call for fixed, unmovable sides on cribs.

Older cribs tend to have large gaps between side slats. The problem with that? The openings were often large enough for a baby’s body — but not their head — to fit through, which creates a strangulation risk.

How far apart should crib slats be? Current requirements call for the space between slats to be no more than 2 3/8 inches. That’s roughly the width of a soda can.

Decorative cutouts in a crib headboard or footboard undoubtedly can be eye-catching. Unfortunately, those carved-out designs also can be arm, leg and even head catching for babies.

“You don’t want any openings in a crib where a baby could somehow get stuck,” notes Dr. Szugye.

Knobs are a definite no-no on the corners of cribs. To avoid snagging clothing on babies and possibly causing strangulation, corner posts should not extend more than 1/16 of an inch above the side panels.

While we’re on the topic of mattresses, the CPSC has adopted new requirements for crib mattresses that begin in fall 2022 to reduce the risk of injury and death for babies. The new rules address hazards such as coil springs and excessively soft mattresses.

Time takes its toll on everything, including cribs. Missing, loose or broken parts can undermine your baby’s bed and create dangers.

If your crib is really old — we’re talking before 1978 and the peak of the disco era — the paint or finish could contain lead, a poisonous metal that’s harmful to babies and young children.

Lead poisoning can irreversibly damage your child’s nervous system, brain and other organs. Aside from the health issues, lead can also be the root cause of learning disabilities and behavioral problems.

The bottom line on cribs

Babies can spend 12 to 16 hours a day sleeping, notes Dr. Szugye. That’s a lot of time — and it’s essential that it be spent in a safe space.

If cost is an issue for getting a newer and safer crib, numerous nonprofit groups and organizations — including Cribs for Kids — can help you acquire a crib that meets current standards.

And if you can’t bear to part with that old crib, there are creative ways to reuse it. Crafty people convert cribs into desks, benches and even outdoor flower beds. A quick online search offers plenty of other ideas, too.

“You don’t have to part with a cherished crib,” says Dr. Szugye. “Just don’t use it for a sleeping baby.”

Is Bed Sharing With a Baby Safe?

Are Sleep Sacks Safe for Babies?

The Risks of Bottle Feeding in Bed Is an Older Crib Safe for Your Baby?

That antique crib is beautiful, but it holds dangers for your little one. It’s best to avoid using any cribs produced before 2011, when new safety standards took effect.