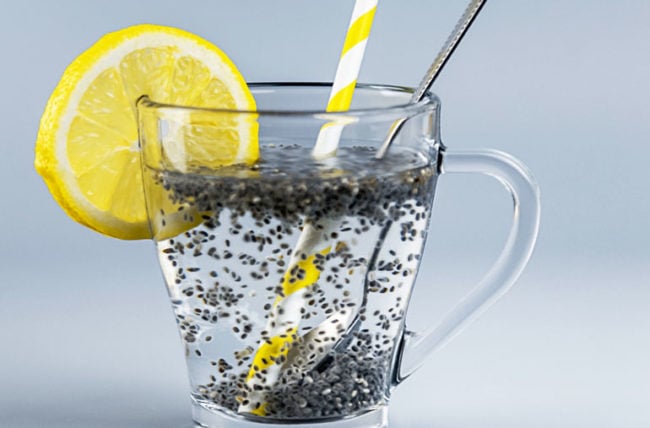 What do you think of when you think about chia? Maybe it’s pudding, or maybe it’s quirky houseplants. For some TikTokkers, it’s breakfast. They’ve started putting these tiny seeds in water and drinking them to stave off hunger — or so they say.

Is there any truth to this trick? Registered dietitian Beth Czerwony, RD, explains the science behind the seeds, including whether this trend is one to try or to toss.

The benefits of chia seed water

Chia seeds are incredibly healthy, a source of fiber, protein and various nutrients. They’re also whole-grain, low-carb and low-calorie, with only about 100 calories per ounce.

They come from Salvia hispanica, a purple-flowered plant in the mint family, which grows in Mexico and Guatemala. And though the seeds themselves are teeny-tiny — similar to poppy seeds — they pack quite the nutritional punch. They’re loaded with:

And that’s not all. “Chia seeds are considered a superfood,” Czerwony says. “They have some nice vitamins and minerals, like phosphorus, magnesium, iron and zinc — though quite honestly, not too many people have those deficiencies.”

Chia seed water is exactly what it sounds like: A spoonful of chia seeds dropped into a glass of water. But why?

Chia seeds can absorb as much as 12 times their weight. When they get wet, they swell in size and take on a gelatinous texture — which is a polite way of saying that they get pretty slimy. Think tapioca, but less flavorful.

The idea behind drinking chia seed water is that the wet seeds will enlarge in your stomach and take up space, preventing you from getting hungry. That may, in turn, cause you to become less hungry and ultimately help you to lose weight.

“The chia seeds mix with the water and your gastric juices, and they expand in your stomach,” Czerwony confirms. “It keeps you fuller longer because it takes up space, and all of that soluble fiber slows down digestion.”

When your digestion slows, your body releases blood sugar at a slower rate, preventing the spikes and valleys in blood sugar that cause increased appetite (a.k.a. being “hangry”).

The risks of chia seed water

But Czerwony warns not to go overboard with the chia seed water. While it’s fine to do every once in a while, like to fend off that late-day urge to snack, it shouldn’t be seen as a key method for weight loss.

For starters, consuming chia seeds isn’t an alternative to a healthy diet — just a handy trick to be used on occasion. And if you’re gulping down a lot of fiber, be sure you’re also gulping down a lot of water, or you might end up with some pretty unpleasant digestive issues, including constipation, bloating and gas.

“Too much of a good thing is too much,” Czerwony says. “If you’re eating a lot of fiber and not drinking enough fluid along with it, the chia seeds will start to absorb the fluid in your gut and cause you to have hard stool.”

How to make chia seed water

Czerwony recommends putting one or two tablespoons of chia seeds in an eight- to 10-ounce glass of water. If you’ve never consumed the seeds before, you may want to start with a smaller amount to see how your body tolerates them.

And while you want to soak the seeds in water for a couple of minutes before consuming the concoction, don’t wait too long. “You’re going to have to drink it pretty quickly to get it down before it starts to solidify,” Czerwony advises.

The texture of chia seed water can be a little bit off-putting, to say the least, so feel free to flavor yours with lemon, lime, or whatever else makes it more palatable.

Not thrilled about glugging gelatinous goop? Chia seed water isn’t the only way to fill yourself up on fiber without going overboard on calories.

“Chia seed water is trendy right now, but it doesn’t do anything for your body that you couldn’t get from eating other sources of fiber,” Czerwony says. You’ll get the same effects from a big salad or a bowl of healthy oatmeal, which will keep you fuller longer than foods without a high fiber content.

If you’re sold on chia, though, you can still enjoy the benefits of chia seeds without drinking them in water. Here are just a few other forms in which to enjoy them.

5 Tips To Help You Snack Healthier at Work

What Is Maple Water and Should You Be Drinking It? 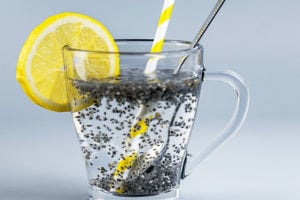 Some TikTokkers have started putting these tiny seeds in water and drinking them to stave off hunger — or so they say. Is there any truth to this trick? A dietitian explains the science behind the seeds, including whether this is one trend to try or to skip.