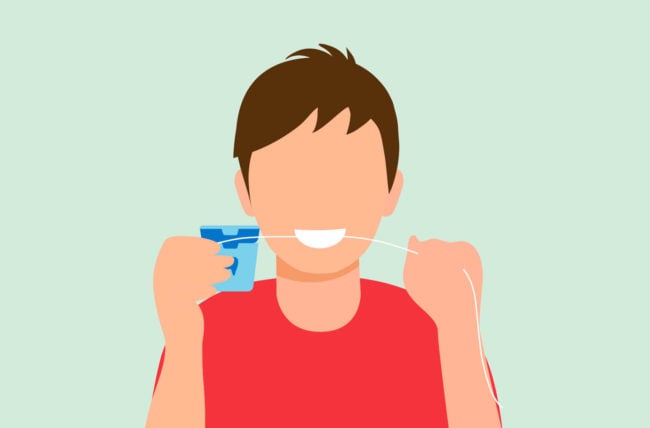 You know you’re supposed to brush your teeth and floss regularly, but, like … how? And when? And which should you do first? Does it even matter? So many questions!

Periodontist Sasha Ross, DMD, MS, is here to demystify your mouth, breaking down the oral hygiene habits that’ll keep your teeth and gums happy and healthy.

First things first: Which comes first? Are you supposed to floss before or after you brush? Umm, good question.

“The truth is that we don’t yet know for sure,” Dr. Ross says, “though one study suggests that flossing before brushing is the way to go, so that’s usually what I tell my patients.”

She walks you through the order or operations, including how to do each of them.

Step one: Bust out the dental floss

The study that Dr. Ross references looked at the effects of both flossing before brushing and brushing before flossing to determine which, if either, was better for dental health. It found that flossing first did a better job of reducing some types of dental plaque, a sticky film that forms on teeth.

“Flossing is incredibly important because studies repeatedly show that brushing alone doesn’t get to the area in between your teeth,” Dr. Ross confirms. “If you’re not getting rid of the plaque there, it can lead to cavities or periodontal disease.”

The same study showed that flossing first paved the way for the fluoride in toothpaste to work its magic — probably by getting rid of excess gunk (no, that’s not official medical terminology) and clearing the way for fluoride to more effectively reach teeth.

“At least one of the two times, you should brush for two whole minutes,” Dr. Ross advises. She recommends investing in an electric toothbrush, which has a built-in timer that tells you when your two minutes are up. And be sure to choose a toothpaste with fluoride.

That minty-fresh fresh taste should be the final step in your standard oral hygiene routine. Mouthwash, also called mouth rinse, is not a substitute for brushing or flossing, but it’s a solid endgame move if you want to keep your mouth in tip-top shape.

“I generally recommend something like Listerine®, which not only targets bad breath, but is also antibacterial and anti-gingivitis,” Dr. Ross says.

What about other oral hygiene tools?

Dr. Ross weighs in on a few other options you might’ve heard about, explaining whether they’re worthwhile investments and when to use them in your routine.

These inexpensive inventions have a small plastic handle for holding and a tiny piece of dental floss snared taut across the top for reaching in between your teeth.

“They’re better than nothing, but they aren’t as effective as a piece of string floss, which wraps around the teeth and gets under the gums in the right way,” Dr. Ross says.

They’re worth keeping in your car or purse to use in a pinch, though, and they’re a good option for anyone with limited hand dexterity.

Water flossing devices, also known as oral irrigators, are motorized devices that you aim at your gum line. Like a tiny hose for your mouth, they spray a steady stream of water that can dislodge anything stuck between your teeth that regular flossing and brushing might’ve missed.

Water flossers can’t remove film from your teeth, so they’re not a substitute for regular dental floss. But their added benefits can be especially helpful if you have:

“When you use a water flosser, a lot of times, you’ll see chunks of food fall out, even after you’ve flossed,” Dr. Ross notes. “They really can help decrease gum bleeding and tighten your gum tissue.”

These handy little devices aren’t a must-have, per se, but in addition to brushing your tongue, tongue scrapers may give you an extra boost of clean.

“The thought is that it may scrape away some of the bacteria that release sulfites, which cause bad breath,” Dr. Ross says.

Why should you floss before you brush?

Flossing before brushing has been shown to have a few more health benefits than if you brush first and then floss — but the most important thing, Dr. Ross says, is that you’re doing both, period.

That’s because having poor oral hygiene can lead to:

If you’re not sure whether you’re brushing and/or flossing properly, don’t hesitate to ask your dentist or dental hygienist for tips. You can even brush or floss in front of them so they can correct your form, if needed.

“When it comes to oral health, practice makes perfect,” Dr. Ross says. “It really can impact your overall health — so even if you’re struggling initially, please don’t give up.”

Here’s the Right Way to Floss Your Teeth

Is There a Link Between Gum Disease and Heart Problems?

Why Your Gums Bleed When Flossing

Safest Ways to Brush and Use Fluoride For Babies and Children

Is It Safe to Go to the Dentist While Pregnant? 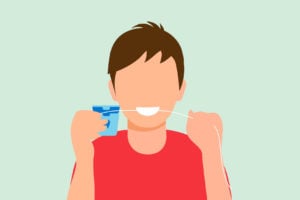 Should You Floss Before or After Brushing?

You know you’re supposed to brush your teeth and floss regularly, but which should come first? Does it matter? A periodontist helps demystify your mouth so you can keep your teeth and gums happy and healthy.