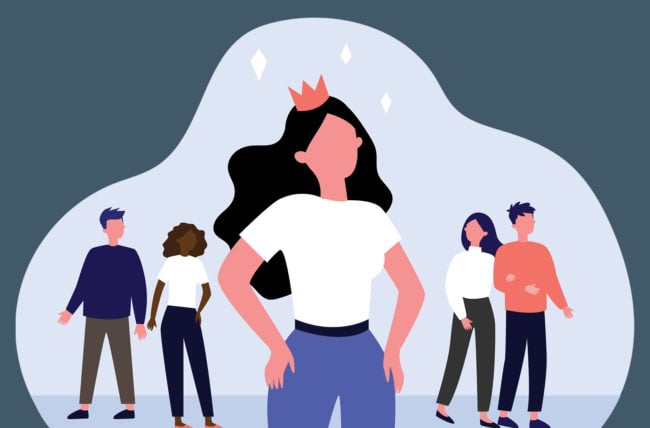 Don’t you just love it when you’re trying to share some good news and someone butts in to one-up you? Or every time you start to talk about something you’ve experienced, that same person hijacks the conversation so they can be in the spotlight yet again. Chances are, you might have a self-centered person in your life.

Are self-centered people truly terrible or can they redeem themselves? Behavioral health therapist, Ken Alexander, M.Ed., shares some helpful advice for dealing with the “ME, ME, ME!” person in your life.

What causes a person to be self-centered?

The American Psychiatric Association (APA) defines a histrionic personality disorder as “a pattern of excessive emotion and attention-seeking.” You might notice that people who are living with this condition may be uncomfortable when they are not the center of attention. They might also display rapidly changing, exaggerated emotions or might draw attention to themselves through their appearance. But people living with histrionic personality disorder aren’t cold by nature and they can still be quite empathetic.

On the other hand, those who are living with narcissistic personality disorder can crave admiration but don’t feel the need to be empathetic. These individuals have a heightened sense of self-importance, they have no problem taking advantage of others and they can be very entitled.

Alexander says that these personality disorders can develop during childhood or they might occur later in life. It’s also possible for someone to be born with them.

Is it good to be self-centered?

Surprisingly, being self-centered can be a good thing from time to time. Now, we’re not talking about the obnoxious or aggravating version of it. Instead, think about it more in the self-care sense, like when you could use some time to recharge so you avoid being around someone who is quite draining. According to Alexander, being selfish in this way can help protect your ego strength.

“Everyone is self-centered, to a degree. We need self-centeredness just to maintain our ego strength. Establishing healthy boundaries is key when dealing with self-centered people because in many cases, you might be dealing with family and friends. You’re not just going to dismiss them. So, you’ll need to have a strong set of boundaries in place mainly to protect yourself.”

When your ego is strong, you can handle stress and frustration better and you can resolve internal conflicts and emotional problems before they lead to more anxiety.

Can a self-centered person change?

The first thing to keep in mind when dealing with a self-centered person — they’re not going to change and you won’t be able to change them either. Preserve your sanity by accepting this and establishing strong boundaries as Alexander mentioned before.

“The behaviors that these individuals resort to will become intrusive if the people around them do not have a healthy set of boundaries to help deflect what is perceived as unacceptable behavior. It is up to us, the non-self-centered individuals, to establish these boundaries for self-care and our well-being.”

Tips for dealing with a self-centered person

It can be overwhelming to think about your next encounter with the self-absorbed person in your life, but you really shouldn’t overthink it. If you need a little help, keep these tips in mind.

“You cannot internalize these interactions, nor take them personally. Because the minute you begin to personalize these types of behaviors, you’re in trouble. This just sets you up to be manipulated in some way, shape or form or influences you in undesirable ways. Set limits. They’re going to do what they want, but it doesn’t have to impact the way that you do things.”

Alexander adds that establishing healthy boundaries will make it easier for you to communicate your needs during interactions with the self-centered people in your life. And if the dynamic is constantly stressful or draining, you need to withdraw.

Limit your interactions to positive ones

“Make time and space for positive interactions because there is some good there somewhere. On the other hand, limit how often you’re around self-absorbed people because it can make things much healthier for you. Also, limiting your exposure to someone who isn’t invested in you shouldn’t be hard because you’re not getting any reward in return. So, distance is often a necessary component.”

When the self-centered person is your partner

When a relationship is fresh, you might not pick up on your partner’s egotistical tendencies right away. But if you’ve been in a relationship for a while and you keep trying to appease them, that could speak to a much bigger issue —codependency.

“Codependency is best described as ‘My feelings of self-worth are solely based on how I get you to feel.’ That is a lot of work and it usually isn’t very beneficial. It also is unhealthy for individuals to live their lives from that frame of reference.”

If you find yourself in a situation like this, Alexander says it would be helpful to work with a mental health professional.

How to handle a self-centered coworker

Again, when it comes to self-absorbed people on the job, there’s a one and a million chance that you’ll be able to get through to them. Alexander recommends not even trying to. What you can do is focus on what matters most in this dynamic — yourself.

“If you go into it with the expectations that they’re going to start doing things differently, you’re going to have trouble because that’s in all likelihood not going to happen. If it’s the type of thing where, you’re up against a personality that you’re not fond of but they’re getting their job done efficiently, there’s very little that you can do. Besides, this personality doesn’t necessarily run parallel with the work ethic.”

That probably wasn’t the answer you expected, but if you need a surefire way to not let that egotistical coworker get under your skin, Alexander has this to say.

“The bottom line is this and it’s very universal. If you find yourself becoming frustrated, say to yourself, ‘The only person who I have control over is me. If someone wants to rent out space in my head, I’m the only one who can put out the vacancy sign.’”

How to Recognize Signs of Sociopathy

Constantly Down on Yourself? How To Stop Negative Self-Talk

Life After Divorce: How You Can Start Again 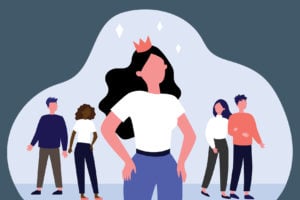 How to Handle a Self-Centered Person

Tired of being one-upped or disregarded by a self-absorbed person? Get three tips for dealing with self-centered people from a behavioral health therapist.