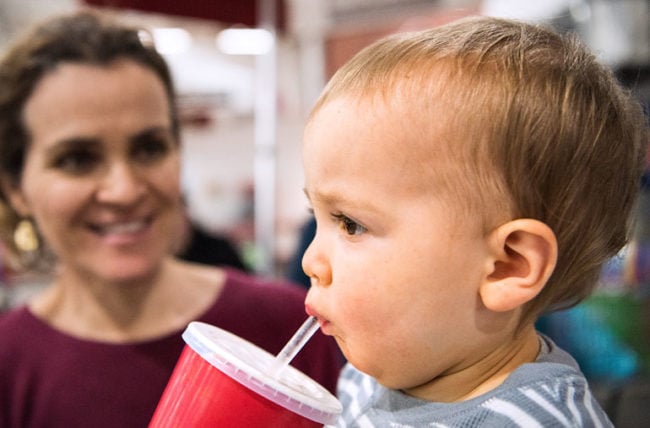 They say imitation is the sincerest form of flattery. But as a parent, there’s one daily habit you want to be sure your kids don’t pick up: your daily cup(s) of coffee.

“For kids, there are a lot of potential health implications of caffeine,” says pediatric endocrinologist Roy Kim, MD. So many, in fact, that the American Academy of Pediatrics says there’s currently no proven safe dose of caffeine for children.

Dr. Kim explains what you need to know about kids and caffeine, including what it can do and how much is safe.

Why is caffeine bad for kids?

So, what’s the big deal? Simply put: “There are a lot of potential health implications from having caffeine,” Dr. Kim says. And while people of all ages are susceptible to these effects, most healthy adults can handle some caffeine.

Kids, though, are extra-sensitive to caffeine’s effects. And when you pair that with the fact that they don’t necessarily have the wisdom and restraint to know when they’ve consumed too much, the result is that children and teens are perfectly poised to experience problems.

If you’re thinking, “My kid would never touch a cup of black coffee anyway,” you may be right, but coffee isn’t the only source of caffeine kids are likely to consume.

One study found that 73% of American kids ages 2 to 11 consume caffeine on a daily basis, with most of it coming from soda. Coffee and energy drinks (which became popular among kids in the early 2000s) are also a factor. And caffeine is found in tea, hot chocolate, and some candy, gum and mints, too.

Dr. Kim outlines some of the most pressing concerns associated with kids and caffeine.

If you’ve ever heard someone say that they only drink decaf in the afternoons, it’s probably because they have trouble sleeping after drinking late-day caffeine. Symptoms can include trouble falling asleep, frequent wake-ups and overall shorter duration of sleep.

Sleep disruptions are associated with all kinds of health issues in kids and adults alike, making caffeine particularly risky for young people who are still growing and developing.

“More and more, impaired sleep is recognized as a source of a lot of problems for child development, including things like low attention span and low alertness at school,” Dr. Kim notes. “It can also cause symptoms like headaches, and it can alter kids’ appetite and insulin levels, which may lead to other health issues.”

Other concerns associated with a lack of sleep include:

Remember that old song about being “alive, awake, alert, enthusiastic”? That’s what caffeine does. It stimulates your central nervous system, which makes you feel more perked up and attentive.

But too much caffeine can take it too far — and children are particularly sensitive to caffeine’s anxiety-inducing effects. Studies show that consuming high amounts of caffeine (like those found in energy drinks) is associated with higher levels of stress, depression and anxiety in kids.

And the fact that caffeine contributes to sleep problems only compounds things. “Sleep disturbances can decrease tolerance for stress, like handling sad news or stressful situations,” Dr. Kim says.

Any adult who’s tried to go without their daily latte knows that it’s not easy to quit a caffeine habit. That’s because at the end of the day, caffeine is, in fact, a drug, which is why quitting caffeine can cause shakiness, irritability and headaches.

“Caffeine is a stimulant, and it does have some addictive properties,” Dr. Kim explains. “In people who get used to it, going without it can cause them to crave it, to need to get that fix. And that’s not a good thing to see occurring in kids.”

Caffeinated products marketed to the younger crowd — like soda, energy drinks and those frou-frou coffee concoctions that taste more like milkshakes — are often laden with sugar. And sugar, of course, is associated with a variety of health problems.

“Caffeinated drinks often come loaded with sugar, so their consumption is directly tied to an increase in body weight and obesity,” Dr. Kim warns. Sugar is also associated with higher risks of:

At what age is caffeine OK?

Here’s the harsh truth: No amount of caffeine is proven safe for kids 12 and under. And guidelines say teens should consume no more than 100 milligrams of caffeine per day, which amounts to one cup of coffee or two cans of soda.

As for energy drinks? Just say no to them altogether. Because they’re not regulated by the U.S. Food and Drug Administration (FDA), there’s no way to know for sure how much caffeine is really in them, which can be dangerous for kids and adults alike. In fact, the American Academy of Pediatrics says energy drinks aren’t safe for kids, period.

Does Coffee Stunt Your Growth?

Is Your Kid Having Nightmares? Who Has Them and How You Can Help

Men, Is Waking Up to Pee Interrupting Your ZZZs? Try These 4 Tips

This Should Perk You Up: The Surprising Health Benefits of Coffee 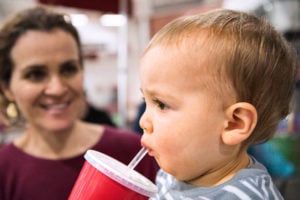 Is Caffeine Bad for Kids?

From a hot mocha-java to a frozen frou-frou concoction, to a zippy energy soda, caffeine tempts our kids at every corner. But is caffeine safe for kids? A pediatric endocrinologist explains.