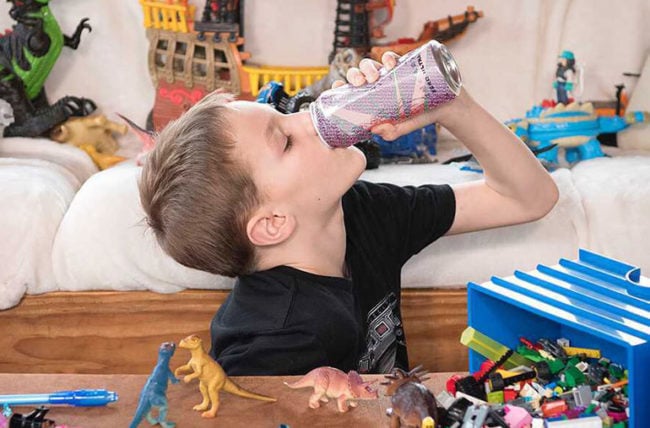 With their neon colors and flashy designs, energy drinks are oh-so-tempting to young eyes. So, when your tween is begging for a bottle of one and you’re tired of arguing, would it be the worst idea to cave and let them have one?

Pediatric dietitian Diana Schnee, MS, RD, CSP, LD says it’s best to steer clear. “These drinks are marketed in a way that’s really appealing,” Schnee says. “But they can be harmful to kids.”

Is caffeine bad for kids?

The U.S. Food and Drug Administration (FDA) doesn’t have official guidelines about kids and caffeine. But pediatric experts say kids under the age of 12 should avoid caffeine, and those over 12 should limit it to no more than 100 milligrams (about two cans of cola) per day.

If your kids sometimes drink caffeinated soda or enjoy an iced latte at the coffee shop, you might think that energy drinks aren’t much different. Think again.

The American Academy of Pediatrics says that energy drinks should be totally off-limits to kids and adolescents.

Plus, the FDA doesn’t regulate the amount of caffeine in beverages, Schnee says, so you can’t always trust what you see on the label. “A can might say it contains 200 milligrams but actually has 250. There’s no regulation.”

Here’s something else that parents might not be aware of. Many energy drinks contain a variety of stimulants besides caffeine, including herbal supplements or other natural stimulants from plants. That all adds up to a serious case of bouncing off the walls.

What’s the harm in a little energy boost? Energy drinks do more than make kids hyper. High amounts of caffeine can cause uncomfortable side effects and even harm a child’s health.

“Regularly consuming energy drinks puts the body in an elevated state of stress,” Schnee says. “Over time, that can affect children’s developing brains and cardiovascular systems.”

What age can you safely have energy drinks? Schnee says there’s no age at which she’d say energy drinks are A-OK. “I wouldn’t even recommend that adults drink them.”

Kids who drink a lot of caffeine and then quit can experience withdrawal symptoms, including:

How to get more energy naturally

How do you handle a kid who really wants to drink the stuff in the cool can? “Sit down and talk to them about it,” Schnee suggests. “Ask why they want it. Is it because their friends are drinking it? Or do they feel like they have low energy?”

If they complain of feeling sluggish, you can work together to find natural ways to give them a boost. Schnee suggests starting with the basics:

“Rather than just putting a caffeinated bandage on the problem, look for ways to give them a jump-start,” she says.

Many kids are simply tempted by the colors and flavors of energy drinks. So help them find alternative beverages. True, caffeine-free soda is an option, but there are healthier choices that aren’t full of sugar.

Bottom line? Like buying your kids a pony or letting them have ice cream for every meal, put energy drinks on your “not gonna happen” list. End of discussion. “There are better ways to get energy,” Schnee says.

Is Caffeine Bad for Kids?

The Buzz About Coffee, Chocolate and the Caffeine We Consume

Playdates: Are They Safe During the COVID-19 Pandemic?

What To Do if Your Kid Eats a Button Battery 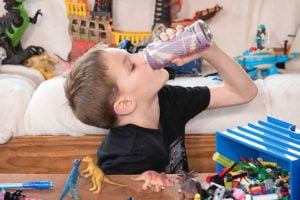 With neon colors and flashy designs, energy drinks are tempting for kids. But these high-caffeine drinks can cause health problems for kids and adolescents. Find out why they should be avoided from a pediatric dietitian.